In somewhat similar situation to major flooding in The Balkan Peninsula during May 2014 parts of American East experienced what some local officials call "unprecedented deluge" over the last couple of days when a slow-moving storm system dropped record breaking rainfall and caused historic flooding. Parts of New York state saw an entire summer's worth of rain in just 12 hours.

After thunderstorms and historic rainfall on Monday, August 11, Detroit metro area and parts of southeast Michigan experienced one of the worst flooding in their history. The Weather Channel reported that "some of the heaviest rain came in the 6 p.m. hour, when 1.24 inches (31.4 mm) of rain fell at Detroit Metropolitan Airport in just 24 minutes, part of a record-breaking 4.57 inches (116 mm) of total rainfall for the day."

It was Detroit's heaviest rain day in 89 years. Three people died and thousands of motorists were caught on flooded freeways during the afternoon rush.

One person died in a traffic accident on Long Island Expressway.

Dramatic before and after photos of flooded backyard in West Islip, NY http://t.co/ENPFVICXTt pic.twitter.com/DCVmXq2lT7

Other parts of US

A hospital in Nebraska was dramatically flooded over the weekend. There were no injuries, but there was significant damage to the hospital which could remain closed for some time.

Several houses were inundated with flood water thigh high after heavy rainfall early Wednesday, August 13. A storm dumped around 2 inches (50 mm) of rain in a two-hour period, pushing levels of the Kelsey Creek to overflow into nearby homes. The storm also caused damage elsewhere, leaving 4 000 homes without power.

3.55 inches (90 mm) of rain fell in 24 hours between August 13 and 15 in the Phoenix area, Arizona. Several houses were inundated in the south Mountains area of the city. (Floodlist)

Signs of a wetter future

In their yesterday's article, The Weather Channel explains if the extremity of recent rainfall is solely a reflection of a favorable sluggish weather pattern, or is the Earth's changing climate also playing the role?

Quote from the article: "The National Climate Assessment, a report compiled by 300 scientists and experts released in May 2014, offered compelling evidence that, in fact, heavy rain events are becoming, well, heavier in parts of the U.S.

Specifically, the NCA report first concluded that the intensity of heavy rain events is increasing nationwide, with the greatest rises occurring in the Northeast and Midwest (see map at right). In other words, the heaviest rain events are producing more rain now than in the middle of the 20th Century, particularly in the eastern half of the nation."

They further explain that these heavy rain events are becoming more frequent, as you can see in the graph below, taking off particularly since the 1980s. 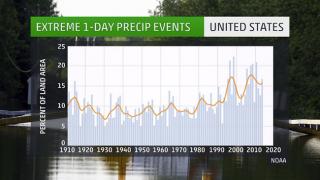 Future climate forecasts suggest the number of heavy rain events will continue to rise nationwide, even in regions where overall less precipitation is expected, such as the Desert Southwest, according to the NCA report. (TWC)

Read the rest of their article here.