CSIRO has used solar energy to generate hot and pressurised ‘supercritical’ steam, at the highest temperatures ever achieved in the world outside of fossil fuel sources.

Supercritical steam is a breakthrough for solar energy and means that one day the sun could be used to drive the most advanced power stations in the world, currently only driven by coal or gas.

"It's like breaking the sound barrier; this step change proves solar has the potential to compete with the peak performance capabilities of fossil fuel sources.

"Instead of relying on burning fossil fuels to produce supercritical steam, this breakthrough demonstrates that the power plants of the future could instead be using the free, zero emission energy of the sun to achieve the same result," Dr Wonhas said.

Supercritical solar steam is water pressurised at enormous force and heated using solar radiation. Around 90 per cent of Australia's electricity is generated using fossil fuel, but only a small number of power stations are based on the more advanced supercritical steam.

The world record, set in May this year, was at a pressure of 23.5 megapascals (a measure of force per unit area), and temperatures up to 570 degrees Celsius. It is the combination of pressure and temperature demonstrated at scale that makes this such a breakthrough for solar power.

Commercial solar thermal power plants around the world use subcritical steam, operating at similar temperatures but at lower pressure. If these plants were able to move to supercritical steam, it would increase the efficiency and help to lower the cost of solar electricity. 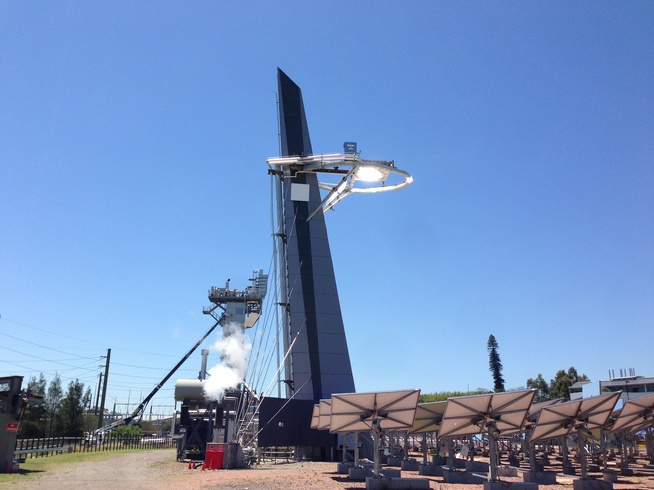 The $5.68 million research program is supported by the Australian Renewable Energy Agency (ARENA) and is part of a broader collaboration with Abengoa Solar, the largest supplier of solar thermal electricity in the world. CSIRO and Abengoa Solar, with support from ARENA, are developing advanced solar storage to provide solar electricity at any time, day or night.

Although there is still work to be done before this technology is ready for commercialisation, ARENA CEO Ivor Frischknecht acknowledged the significant achievement saying it demonstrates the importance of research and development.

CSIRO, the Commonwealth Scientific and Industrial Research Organisation, is Australia's national science agency and one of the largest and most diverse research agencies in the world.