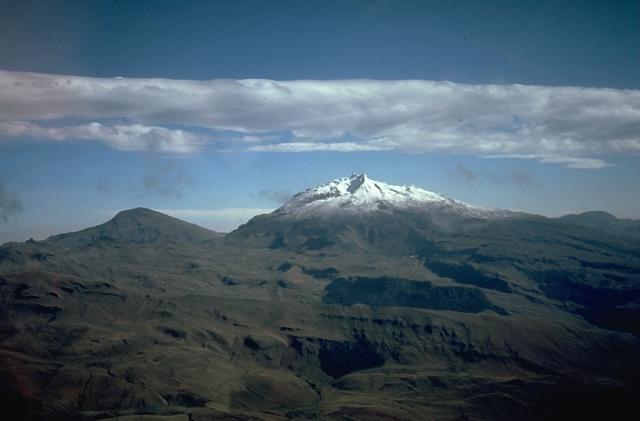 Alert level of the twin-volcanoes Cerro Negro de Mayasquer and Chiles (Colombia-Ecuador border) has been raised to yellow in response to an ongoing seismic crisis and deformation. Seismicity is being detected since November 2013, when a new monitoring network had been installed.

INGEOMINAS reported that seismic activity has remained elevated and that so far, more than 60 000 small earthquakes at shallow depths (1 – 6 km) have been recorded since November 2013. The epicenters were between 3 – 5 km SW of the Chiles volcano, while deformation affects neighboring Cerro Negro volcano to the west. Several of them were felt by people living close by. The largest quake so far was a magnitude 4.5 event that was felt widely.

Colombian volcanologists mapped the risk zones for each of the two volcanoes. Neither of them has recorded historical eruptions and little is known about their activity. Whether or not the current unrest leads to an eruption in a near or medium-term future (months, years), and if so, which of the two volcanoes would be involved is unknown.

Since the location of the volcanoes is at the Ecuadorian border, the Ecuadorian civil defense SNGR (Secretaría National Management Riesgos) also raised an yellow alert for the potentially affected area in Ecuador. (VD)

Cerro Negro de Mayasquer, astride the Colombia-Ecuador border, is a stratovolcano with a caldera open to the west. Andesitic and dacitic lava flows are of possible Holocene age (Hall 1992, pers. comm.). Solfataras are found on the shore of a small crater lake. An historical eruption reported in 1936 may have been from Reventador (Catalog of Active Volcanoes of the World).

The higher, glacier-covered summit of the Pleistocene Chiles stratovolcano lies only 3 km to the SE. Chiles last erupted about 160,000 years ago, but has hot springs and an active hydrothermal system at its eastern flank. (GVP)