The “seismic crisis” around the region of the Chiles and Cerro Negro de Mayasquer volcanoes near the Columbia-Ecuador border is likely caused by intruding magma, according to a report by R. Corredor Torres of the Servicio Geológico Colombiano and colleagues presented at the annual meeting of the Seismological Society of America (SSA). 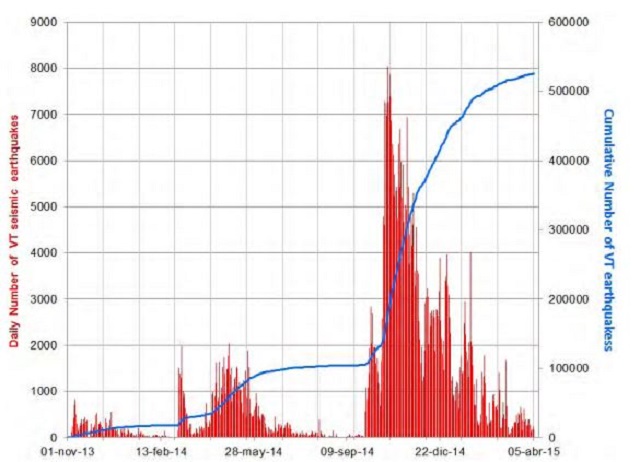 Daily number of Volcano Tectonic earthquakes that occured in the region of Chiles and Cerro.Negro volcanoes between November 2013 and April 2015. In blue, the cumulative number is shown.

The intruding magma appears to be interacting with the regional tectonics to spawn micro-earthquakes, which at their peak of activity numbered thousands of microearthquakes each day. Most of the earthquakes were less than magnitude 3, although the largest quake to date was magnitude 5.6 that took place in October 2014. When the earthquake swarms began in 2013, the Colombian Servicio Geológico Colombiano and the Ecuadoran Instituto Geofísico of the Escuela Politécnica Nacional collaborated to set up a monitoring system to observe the swarms and judge the risk of volcanic eruption for the surrounding population.

The largest perceived threat of eruption came in the fall of 2014, when the activity level was changed from yellow to orange, meaning a probable occurrence of eruption in days to weeks. Due to the occurrence of a magnitude 5.6 earthquake and subsequent aftershocks, some houses in the area were damaged and local residents decided to sleep in tents to feel safe, accepting support from the Colombian Disaster Prevention Office, said Torres. 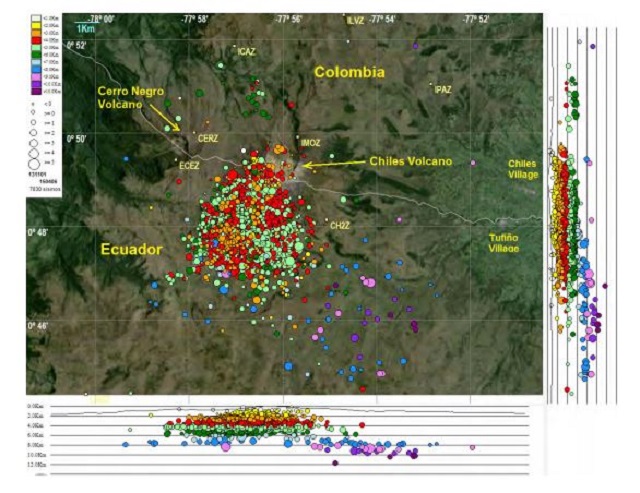 Hypocentral locations of the Volcano Tectonic earthquakes that occured in the region of Chiles and Cerro.Negro volcanoes between November 2013 and April 2015. The colors in the circles represent the depth range of the events and the size corresponds to the range in magnitude.

Data collected by the new monitoring stations suggest that most of the earthquakes in the area are of a type of volcano-tectonic quakes, which occur when the movement of magma–and the fluids and gases it releases–creates pressure changes in the rocks above. Based on the seismic activity in the area, the researchers infer that millions of cubic meters of magma have moved into the area deep under the Chile and Cerro Negro volcanoes.

However, both volcanoes appear to have been dormant for at least 10,000 years, and the tectonic stress in the region is compressive—both of which may be holding the magma back from erupting to the surface. So far, there have been no signs of ground swelling or outgassing at the surface, and the rate of earthquakes has slowed considerably this year from its peak of 7000 – 8000 micro-quakes per day in the fall of 2014.