Rosetta, a unique ESA's comet-hunting spacecraft, captured first images of its destination comet 67P/Churyumov–Gerasimenko on March 20, 2014. If everything goes by the plan this solar-powered spacecraft will become the first space mission to rendezvous with a comet, the first to attempt a landing on a comet’s surface, and the first to follow a comet as it swings around the Sun.

Since its launch in 2004, Rosetta has made three flybys of Earth and one of Mars to help it on course to its rendezvous with 67P/Churyumov-Gerasimenko, encountering asteroids Steins and Lutetia along the way. 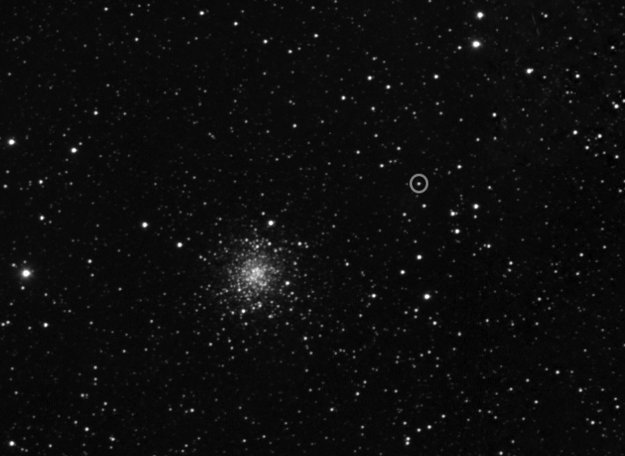 Rosetta’s launch was originally scheduled for January 2003 on an Ariane-5 rocket. Its target at that time was Comet 46P/Wirtanen, with the encounter planned for 2011. However, following the failure of the first Ariane ECA rocket, in December 2002, ESA and Arianespace took the joint decision not to launch Rosetta during its January 2003 launch window. This meant that Rosetta’s intended mission to Comet 46P/Wirtanen had to be abandoned.

In May 2003, a new target comet and launch date for Rosetta were selected: the spacecraft was launched in March 2004 and will meet its new target, 67P/Churyumov-Gerasimenko, in August 2014.

ESA’s comet-chaser will be the first to undertake a lengthy exploration of a comet at close quarters. After entering orbit around Comet 67P/Churyumov-Gerasimenko in 2014, Rosetta will release its Philae small lander onto the icy nucleus.

As the most primitive objects in the Solar System, comets carry essential information about our origins. Their chemical compositions have not changed much since their formation, therefore reflecting that of the Solar System when it was very young and still ‘unfinished’, more than 4600 million years ago. By orbiting Comet 67P/Churyumov-Gerasimenko and landing on it, Rosetta will allow us to reconstruct the history of our own neighbourhood in space.

Rosetta will also help to discover whether comets contributed to the beginnings of life on Earth. Comets are carriers of complex organic molecules, delivered to Earth through impacts, and perhaps played a role in the origin of life. Moreover, volatile light elements carried by comets may also have played an important role in forming Earth’s oceans and atmosphere.

During its long journey, Rosetta was scheduled to have two close encounters with asteroids of the main asteroid belt that lies between the orbits of Mars and Jupiter. The first was with (2867) Steins, a rare E-type asteroid. The flyby started on August 4, 2008 with optical navigation of the asteroid itself – a technique never before used in ESA spacecraft operations. The closest approach was on September 5, 2008, 18:58:19 UTC, when (2867) Steins was 2.14 AU from the Sun and 2.41 AU from Earth. The encounter occurred with a relative velocity of 8.62 km/s and reached a minimum distance of 802.6 km. The flyby took place on the Sun side of the asteroid in the plane defined by the relative velocity and the Sun direction. The flyby strategy allowed continuous observations of the asteroid before, during and after closest approach as well as passing through phase angle zero. To keep the asteroid in the field of view of the scientific instruments during the closest approach phase, the spacecraft had to target with an accuracy of better than 2 km and to perform an attitude flip manoeuvre lasting 20 minutes, after which autonomous tracking of the asteroid started.

On July 10, 2010 Rosetta had its second asteroid close encounter, this time with (21) Lutetia, a large asteroid (dimensions: 126 km x 103 km x 95 km – about 10 times bigger than Steins). The flyby was a spectacular success with Rosetta performing faultlessly, passing the asteroid at 15 km/s.  The spacecraft had its closest approach at 15:44:57 UTC, at a distance of 3162 km. The cameras and other instruments had been working for hours and in some cases days before and after closest approach providing important new insights about the nature of this heavily cratered asteroid that has suffered many impacts during its 4.5 billion years of existence.

The total cost of the mission is 1.3 thousand million Euro. This includes the launch, the spacecraft, the science payload (instruments and lander) and mission and science operations.