A quick glance at two, unequal groups of paper clips (or other objects) leads most people to immediately intuit which group has more. In a new study, researchers report that practicing this kind of simple, instinctive numerical exercise can improve children's ability to solve math problems.

A report of the study appears in the journal Cognition.

"We wanted to know how basic intuitions about numbers relate to mathematics development," said University of Illinois psychology professor Daniel Hyde, who conducted the study with Saeeda Khanum, of Quaid-i-Azam University in Islamabad, and Elizabeth Spelke, of Harvard University. "Specifically we wanted to know whether thinking intuitively about numbers, such as approximating and comparing sets without counting, helps in actually doing math."

To test this, the researchers asked first-graders to practice tasks that required them to approximate, or roughly evaluate the number of objects in a set without counting them. Other children did tasks such as comparing the brightness of two objects or adding the lengths of lines.

Children who practiced evaluating the number of objects performed better on arithmetic tests immediately afterward than did their counterparts who evaluated other qualities of objects, Hyde said. 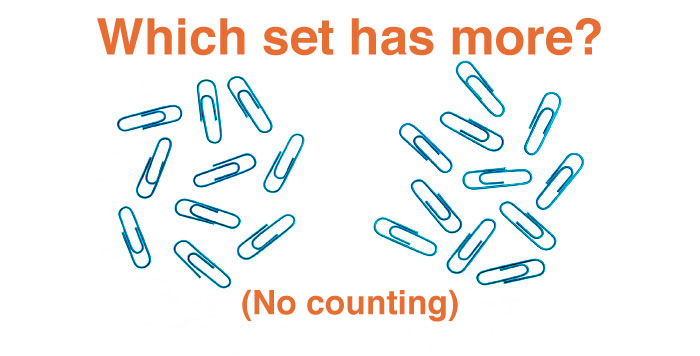 Getting children to think intuitively about numbers — by asking them to approximate or compare two sets of objects without counting — boosts their ability to do arithmetic, researchers report. Photo courtesy of L. Brian Stauffer

"These results showed that brief practice with tasks requiring children to guess or intuit the number of objects actually improved their arithmetic test performance," he said.

Additional experiments helped the team rule out other factors – such as greater motivation or level of cognitive engagement – that might contribute to the guessers' enhanced math performance. The researchers also varied the difficulty of the arithmetic tests to see if the benefits of practicing intuitive judgments about the number of objects enhanced the children's speed or accuracy, or both.

"For easier problems, where all children are very accurate, those who practiced engaging what we call their 'intuitive sense of number' performed roughly 25 percent faster than children practicing a control task," Hyde said. "For more difficult problems, children engaging their intuitive sense of number scored roughly 15 percentage points higher than those practicing a control task. If this were a real quiz in school, these children would have scored about a letter grade and a half higher than those in the control conditions."

Similar improvements were not seen on a verbal test, "suggesting the enhancing effect is specific to mathematics and is not due to general motivation or interest in the training task," Hyde said.

"Previous studies have tested whether children who are better at intuitive number tasks also have higher math grades or perform better on math tests. There the answer is yes," Hyde said. "Our study is the first to provide a causal link in children. We showed that practice on these kinds of tasks actually causes better math performance in children."

The paper, "Brief, Non-Symbolic, Approximate Number Practice Enhances Subsequent Exact Symbolic Arithmetic in Children," is available online or from the U. of I. News Bureau.

Source: University of Illinois at Urbana-Champaign