Powerful Atlantic storm named Xaver, the worst since 1953, has tracked east to the north of Scotland overnight, bringing very strong winds across northern parts of the UK. Severe storm and flooding warnings are in effect for the UK, Netherlands, Denmark, Belgium and Germany. Western and southern Norway are also bracing for the pending storm.

Automatic weather stations in mountainous region of Scotland recorded wind speeds of near 300 km/h this morning. In urban areas of Scotland measured wind speeds reached 228 km/h, which is equivalent to category 4 hurricane (Saffir-Simpson scale). Below is the video recorded by Mark Vogan at  Stranraer, SW Scotland:

The maximum storm tide of Xaver is expected in Germany and Denmark, and will be unusually high, since we are only two days past the new moon. German coast is well protected by 8 meters high dikes, which are able to withstand Xaver's storm surge. Night-flood or the morning-flood on the North Sea coast is expected to range between 2.5 and 3 meters in the Elbe region and 3 to 3.5 meters higher than the average flood.

Highest level warnings (Level 3) are issued for coastal areas of Belgium and Netherlands.

Belgian Bredene is now partially evacuated. Around 02:00 – 03:00 am local time sea level is expected to rise for about 6.30 meters. That region experienced sea level rise of 6.66 meters in 1953 when many lives were lost. 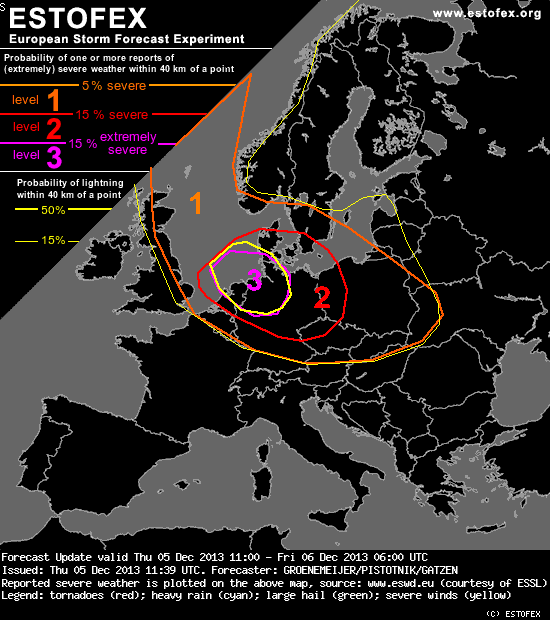 Thousands are evacuated from homes in England as the east coast braces for the worst tidal surge in 60 years. Casualty reports are already coming in.

UK Met Office National Severe Weather Warnings are in force for strong winds. There has been significant disruption to travel across Scotland and public should be prepared for significant disruption across Northern England during the rest of the day on Thursday. There have been widespread gusts of 100 – 130 km/h (60 – 80 mph) and some exposed mountain sites have registered gusts of well over 160 km/h (100 mph). 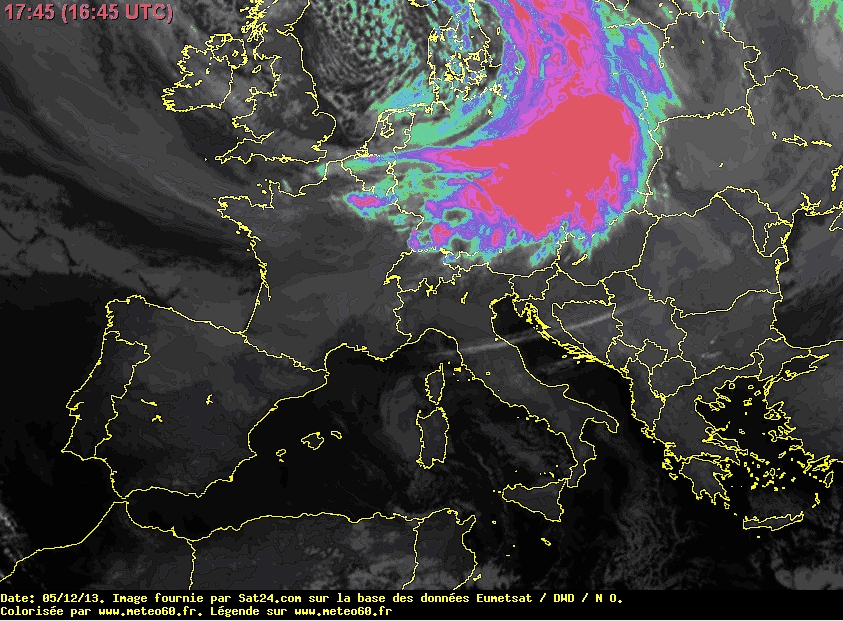 The strongest winds in UK are expected to decrease in strength later today, but while the most severe weather subsides the risk of coastal flooding is set to increase.

This is because of high tides combining with strong winds, big waves and a storm surge. The coastal surge along the East Coast of England is expected to be the worst for more than 60 years.

Police are urging residents in parts of Flintshire to leave their properties due to a 'severe risk of flooding'. North Wales Police said the specific areas which need to be evacuated are Talacre, Ty’n Y Morfa, Dee Bank, Boot, Welston, Walwen and the Greenfield Business Park. Schools in Flintshire have also been closed because of the weather conditions.

Northern Ireland Electricity said 6 500 homes were without power after severe gale force winds with gusts of 100 km/h (60 mph) damaged the power network while another 10 000 customers lost power but had their services restored during the night. (Reuters)

The Netherlands braced for the storm by closing water barriers that protect the low-lying country from high tides. The Oosterscheldekering in the south-western delta region of the country was being closed to protect the land behind it for the first time since 2007. National carrier KLM canceled dozens of flights to European airports as a precaution. 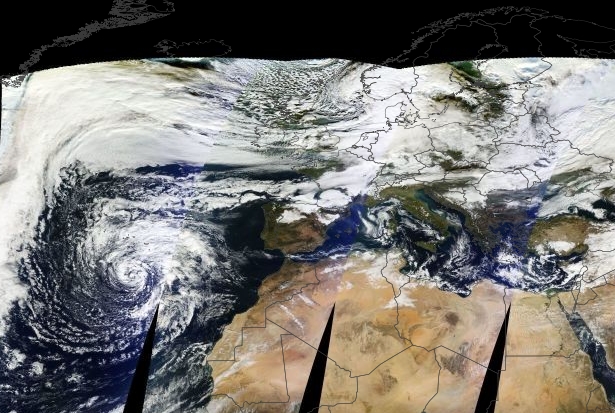 This NASA Terra/MODIS image was taken on December 5, 2013.

Weather forecasters predicted winds gusting up to 140 km/h on Germany's North Sea coast. Ferry operators canceled services to some of Germany's North Sea islands and the country's national railway, Deutsche Bahn, warned of likely disruption across a swathe of northern Germany. The German Weather Service said the storm front, which was gathering strength as it headed eastwards from the Atlantic Ocean off Greenland, would also bring polar air to Europe – meaning that it could bring snow to low-lying areas.

Authorities in Germany's northern port city of Hamburg issued public warnings about the winds, which some forecasters are saying could be as powerful as a deadly storm and ensuing flood that hit the city in 1962 and killed 315. (Reuters) 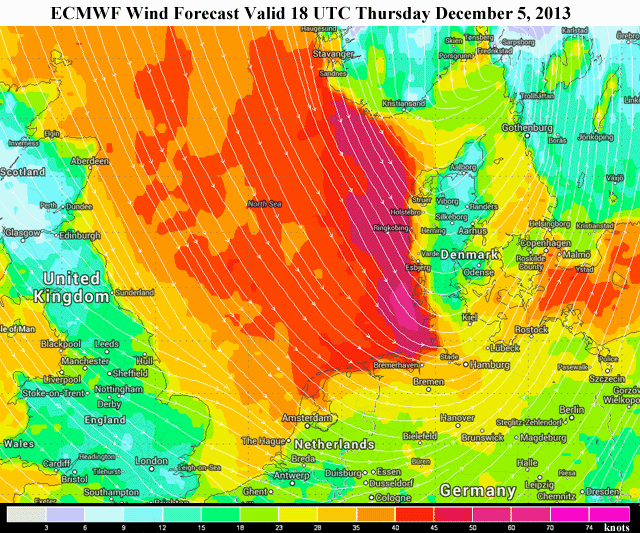 Storm surges were feared Thursday off the coast of Jutland in western Denmark, the Danish weather service DMI said. DMI also forecast hurricane-force gales would sweep across the country. Danish train operator DSB said it would reduce traffic on its local and regional train routes. The move was to avoid trains being stranded on tracks because of severed power lines and to reduce the risk of being hit by falling trees or debris. 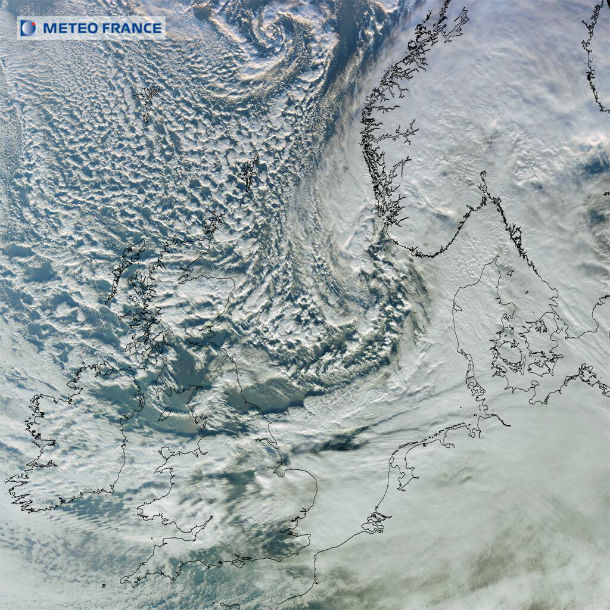