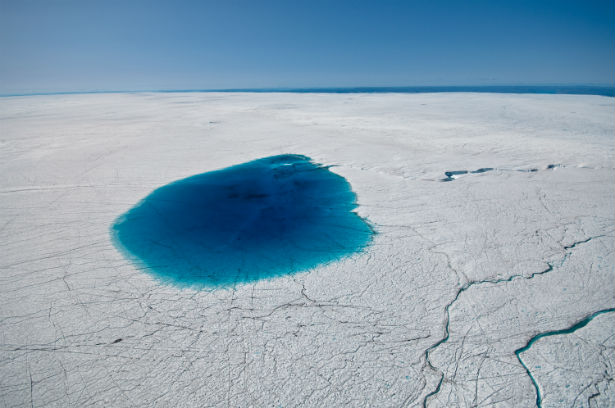 According to recently published study, two massive subglacial lakes have been discovered 800 meters beneath surface of the melting Greenland Ice Sheet. Lakes discovered by researchers from the Scott Polar Research Institute (SPRI) at the University of Cambridge are each around 8-10 km2 in size, and at one point may have been up to three times larger than their current size.

Nearly 400 lakes have been detected beneath the Antarctic ice sheets, but these are the first identified in Greenland. However, these subglacial lakes are formed in a different manner compared to Antarctic subglacial lakes. While surface temperatures at Antarctic remain below freezing all year round, the newly discovered lakes are most likely fed by melting surface water draining through cracks in the ice. A surface lake situated nearby may also replenish the subglacial lakes during warm summers. This means that the lakes are connected to the surface and are part of an open system, while Antarctic lakes that are most often isolated ecosystems.

The ice in Greenland is also thinner than that in Antarctica, resulting in colder temperatures at the base of the ice sheet. This means that any lakes that may have previously existed would have frozen relatively quickly. The thicker Antarctic ice can act like an insulating blanket, preventing the freezing of water trapped underneath the surface.

“Our results show that subglacial lakes exist in Greenland, and that they form an important part of the ice sheet’s plumbing system,” said lead author Dr Steven Palmer, formerly of SPRI and now at the University of Exeter.

“Because the way in which water moves beneath ice sheets strongly affects ice flow speeds, improved understanding of these lakes will allow us to predict more accurately how the ice sheet will respond to anticipated future warming.” (Source) 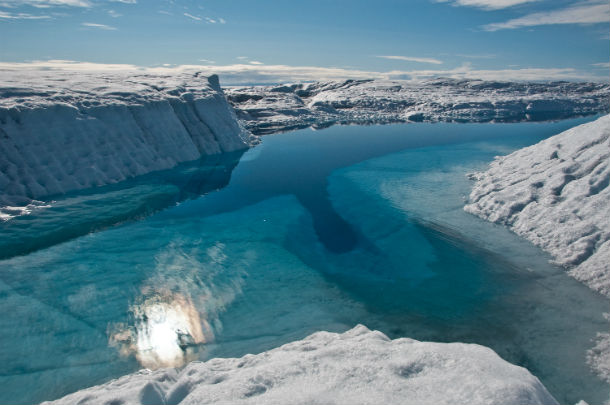 Example of deep pool through which a substantial volume of water appears to have flowed is likely the site of the moulin that formed in 2006. (Credit: Big Ice/Polar Science Center)

According to Dr Palmer, new results show that subglacial lakes in Greenland form an important part of the ice sheet’s plumbing system. The apparent absence of lakes in Greenland had previously been explained by the fact that steeper ice surface in Greenland leads to any water below the ice being ‘squeezed out’ to the margin.

As many surface melt-water lakes form each summer around the Greenland ice sheet, the possibility exists that similar subglacial lakes may be found elsewhere in Greenland.

The new research was done by utilizing airborne radar measurements to peer underneath of the massive ice sheet. It’s currently thought that the behavior of subglacial lakes have a significant impact on the flow of ice sheets, exercising a great impact on the rate of any potential sea level rise that we may experience in the near-future. Because the way in which water moves beneath ice sheets strongly affects ice flow speeds, so improved understanding of these lakes will allow scientists to predict more accurately how the ice sheet will respond to anticipated future warming.

The new findings were detailed in a paper published in the journal Geophysical Research Letters.