Locusts are grasshoppers with some rather unique abilities. Overcrowding triggers their instinct to literally transform themselves.They change their color from green to brown, get more muscular, eat more, mate more and congregate in crowds.

After their transformation, they traverse the land searching for food, colonizing and recolonizing breeding grounds.

Around dozen spcies of locusts have been discovered so far, but only one species live in North America – the Rocky Mountain locust.

They are responsibile for the devastation of crops across the Great Plains from 1850-1890. Interestingly the locusts prefered the cultivated crops to prairie grasses which, of course, caught the attention of white settlers. It is reported that one observer in Nebraska testified a one-mile-high swarm of locusts pass overhead for five days straight. By using telegraph reports from neighboring towns, he estimated the swarm to be 110 miles wide and 1800 miles long, roughly twice the size of Colorado.

The Rocky Mountain locust (Melanoplus spretus) was the locust species that ranged through the western half of the United States and some western portions of Canada until the end of the 19th century. Sightings often placed their swarms in numbers far larger than any other species of locust, with one famed sighting estimated at 198,000 square miles (513,000 km²) in size (greater than the area of California), weighing 27.5 million tons, and consisting of some 12.5 trillion insects – the greatest concentration of animals ever speculatively guessed, according to The Guinness Book of Records.

Less than 30 years later, the species was apparently extinct. The last recorded sighting of a live specimen was in 1902 in southern Canada. Because a creature so ubiquitous was not expected to become extinct, very few samples were ever collected (though a few preserved remains have been found in Grasshopper Glacier, Montana). Though grasshoppers still cause significant crop damage, their populations do not approach the densities of true locusts. Had the Rocky Mountain locust survived, North American agriculture would likely have had to adapt to its presence (North America is the only continent without a major locust species outside of Antarctica). 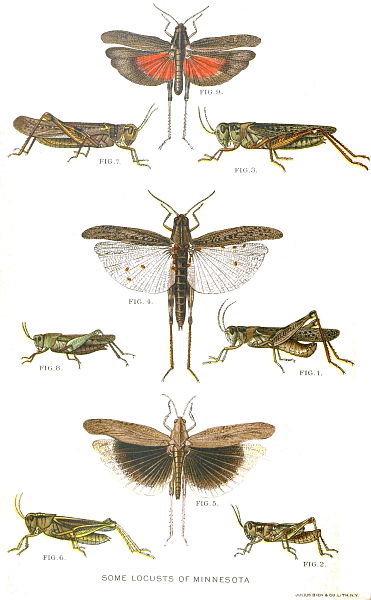 The locust largely afflicted prairie areas, though they existed on both sides of the Rocky Mountains. Breeding in sandy areas and thriving in hot and dry conditions, they were often guaranteed a good food supply by prairie plants concentrating sugars in their stalks in times of drought. Movement of the locusts was probably assisted by a low-level jet stream that persists through much of central North America.

The last major swarms of Rocky Mountain locust were between 1873 and 1877, when the locust caused $200 million in crop damage in Colorado, Kansas, Minnesota, Missouri, Nebraska, and other states. The cause of their extinction was probably the plowing and irrigation by settlers that disrupted the natural life cycle of the insects in the very small areas where they lived in between swarms. Reports from this era suggest that farmers killed over 150 egg cases per square inch while plowing, harrowing or flooding.Because locusts are a form of grasshopper that appear when grasshopper populations reach high densities, it was theorized that M. spretus might not be extinct, that "solitary phase" individuals of a migratory grasshopper might be able to turn into the Rocky Mountain locust given the right conditions. However, breeding experiments using many grasshopper species in high-density environments have attempted to invoke the famous insect without success. Analysis of mitochondrial DNA from museum specimens and related species suggests that the Rocky Mountain locust was a distinct and now extinct species, possibly closely related to the Bruner spurthroat grasshopper (Melanoplus bruneri) (Wikipedia).