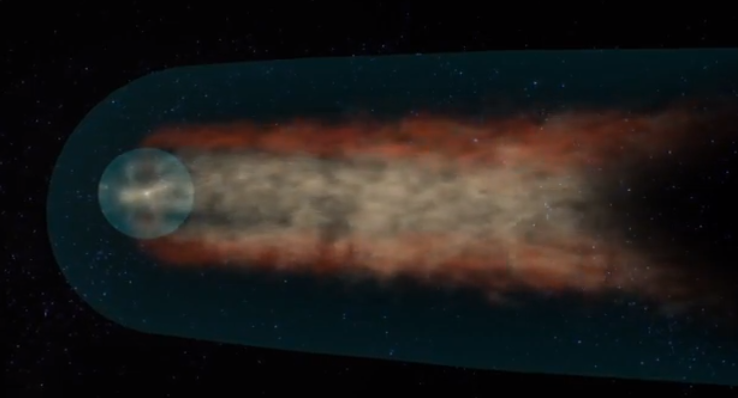 Researchers have long theorized that, like a comet, a "tail" trails the heliosphere, the giant bubble in which our solar system resides, as the heliosphere moves through interstellar space. Now for the first time we have data about it. 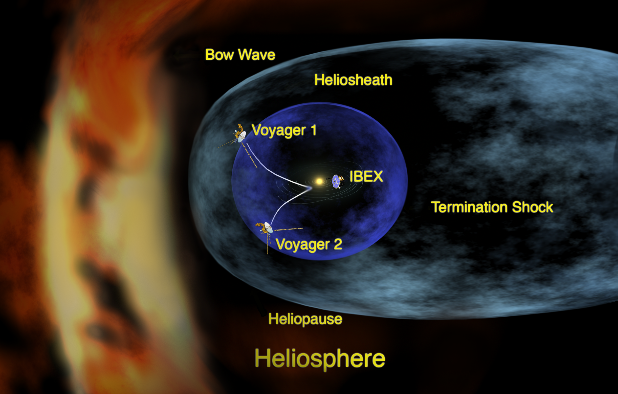 An artist's concept of our heliosphere, which is a bubble in space created by the solar wind and solar magnetic field. Credit: NASA

The first IBEX images released in 2009 showed an unexpected ribbon of surprisingly high energetic neutral atom (ENA) emissions circling the upwind side of the solar sys item. With the collection of additional ENAs over the first year of observations, a structure dominated by lower energy ENAs emerged, which was preliminarily identified as the heliotail. However, it was quite small and appeared to be offset from the downwind direction, possibly because of interactions from the galaxy's external magnetic field.

As the next two years of IBEX data filled in the observational hole in the downwind direction, researchers found a second tail region to the side of the previously identified one. The IBEX team reoriented the IBEX maps and two similar, low-energy ENA structures became clearly visible straddling the downwind direction of the heliosphere, indicating structures that better resemble "lobes" than a single unified tail. 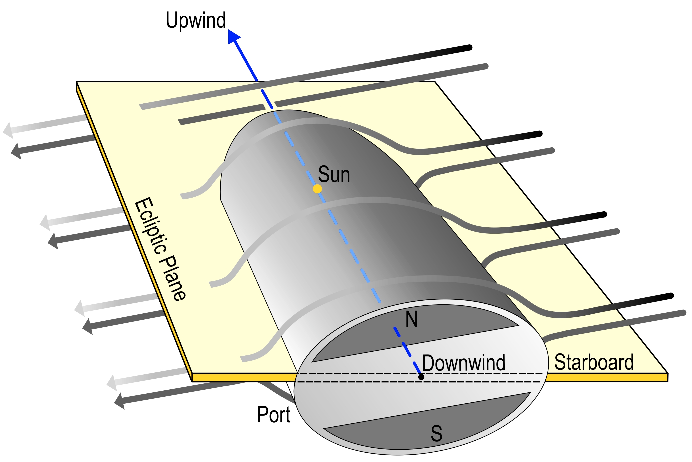 Schematic diagram of heliotail as the interstellar magnetic field that surrounds our heliosphere squeezes and rotates the tail structure as seen in the IBEX observations. Figure taken from McComas et al. [ApJ, 2013].

"We're seeing a heliotail that's much flatter and broader than expected, with a slight tilt," said David McComas, IBEX principal investigator. "Imagine sitting on a beach ball. The ball gets flattened by the external forces and its cross section is oval instead of circular. That's the effect the external magnetic field appears to be having on the heliotail."

"We often think we know what we're going to study in science, but the work sometimes takes us in unexpected directions," says McComas. "That was certainly the case with this study, which started by simply trying to better quantify the small structure incorrectly identified as an 'offset heliotail.' The heliotail we found was much bigger and very different from what we expected."

Heliotail is shaped like a four-leaf clover and shows a combination of fast and slow moving particles. The entire structure twisted, because it experiences the pushing and pulling of magnetic fields outside the solar system.  IBEX scientists described their findings in a paper published in the July 10, 2013 edition of the Astrophysical Journal.

Scientists do not know how long the tail is, but think that it eventually fades away and becomes indistinguishable from the rest of interstellar space. They are testing their current computer simulations of the solar system against the new observations to improve our understanding of the comet-like tail streaming out behind us. 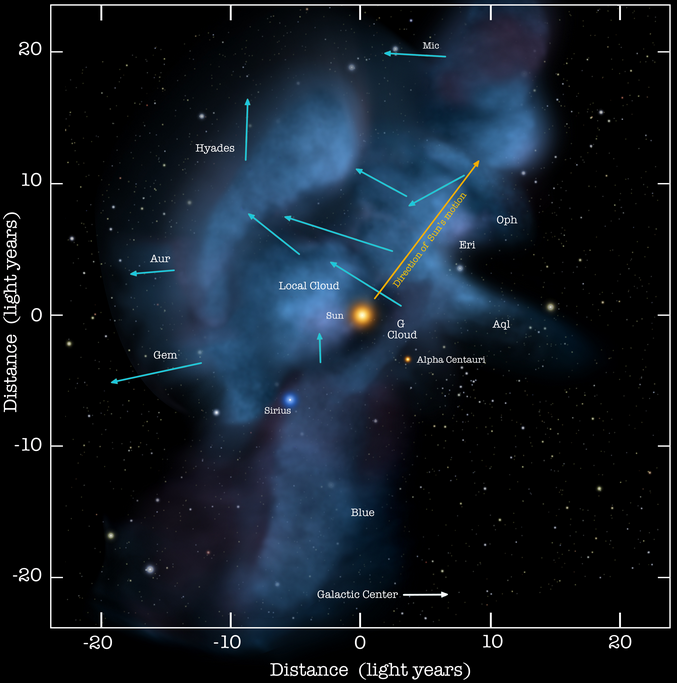 The solar journey through space is carrying us through a cluster of very low density interstellar clouds. Right now the Sun is inside of a cloud that is so tenuous that the interstellar gas detected by IBEX is as sparse as a handful of air stretched over a column that is hundreds of light years long. These clouds are identified by their motions. Labels. Credit: NASA/Adler/U. Chicago/Wesleyan