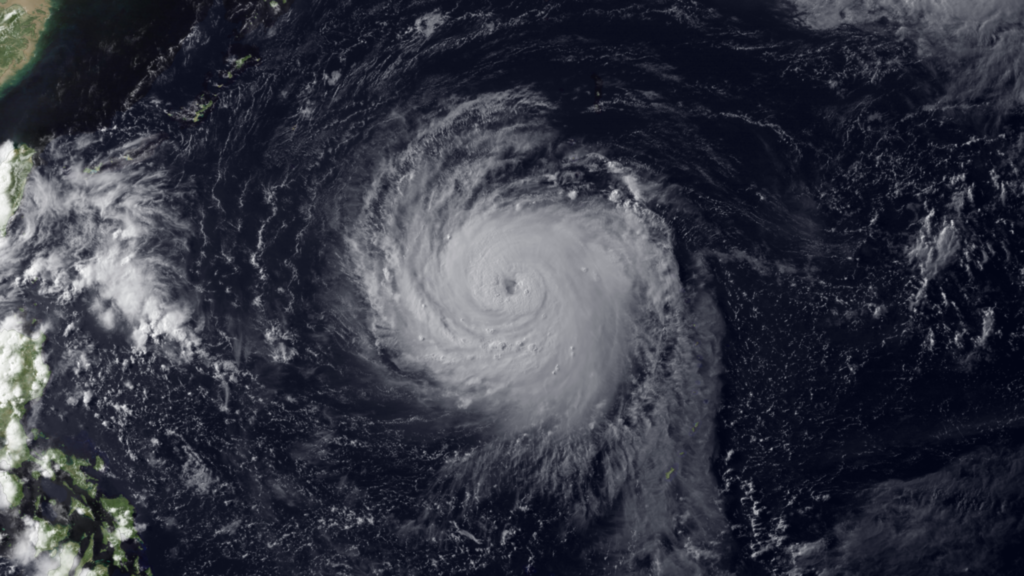 Typhoon Soulik has entered the Philippine Area of Responsibility (PAR) on July 10, 2013 and PAGASA is monitoring the development. PAGASA named this system as Huaning, its international name is Soulik.

Soulik formed on July 7, 2013 and quickly intensified to become the strongest tropical system of the 2013 Western Pacific typhoon season so far. It shows little sign of slowing down.

Numerical models point the system to directly impact Okinawa-Ryukus (Miyako-Jima and Ishigaki) on July 11, 2013 and northernmost tip of Taiwan on July 12, 2013 as a strong Category 4 or 3 typhoon system based on the Saffir Simpson Scale. Soulik will target east China coast around July 13/14, 2013 with heavy rain and coastal flooding.

On its current forecasted track, Soulik will make a direct hit at Taipei, Taiwan, which is one of the most densely populated cities in the world. Residents can expect howling winds, huge storm surge and torrential rains that can cause massive flooding the mountainous regions that surround Taipei. 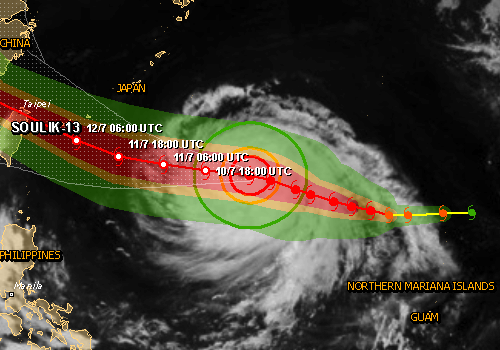 With its current location, the typhoon is expected to bring rains over extreme north Luzon, Philippines. Pagasa said residents in Batanes will experience winds from 45 to 60 km/h. The typhoon will also bring estimated rainfall amount of 10 to 25 millimeters per hour (heavy – intense) within it 800 kilometers diameter, said the weather bureau. Pagasa forecast Huaning to be out of the Philippine Area of Responsibility by Saturday afternoon.

According to latest report by Joint Typhoon Warning Center (JTWC) issued at 09:00 UTC on July 10, 2013, Typhoon Soulik (TY 07W) was located approximately 482 nm southeastward of Kadena AB. The system is moving west-northwestward at speed of 12 knots. Maximum sustained winds are at 130 knots (240 km/h) with gusts up to 160 knots (296 km/h). Winds between 114 – 135 knots are classified as Category 4 typhoon and winds above 135 knots as Category 5 or supertyphoon. JTWC reported maximum significant wave height of 40 feet (12 meters). 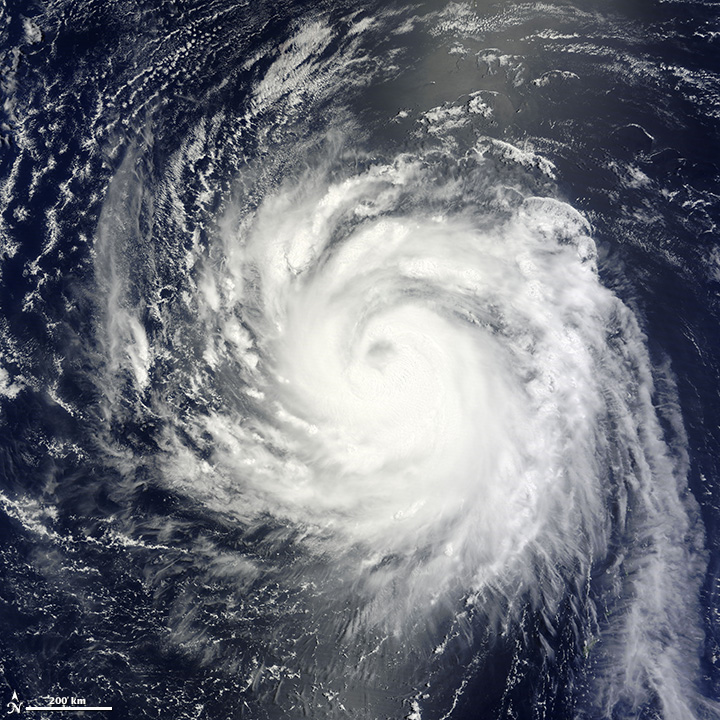 The Moderate Resolution Imaging Spectroradiometer (MODIS) on NASA’s Terra satellite acquired this image of Typhoon Soulik over the western Pacific Ocean on July 9, 2013. The storm was the equivalent of a Category 2 hurricane with sustained winds of 176 kilometers per hour (109 miles per hour), according to the Joint Typhoon Warning Center. The storm is forecast to strengthen before going ashore over China. NASA image courtesy Jeff Schmaltz, LANCE/EOSDIS MODIS Rapid Response Team at NASA GSFC. Caption by Holli Riebeek.

Over the past 24 hours, Soulik has maintained excellent radial outflow and has rapidly consolidated from 90 knots to its current intensity of 125 knots. Recent upper-air data evidences a strong subtropical ridge extending westward over the Ryukyu Island and into the East China Sea along about 30N latitude. Soulik is tracking generally west-northwestward along the southern periphery of this east-west oriented subtropical ridge.

Under the steering influence of the deep subtropical ridge, Typhoon Soulik will continue to track westward to west-northwestward through the next 72 hours. Animated water vapor imagery as well as the upper-level analysis show a ridge extending across China into Korea and Japan. The weak shortwave trough over Mongolia is propagating slowly east-northeastward within the midlatitude westerlies and, as expected, is having negligible impact on the subtropical ridge. Soulik will continue to intensify through the next 24 hours, to a peak intensity of 130 knots, due to favorable environmental conditions. 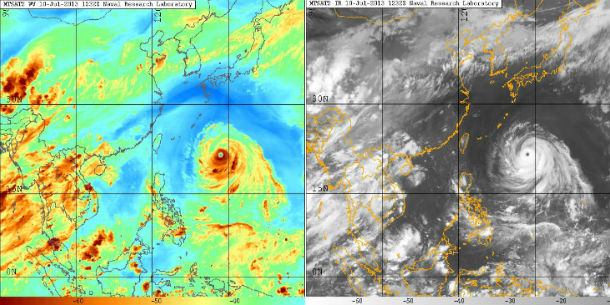 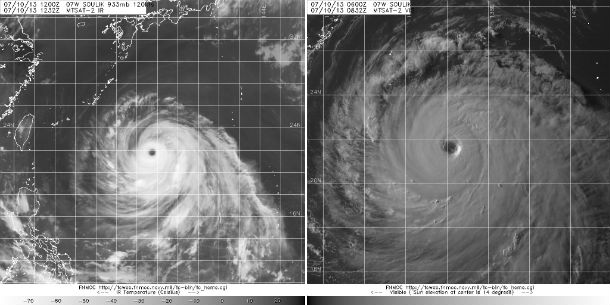 After the next 24 hours, the system will gradually weaken as it encounters increasing northerly vertical wind shear (20 to 25 knots). After the next 48 hours, Soulik will significantly weaken as it interacts with Taiwan. After the landfall, Soulik will re-curve northward along the western periphery of the subtropical ridge. The system is forecast to weaken rapidly due to frictional effects over land and increased vertical wind shear. 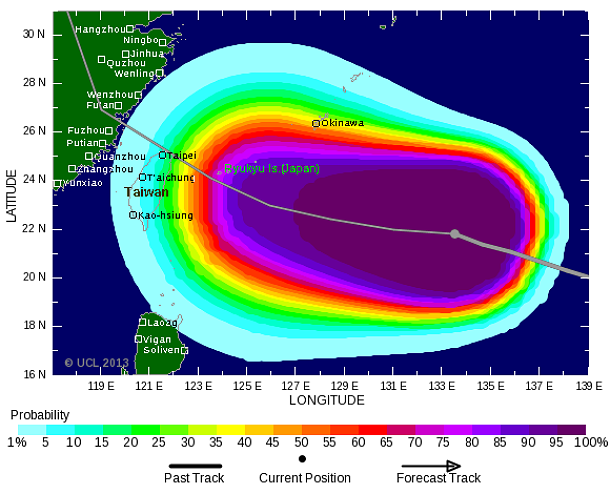 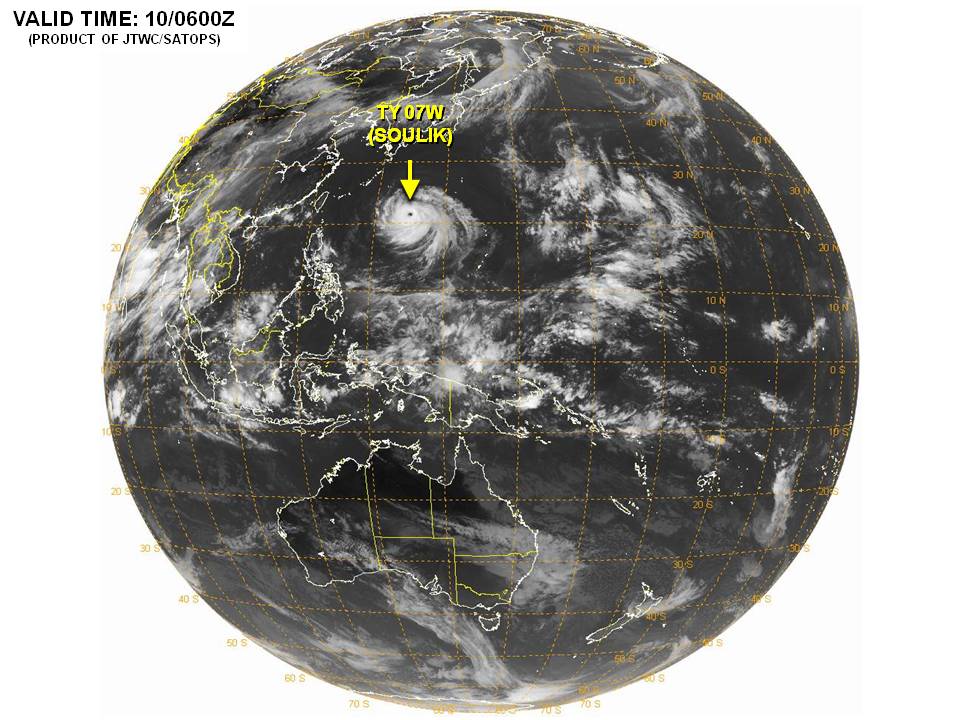