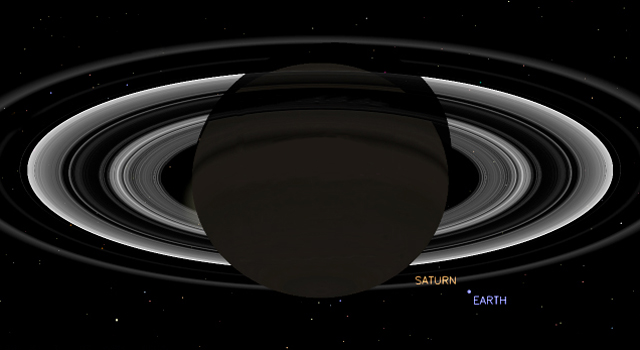 NASA`s Cassini probe will take a photo of our planet on July 19, 2013, where Earth will appear as a tiny blue dot between Saturn`s rings. Earth will be only about a pixel in size from Cassini's vantage point 1.44 billion kilometers (898 million miles) away. This photo will be part of a multi-image portrait of the Saturn system obtained by Cassini.

The spacecraft will begin acquiring the Earth part of the multi-image at 21:27 UTC and finish about 15 minutes later, at the same time Saturn is eclipsing the sun from Cassini`s perspective. The probe`s great vantage point in the shadow of Saturn will provide a unique scientific opportunity to observe its rings. At the time the image will be taken, North America and part of the Atlantic Ocean will be in sunlight.

This marvelous panoramic view was created by combining a total of 165 images taken by the Cassini wide-angle camera over nearly three hours on Sept. 15, 2006. The full mosaic consists of three rows of nine wide-angle camera footprints; only a portion of the full mosaic is shown here. Color in the view was created by digitally compositing ultraviolet, infrared and clear filter images and was then adjusted to resemble natural color. The mosaic images were acquired as the spacecraft drifted in the darkness of Saturn's shadow for about 12 hours, allowing a multitude of unique observations of the microscopic particles that compose Saturn's faint rings. Ring structures containing these tiny particles brighten substantially at high phase angles: i.e., viewing angles where the sun is almost directly behind the objects being imaged. (Credit: NASA/JPL/Space Science Institute)

Acquired image will be the first natural color view of the Saturn system with our planet. Additionally, Cassini` highest resolution camera will for the first time photograph Earth and its moon. Cassini's great positioning at the time of the photo, will make possible for it to turn its cameras towards the sun (where our planet will be), without damaging the spacecraft's sensitive detectors.

Carolyn Porco and Cassini imaging team at the Space Science Institute are in search of a time when Earth would not be obstructed by the golden planet or its rings. In cooperation with other Cassini team members, they discovered the July 19 opportunity would allow the probe to spend time in Saturn's shadow to duplicate the views from earlier in the mission to collect both visible and infrared imagery of Saturn and its ring system.

A second version of the mosaic view is presented here in which the color contrast is greatly exaggerated. In such views, imaging scientists have noticed color variations across the diffuse rings that imply active processes sort the particles in the ring according to their sizes. Looking at the ring in this view, the distribution of color across and along the ring appears to be different between the right side and the left. Scientists are not sure yet how to explain these differences, though the difference in phase angle between right and left may be part of the explanation. The phase angle is about 179 degrees on Saturn.(Credit: NASA/JPL/Space Science Institute)

Looking back towards the sun through the rings highlights the tiniest of ring particles, whose width is comparable to the thickness of hair and which are difficult to see from ground-based telescopes, pointed Matt Hedman, a Cassini science team member based at Cornell University in Ithaca, New York, and a member of the rings working group. He also said that he and his team are particularly interested in seeing the structures within Saturn's dusty E ring, which is sculpted by the activity of the geysers on the moon Enceladus, Saturn's magnetic field and even solar radiation pressure.

To learn more about the public outreach activities associated with the taking of the image, visit: http://saturn.jpl.nasa.gov/waveatsaturn .

Featured image: This simulated view from NASA's Cassini spacecraft shows the expected positions of Saturn and Earth on July 19, 2013, around the time Cassini will take Earth's picture. Cassini will be about 898 million miles (1.44 billion kilometers) away from Earth at the time. That distance is nearly 10 times the distance from the sun to Earth. (Credit: NASA/JPL-Caltech)