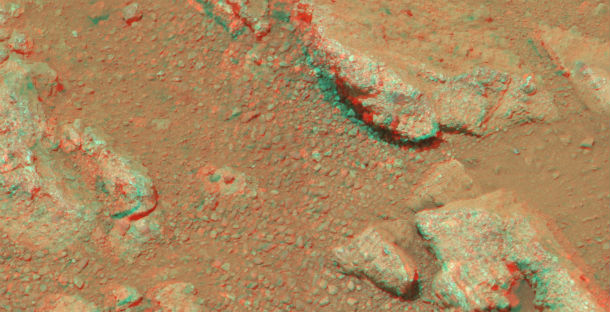 NASA experts, after detailed analysis, concluded that pebble-containing slabs that have been discovered in 2012 by Mars rover Curiosity, are part of an ancient streambed. These rocks are the first ever discovered on Mars that have streambed gravels. Scientists were able to calculate the depth and speed of the water that once flowed at this location, by looking at different shapes and sizes of these gravels – which vary from the size of sand to the size of golf balls.

The team of experts completed more rigorous quantification of the outcrops to characterize the size distribution and roundness of the pebbles and sand that make up these conglomerates, stated Rebecca Williams of the Planetary Science Institute, Tucson, Arizona. They ended up with a calculation in the same range as their initial estimate last fall, which was that at a minimum, the stream was flowing at a speed equivalent to a walking pace (a meter, or three feet, per second) and it was ankle-deep to hip-deep, added Williams – also a lead author of a report on this subject in the journal Science. 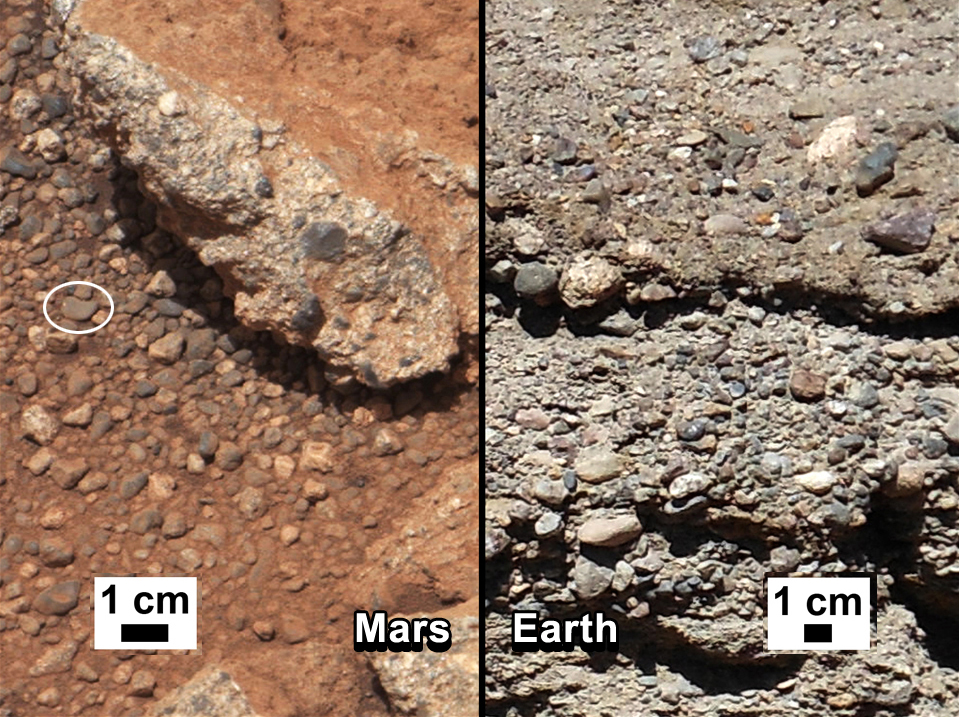 This set of images compares the Link outcrop of rocks on Mars (left) with similar rocks seen on Earth (right). (Credit: NASA/JPL-Caltech/MSSS and PSI)

There were three pavement-like rocks investigated using the telephoto capability of Curiosity's Mast Camera (Mastcam) through the rover's first 40 days on Mars that are the basis for the recent report. The first rock called "Goulburn" is located near the rover's "Bradbury Landing" touchdown site. The other two, "Link" and "Hottah", are approximately 50 and 100 meters to the southeast. Scientists also employed the rover's laser-shooting Chemistry and Camera (ChemCam) instrument to examine the Link rock.

Williams said that these conglomerates look amazingly like streambed deposits on Earth.Most people are familiar with rounded river pebbles, and maybe you've picked up a smoothed, round rock to skip across the water, she continued and added that seeing something so familiar on another world is exciting and also gratifying.

The bigger pebbles are not spread evenly in the conglomerate rocks.Scientists found alternating pebble-rich layers and sand layers in Hottah. This is frequent in streambed deposits on Earth and provides additional proof that there were indeed stream flow on Mars. Additionally, lot of the pebbles are touching each other, witch is a sign that they rolled along the bed of a stream. 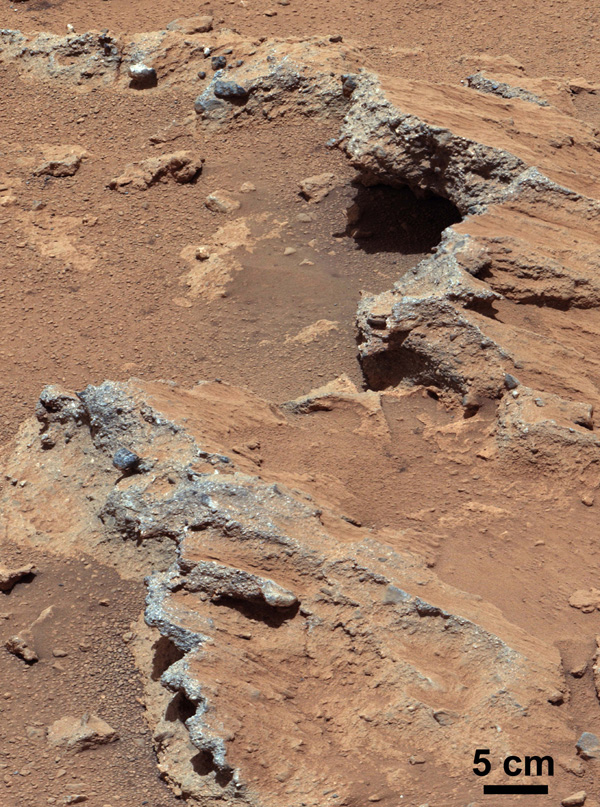 NASA's Curiosity rover found evidence for an ancient, flowing stream on Mars at a few sites, including the rock outcrop pictured here, which the science team has named "Hottah" after Hottah Lake in Canada's Northwest Territories. It may look like a broken sidewalk, but this geological feature on Mars is actually exposed bedrock made up of smaller fragments cemented together, or what geologists call a sedimentary conglomerate. Scientists theorize that the bedrock was disrupted in the past, giving it the tilted angle, most likely via impacts from meteorites. (Credit: NASA/JPL-Caltech/MSSS)

Sanjeev Gupta of Imperial College, London, and a co-author of the new report, stated that their analysis of the amount of rounding of the pebbles provided further information. The rounding indicates sustained flow, as it occurs as pebbles hit each other multiple times.This wasn't a one-off flow rather it was sustained, certainly more than weeks or months, though we can't say exactly how long, he explained.

The estimation of the scientists is that the stream carried the gravels at least a few kilometers.

Although the Red Planet has large amounts of water ice, todays Mars has a too thin atmosphere to make a sustained stream flow of water possible.There are some evidences indicating that ancient Mars had various environments including liquid water. Interestingly none but these rocks found by Curiosity could provide the type of stream flow information published in this report. Curiosity's photos of conglomerate rocks suggest that atmospheric conditions at Gale Crater at one time made the flow of liquid water on the Red Planet`s surface possible.

Throughout a two-year prime mission, experts with the help of Curiosity's 10 science instruments are evaluating the environmental history in Gale Crater on Mars, the place where the rover has found proof of ancient environmental conditions favorable for microbial life.