Well, if you ask the question from the title, most people who are even remotely interested in astronomy and comets will most likely answer – NO – Comet ISON ( Comet C/2012 S1) is not an ordinary comet! In fact, it is a very interesting comet with plenty of potential for both experts and millions of stargazers around the globe.

As of May 2, Comet ISON was approximately 3.885 AU from the Sun, which is about 581 million kilometers (361 million miles) distant from the Sun. Ernesto Guido and Nick Howes of the Remanzacco Observatory used the 2-meter Ritchey-Chretien Liverpool Telescope to identify almost the same tail structure which was seen in the Hubble Space Telescope images of this comet from April 10, 2013. Their initial approximation of the tail length is around 28 arcseconds, which is bigger than some recent reports from smaller telescopes. 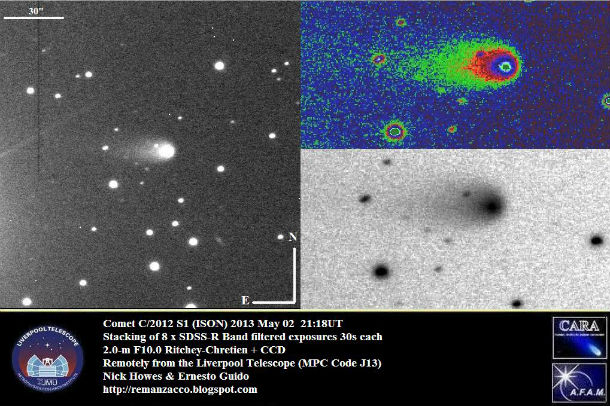 Many interesting things might happen by the passing of the comet, as it makes its closest approach to Earth in late December, 2013, but then again it might totally disappoint – which would also be very interesting.

When it was discovered in September, 2012 by Russians Vitali Nevski and Artyom Novichonok, it was farther than Jupiter and incredibly faint, but was also very actively spewing large amounts of dust from its nucleus. Soon after astronomers determined its orbit, Comet ISON started to gain amazing publicity and it didn’t take long before it was named “The comet of the century”.

One special thing about ISON is that it belongs to a group of comets known as sungazers. Scientists soon acknowledged the comet would pass just 1.1 million miles from center of the Sun (680,000 miles above its surface) on November 28, 2013.

So as the comet makes a hairpin turn around the Sun on that date, the ice in it will probably vaporize frantically in the intense solar heat. Considering it survives its close encounter with the Sun, ISON is expected to become a very bright object possibly ten times brighter than Venus, or maybe even brighter. However, that would only manifest for a short period of time around its closest approach to the Sun.

That is reason enough to be excited about ISON, and not call it ordinary, but for some people that just won’t do. Today, internet is flooded with people producing and promoting their own ideas as to why we should pay close attention to this comet. 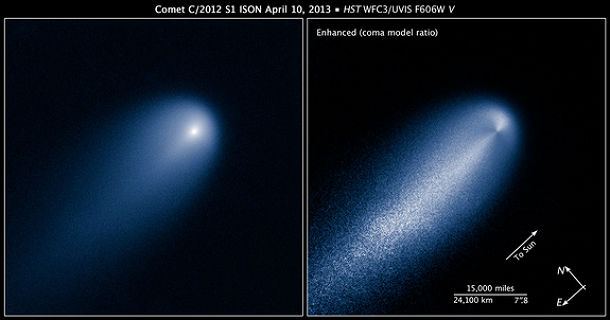 These images of Comet ISON were taken by NASA’s Hubble Space Telescope on April 10, 2013, when the comet was 386 million miles from the sun. The image at right has been computer-processed to reveal the structure of ISON’s inner coma. (Credit: NASA, ESA, and Z. Levay/STScI)

Some people very boldly claim that ISON might appear as bright as the Sun, and while the comet has the potential to reach the magnitude of -13 (equal as the full Moon), it would really be unprecedented if it would reach even close to magnitude of -26.74 as the Sun shines.

Also there is fear and anxiety caused by the dust of tiny meteors that ISON will most likely shower Earthwith as it passes by, as many speculate about the properties of that space-dust.

One pretty popular idea circulating the internet is that Comet ISON, or parts from it, might actually impact planet Earth with rather grave consequences – associating the comet with Nibiru, “the tenth planet” destined to destroy Earth. There’s always some story about Nibiru.

Another popular view is that ISON has “companions” following it that have been spotted in an image of the comet. According to experts, some images circulating the web are nothing less than the hot pixels in the camera.

And finally (or rather not finally, cause there are many more theories floating around), there is an idea that Comet C/2012 S1 might influence our planet, by causing earthquakes and other elemental disasters around the globe.

Comets as harbingers of disasters

Comet hype is nothing new as throughout the human history people have been associating the passing of a brilliant comet with a sign or an omen, usually of an ill kind. 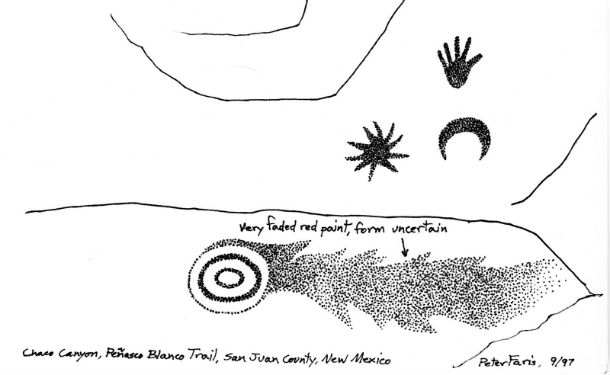 So we had the comet of 79 that was blamed for the eruption of Vesuvius that resulted in destruction of the cities of Pompeii and Herculaneum. Also, Halley’s Comet of 1066 was visible in the sky for two months while the English and Normans were preparing an invasion. Additionally, an outbreak of the Black Plague in London, that killed 90 thousand people, was associated with a comet seen in 1665.

In recent history there has been a tragic ending to the hysteria surrounding Comet Hale-Bopp. The mass suicide of the Heaven’s Gate cult in 1997 was sparked by the theory that a spacecraft had been seen following Comet Hale-Bopp promoted on the late night “Coast to Coast with Art Bell” radio show.

As ISON approaches the excitement is definitely rising, as some people are hoping for an amazing show this“Comet of the century”  might put on, while others believe something bad is going to occur.

You can browse the internet and figure out for yourself how much truth there is in all these theories and predictions about Comet ISON, but one thing is for sure – something amazing will happen late this year.Because even if the comet just fizzles when it reaches the Sun, with all the hype surrounding it, that would also be rather amazing.