There are about 400 people living within. GDACS reported that this earthquake can have a low humanitarian impact based on the magnitude and the affected population and their vulnerability.

The Kuril-Kamchatka arc has frequent moderate-to-large earthquakes, and has hosted over three-dozen M 6.5+ events within 250 km of the today's earthquake over the past 40 years. It is considered one of the most seismically active regions in the world.

The hypocenter or focal depth occurred in hot solid mantle of Earth. Earthquake was felt as far as Tokyo, 1500 km away from the epicenter. (ER)

At 03:15 UTC a magnitude 5.7 aftershock was recorded at the same area and with approximately same depth of 120 km, USGS reported. 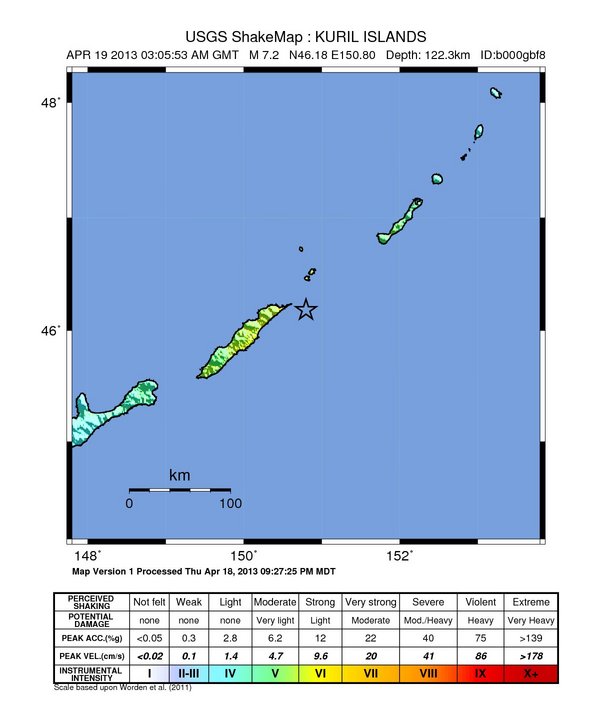 The April 19, 2013 M 7.2 earthquake ENE of Kuril’sk, Russia, occurred as a result of oblique normal faulting at intermediate depths within the subducting lithosphere of the Pacific plate. At the latitude of this earthquake, the Pacific plate converges with the North America plate (and the smaller Okhotsk microplate) towards the west-northwest at a velocity of approximately 82 mm/yr, and subducts beneath the Kuril Islands at the Kuril-Kamchatka trench, some 160 km to the southeast of the April 19 event. The depth of this earthquake, and its oblique-faulting mechanism, indicate that it involved intraplate faulting within the subducting slab, rather than being an interplate thrust event on the shallower seismogenic zone between the two tectonic plates.

The Kuril-Kamchatka arc has frequent moderate-to-large earthquakes, and has hosted over three-dozen M 6.5+ events within 250 km of the April 19 earthquake over the past 40 years. None are known to have caused shaking-related fatalities. The largest of these was the November 2006 M 8.3 interplate thrust event, approximately 200 km to the east of the April 19 earthquake. However, while the Pacific slab is seismically active in this region to depths of almost 700 km, just one of these nearby M 6.5+ events has occurred at depths greater than 70 km – a M 6.7 event in October 1994, 130 km to the southwest.

Intermediate depth (70 – 300km) and deep-focus (depth > 300 km) earthquakes are distinguished from shallow earthquakes (depth < 70 km) by the nature of their tectonic setting, and are in general much less hazardous than their shallow counterparts, though they may be felt at great distances from their epicenters.