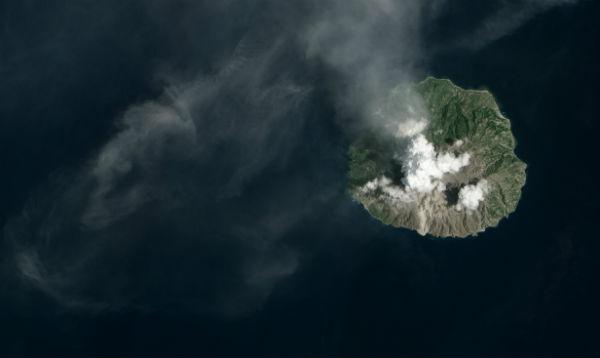 The number of small tremors and emissions of ash at Paluweh (also known as Rokatenda) volcano increased in October 2012, and continued into February 2013, probably indicating growth of the lava dome. After months of rumbling, an explosive eruption occurred on February 2 and 3, 2013. Satellite images show the path of a volcanic landslide, likely the remnants of a pyroclastic flow. A brand-new delta extends into the Flores Sea at the foot of the flow. Gray ash from the eruption covers the southern slopes of the peak. According to the Darwin Volcanic Ash Advisory Center (VAAC), Paluweh has experience minor ash and gas emissions almost daily since the initial blast on February 2/3, 2013. 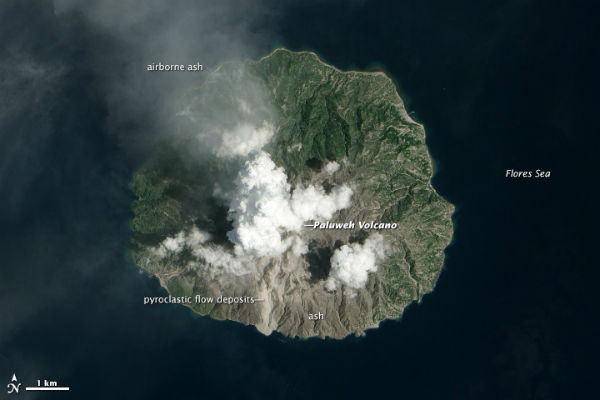 Partial dome collapse or explosions at the lava dome ( or both)  produced new ash emissions on February 11, 2013. VAAC Darwin reported ash plume rising up to 2.1 km (7,000 feet). According to the Darwin Volcanic Ash Advisory Center (VAAC), Paluweh has experience minor ash and gas emissions almost daily since the initial blast on February 2/3, 2013. 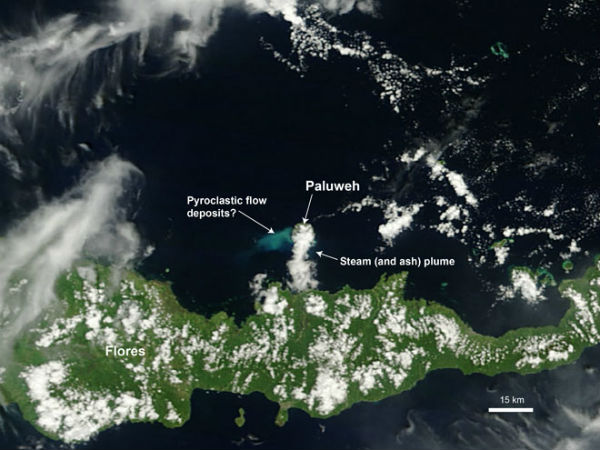 Paluweh volcano is located on Palu’e (Paluweh) Island. About 10,000 residents of the island were evacuated earlier last year after the volcano showed signs of unrest. Now, dozens of homilies situated in Waturia village, East Nusa Tenggara, are in dire need of food, clean water and medical supplies following the outbreak of diseases at the site, such as malaria, acute respiratory infections (ISPA) and famine, according to Jakarta Post. The ash has reportedly caused respiratory diseases among children. As many as 722 people sought refuge in Waturia village while more than 600 others were sheltered in Nangahure and Wairumbia villages following  the eruption of Mount Rokatenda on Palue Island, NTT, on February 2/3, 2013. Ash destroyed most of plants and crops so evacuated islanders are now facing serious food shortage. Sikka Deputy Regent Damianus Wera said that he would immediately coordinate with related offices to monitor conditions in the affected area and consider the possibility of giving seedlings to local residents so they could plant crops during the current rainy season. 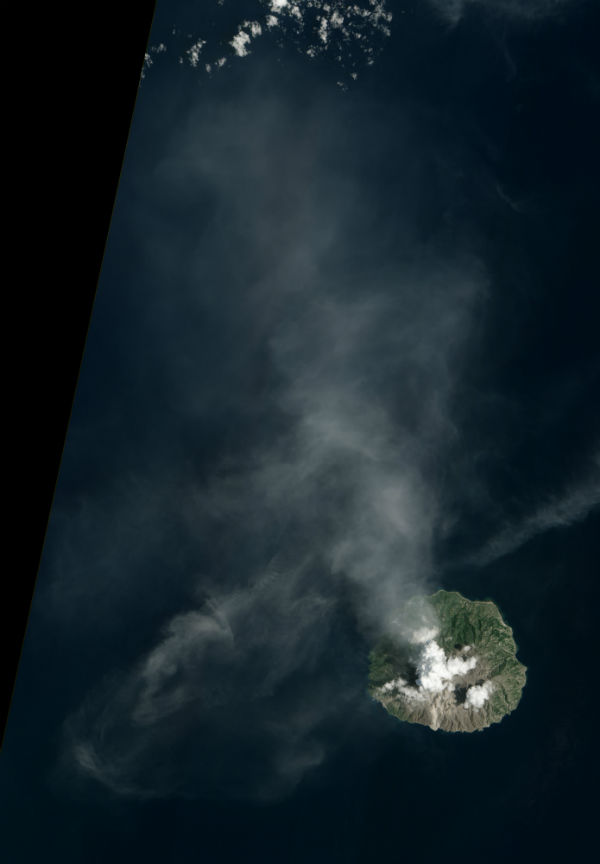 Paluweh volcano, also known as Rokatenda, forms the 8-km-wide island of Paluweh north of the volcanic arc that cuts across Flores Island. Although the volcano rises about 3000 m above the sea floor, its summit reaches only 875 m above sea level. The broad irregular summit region contains overlapping craters up to 900 m wide and several lava domes. Several flank vents occur along a NW-trending fissure. The largest historical eruption of Paluweh occurred in 1928, when a strong explosive eruption (VEI 3) was accompanied by landslide-induced tsunamis and lava dome emplacement, ending up causing almost 100 fatalities.