Scientists warned that Auckland is vulnerable to volcanic eruptions. During the last 250,000 years, Auckland's volcanoes have totally changed the Auckland landscape. The scientists used a variety of devices and models to explore in a new way the lava flows of AVF and its 50 monogenetic volcanoes. Polygenetic volcanoes erupt from the same craters regularly. Scientists point that detailed evaluation of lava flow hazards and delimitation of potentially safe places from lava flow inundation have not yet been attempted, in spite of the relatively high level of their potential risk.

Future vent forming eruptions will very likely occur within the city limits or its outskirts, allowing few mitigation or preparation options. Scientists agreed that residents of Auckland may get only a day or two warning of a volcanic eruption and will only know hours before where it will explode on the surface.

Much of Auckland is built on the Auckland Volcanic Field (AVF), which contains at least 50 volcanoes that cover 360km2. The field is still active and there is no way to predict where or when the next ‘bubble’ of magma will rise to the surface and create a new volcano. The size and length of each eruption depends on how big the ‘bubble’ of magma was. Auckland has already experienced volcanic ash falls from Mount Taranaki/Egmont, Taupo, Okataina, Tongariro and Mayor Island. The earliest volcanic eruption in the AVF was an estimated 250,000 years ago. The last occurred about 600 years ago and formed Rangitoto and Māori living on Motutapu Island witnessed it. 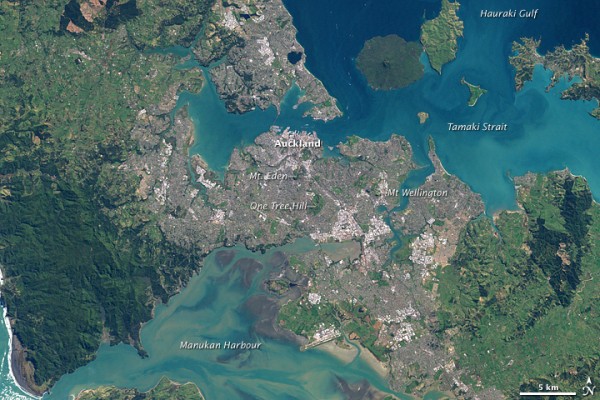 The Auckland Volcanic Field (AVF) lies at the southern end of the Northland Peninsula and is overlain by New Zealand's largest city. It covers 360km2 and contains at least 50 volcanoes that have formed over the last 250.000 years. Auckland’s volcanoes vary in shape, size and character and  it lies in an elliptical volcanic field 29 km long in its largest (N-S) direction.

When the basalt magma mixes with seawater or groundwater, super heated steam blows it apart, causing large explosions. An eruption of this type is more likely to recur in Auckland. These eruptions can form large craters, which can subsequently fill with water such as Lake Pupuke, Orakei Basin and Onepoto Reserve. Over half of the eruptions in Auckland have produced lava flows or lakes. 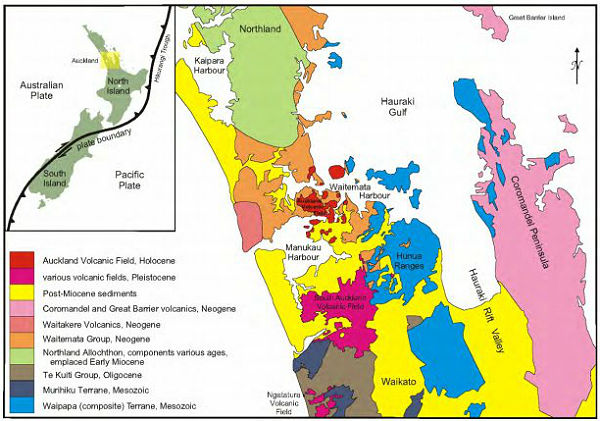 Continued eruptions often create volcanic or scoria cones such as Mt Wellington, Mount Eden, Browns Island and Three Kings. The majority of previous scoria cones and lava flows are located in the heart of the city, upon a presently slightly elevated ridge-system. As the volcano continues to erupt it may produce extensive lava flows. Many have been mapped within the city, extending up to 10km from the source. Likely hazards and effects of the next Auckland eruption depend on what type of eruption occurs and for how long.

On average, the Auckland isthmus has been impacted by ash-fall from local or distant eruptions once every 400 years for the past 80,000 years. 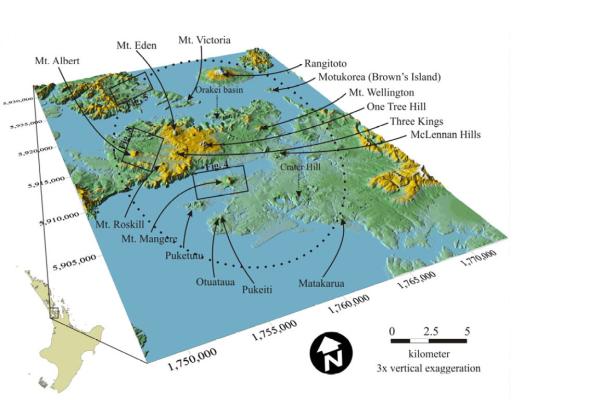 Rangitoto is a volcanic island in the Hauraki Gulf visible from most parts of Auckland City. It is the most recent, largest and least altered volcano in the Auckland Volcanic Field. Rangitoto makes up nearly 60% of the total volume of material erupted. It was formed by at least 2 eruptions 600-700 years ago and is now about 260 m above sea level and 5.5 km wide.

It is an intra-plate or hot spot volcano (these occur away from plate boundaries and are not related to subduction). A mantle hot spot exists about 100 km below Auckland. When rock is melted by this extra heat, it will separate from the surrounding solid rock and rise to the surface. The melted rock is basalt magma which has a low viscosity (flows easily) and may rise to the surface at speeds of up to 5 km/hour. 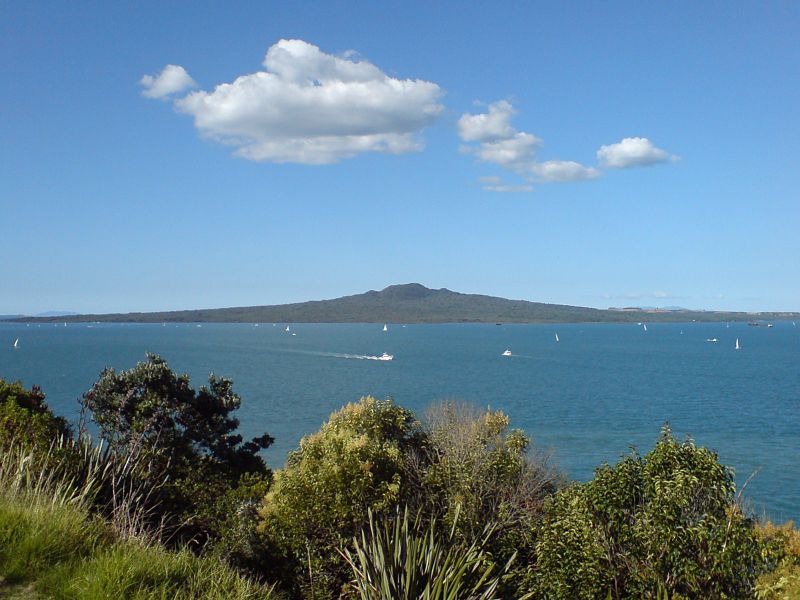 While most volcanic cones in the Auckland Volcanic Field have been affected by quarrying, many of the remaining cones are now within parks, and retain a more natural character than the surrounding city. Prehistoric earthworks and historic fortifications are in several of these parks, including Mount Eden, North Head and One Tree Hill (Maungakiekie).

It remains unknown when and where future eruptions will occur. Based on the number and frequency of past eruptions it is estimated there is about a 1 in 1000 (0.001 per cent) chance an eruption could occur in any one year. There is an 8%probability (1 in 12.5 chance) an eruption will occur in the AVF field over any 80 year period. The 1.4 million people are living on the Auckland Volcanic Field (AVF) area.

Some of the possible resulting hazards are base surge, ash and debris, fire fountains, explosion shockwaves, poisonous gases. earthquakes and tsunami.

Base surges are a hot blast of rock, gas and steam that travels across the land at hundreds of kilometres an hour. These surges flow outward from the vent and may significantly devastate an area up to 3km from the eruption location. For the duration of the eruption, ash and debris will accumulate down wind of the volcano. The depth of ash and debris deposited will decrease further from the vent. Fire fountaining, molten rock and magma erupting from the volcano’s vent, can lead to the formation of lava flows that will be slow-moving and destroy most things in their path. Auckland has at least 14 large lava tube caves which run from the volcanoes down towards the sea.

South Auckland will probably suffer more damage from lava flows than the early stages of the eruption. The lava flows in central Auckland were likely to be longer in length as the topography forces lava into river-like channels.

Shockwaves from violent explosions will be stronger closer to the vent and can flatten trees and break windows. As rising magma moves upwards through the earth’s surface, it can generate earthquakes. Earthquake activity is likely to increase as an eruption becomes more likely and will continue for the duration of the eruption. There are currently 9 seismographs operated by GNS Science’s GeoNet programme that monitor Auckland volcanoes. Volcanic eruptions occurring beneath the ocean or large water bodies can also displace water creating a tsunami.

Impacts could include devastation of buildings and infrastructure within a 3km radius of the volcanic vent or in the direct path of lava flow, large economic losses due to clean-up costs, physical damage to buildings and infrastructure, closure of businesses, damage to horticultural and agricultural products and a decline in the region’s tourism, an increased risk of widespread fires from hot ash or disrupted gas supply lines, significant impacts on Auckland’s infrastructure from any of the listed hazards which may result in mass evacuations, disruption and restrictions to lifeline networks such as electricity, gas and water supplies, and waste and stormwater networks from any of the listed hazards, ash and dust will affect air-conditioning systems and some communication networks, roading networks within a 10km radius of the vent may be impassable or greatly affected, rail and air services stopping or greatly reduced and eye and lung irritation and poor sanitation causing increased health risk.

The volcanism in Auckland in New Zealand differs from large, polygenetic volcanoes because future eruptions will likely take place within a densely populated city, there are no rift zones that indicate areas of elevated hazard, and the future vent area is therefore unknown, and due to the generally low-lying topography, there are few opportunities to use mitigation options, such as artificial dams.

Geonet website gives updates on all the latest volcanic activity including web cams as well as details of recent earthquakes and other hazards.