Portugal's Azores archipelago is bracing for Hurricane Gordon which had intensified to Category 2 and is forecast to hit the eastern-most islands early on Monday.  Additional weakening is forecast but Gordon is still expected to be a hurricane when it passes near or over the eastern Azores. It is expected to weaken to Category 1 before it passes close to Santa Maria and Sao Miguel islands. Category 1 hurricanes have enough strength to uproot trees, blow off poorly attached roof tiles, cause coastal flooding and power outages. 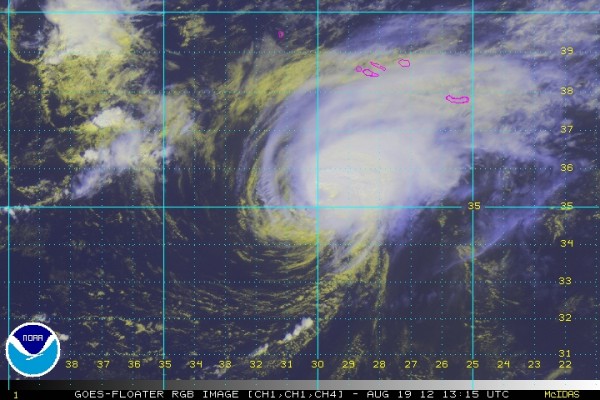 At 12:00 UTC, the center of Hurricane Gordon was located near latitude 35.1N and longitude 30.7W. Gordon is moving eastward at speed of 37 km/h (23 mph). A turn toward the east-northeast is expected later today. Gordon is expected to be near or over the islands of the eastern Azores early Monday.

The Azores are a group of islands in the middle of the Atlantic Ocean (about 2 hours flying from Portugal). The last hurricane to have reached the Azores, in 2006, was Category 1 and also named Gordon. It caused little damage.