An intense earthquake swarm is shaking the Manadas volcanic fissure system in the NW part of the Sao Jorge Island (population 8 200), Azores, Portugal. The last eruption of this volcano took place in 1808.

According to the Center for Seismovolcanic Information and Surveillance of the Azores (CIVISA), the swarm started at 16:05 LT (15:05 UTC) on March 19. Three earthquakes were registered over the next 2 minutes, with magnitudes ranging from 2.8 to 2.9.

Over the next 24 hours, more than 700 earthquakes were recorded in the region. All had low magnitudes and only 48 were felt, CIVISA said.

Head of CIVISA, Rui Marques, said that Manadas volcanic fissure system, which coincides with the main volcanic cones on the island, is still active and now registers a release of energy that was not common in recent years.2

“All the earthquakes felt in São Jorge since Saturday are of tectonic origin,” Marques said, adding that the largest earthquake was M3.2 at 01:43 UTC on March 20. The quake was felt by the populations of São Jorge and the island of Pico.

“We are still evaluating the behavioral pattern of this seismic crisis, which is now in a phase of lower energy release,” Marques said. The seismic events are now progressing toward the village of Velas. 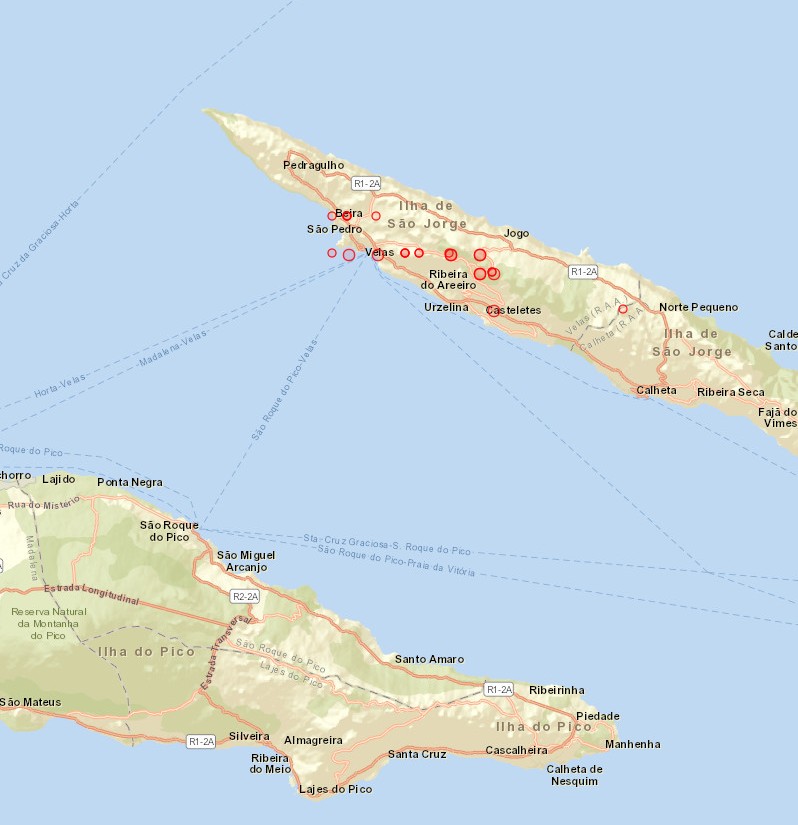 “The current seismic swarm makes many remember the earthquake swarms that preceded the 2021 eruption on La Palma in the neighboring Canary Islands,” said Dr. Tom Pfeiffer of the VolcanoDiscovery.3

The linear São Jorge Island is 54 km (33 miles) long and only 6 km (3.7 miles) wide. It was formed by fissure eruptions beginning in the eastern part of the island.

Lava effused from three locations above the south-central coast during 1580, producing flows that reached the ocean.

In 1808 a series of explosions took place from vents along the south-central crest of the island; one of the vents produced a lava flow that reached the southern coast.

Submarine eruptions were reported on several occasions from vents off the S and SW coasts. This volcano is located within the Azores, a UNESCO Global Geopark property.4