Seismic activity at Manadas volcanic fissure system in the NW part of São Jorge Island, Azores, Portugal continues at a high level for the fourth day in a row. The Civil Protection of Azores is preparing preventive measures in case of a strong earthquake or an eruption. The last eruption of this volcano took place in 1808 (VEI 1).

According to the Center for Seismovolcanic Information and Surveillance of the Azores (CIVISA), the swarm started at 16:05 LT (15:05 UTC) on March 19 with three earthquakes (M2.8 – 2.9) registered over the next 2 minutes.

To date, more than 18 000 earthquakes have been detected, of which at least 94 were felt by the population.

On March 22, the Azores Regional Civil Protection and Fire Service (SRPCBA) informed that it is preparing preventive measures that can be adopted in a possible scenario of a greater magnitude earthquake or a possible eruption.1

The measures are being designed in conjunction with the municipalities, civil protection agents, and other entities responsible for this area.

A technician from the SRPCBA is already on the island of São Jorge to meet with the municipalities and provide support, SRPCBA said, adding that the dispatch of support equipment is being implemented to reinforce the island’s response capacity in case of need.

CIVISA said all earthquakes detected on the island so far are of tectonic origin.

However, due to the fact that earthquakes are located in the volcanic fissure system, this is considered a seismovolcanic crisis and all scenarios must be considered, including a stronger earthquake and possible eruption.

Authorities are urging residents to keep calm, follow official information and recommendations disseminated by the authorities. 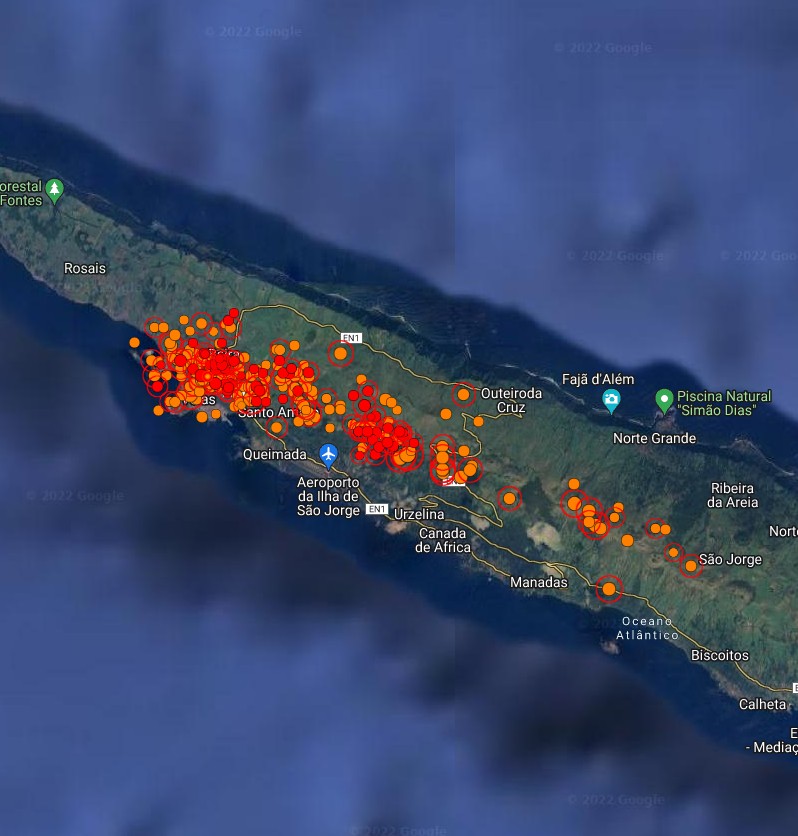 The linear São Jorge Island is 54 km (33 miles) long and only 6 km (3.7 miles) wide. It was formed by fissure eruptions beginning in the eastern part of the island.

Lava effused from three locations above the south-central coast during 1580, producing flows that reached the ocean.

In 1808 a series of explosions took place from vents along the south-central crest of the island; one of the vents produced a lava flow that reached the southern coast.

Submarine eruptions were reported on several occasions from vents off the S and SW coasts. This volcano is located within the Azores, a UNESCO Global Geopark property.2