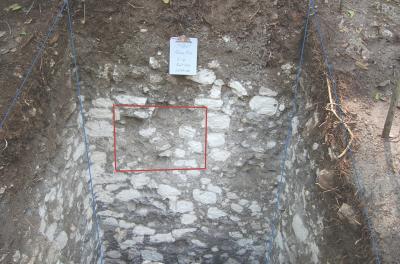 During recent excavations, sediment coring and mapping at the Mayan city of Tikal a multi-university team led by the University of Cincinnati have identified new landscaping and engineering feats, including the largest ancient dam built by the Maya of Central America.

Tikal (or Tik’al according to the modern Mayan orthography) is one of the largest archaeological sites and urban centres of the pre-Columbian Maya civilization. It is located in the archaeological region of the Petén Basin in what is now northern Guatemala. Situated in the department of El Petén, the site is part of Guatemala’s Tikal National Park and in 1979 it was declared a UNESCO World Heritage Site. 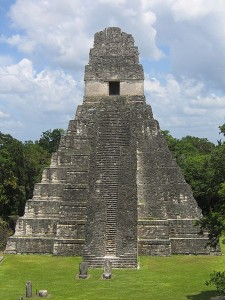 Tikal was the capital of a conquest state that became one of the most powerful kingdoms of the ancient Maya. Though monumental architecture at the site dates back as far as the 4th century BC, Tikal reached its apogee during the Classic Period, ca. 200 to 900 AD. During this time, the city dominated much of the Maya region politically, economically, and militarily, while interacting with areas throughout Mesoamerica such as the great metropolis of Teotihuacan in the distant Valley of Mexico. There is evidence that Tikal was conquered by Teotihuacan in the 4th century AD. Following the end of the Late Classic Period, no new major monuments were built at Tikal and there is evidence that elite palaces were burned. These events were coupled with a gradual population decline, culminating with the site’s abandonment by the end of the 10th century.

Tikal is the best understood of any of the large lowland Maya cities, with a long dynastic ruler list, the discovery of the tombs of many of the rulers on this list and the investigation of their monuments, temples and palaces.

New excavations brought to light the largest ancient dam built by the Maya of Central America. The dam was constructed from cut stone, rubble and earth – stretched more than 79 meters (260 feet) in length, stood about 10 meters (33 feet) high and held about 20 million gallons (about 76 million litres) of water in a man-made reservoir.

These findings on ancient Maya water and land-use systems at Tikal, located in northern Guatemala, sheds new light on how the Maya conserved and used their natural resources to support a populous, highly complex society for over 1,500 years despite environmental challenges, including periodic drought.

According to Vernon Scarborough, UC professor of anthropology, “The overall goal of the UC research is to better understand how the ancient Maya supported a population at Tikal of perhaps 60,000 to 80,000 inhabitants and an estimated population of five million in the overall Maya lowlands by AD 700.”

He added, “That is a much higher number than is supported by the current environment. So, they managed to sustain a populous, highly complex society for well over 1,500 years in a tropical ecology. Their resource needs were great, but they used only stone-age tools and technology to develop a sophisticated, long-lasting management system in order to thrive.”

This gravity dam presents the largest hydraulic architectural feature known in the Maya area. In terms of greater Mesoamerica, it is second in size only to the huge Purron Dam built in Mexico’s Tehuacan Valley sometime between AD 250-400. 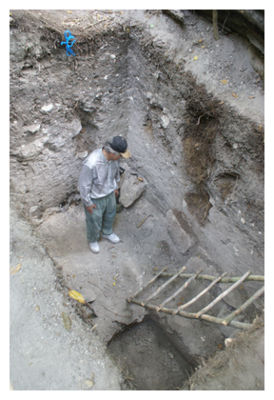 Water collection and storage were critical in the environment where rainfall is seasonal and extended droughts not uncommon. And so, the Maya carefully integrated the built environment – expansive plazas, roadways, buildings and canals – into a water-collection and management system.

Scarborough and his colleagues have been excavating the reservoirs, canals and sluices that once directed water from the crest of the hilly city of Tikal to the residents below. The story they’ve uncovered is one of gradual technological advances.

People first moved into Tikal around 500 B.C. These early colonists depended on natural springs for their water needs. As the population grew, this water wasn’t enough. So Tikal residents excavated out natural arroyos, or gulches, and paved them to prevent the ground from absorbing precious rainwater. They then transformed into reservoirs the quarries from where they’d pulled stones for their temples and homes.

“Everything at Tikal was covered with plaster,” Scarborough said. “When it rained, the water would flow through to these great big quarry scars.”

These reservoirs could hold thousands of gallons of rainwater, the archeologists found. One of the largest, the Palace Reservoir, held up to 19,715,424 U.S. gallons (74,631 cubic meters).

“These filtration beds consisted of quartz sand, which is not naturally found in the greater Tikal area. The Maya of Tikal traveled at least 20 miles (about 30 kilometers) to obtain the quartz sand to create their water filters. It was a fairly laborious transportation effort. That speaks to the value they placed on water and water management,” said Nicholas Dunning, UC professor of geography.

What can we learn from Mayans?

UC paleoethnobotanist David Lentz explained that the sophisticated water management practiced by the ancient Maya impacted the availability of food, fuel, medicinal plants and other necessities. He said, “Water management by the Maya included irrigation, which directly impacted how many people could be fed and overall population growth. Accordingly, it is essential to understand the array of canals and reservoirs at Tikal, which conserved water during the annual dry season and controlled floodwaters during the rainy months.

These practices allowed the Tikal Maya to sustain relatively high population densities for several centuries. As it evolved, this system of reservoirs was largely dependent on rainfall for recharging. With the onset of the 9th century droughts however, water supplies dwindled, causing the resource base and social fabric of the Tikal Maya to come under considerable stress. These developments may well have contributed to the abandonment of the city.” Of significance to Scarborough and the entire team are the potential lessons that can be gleaned from identifying a water system like that at ancient Tikal.

Scarborough added, “Water management in the ancient context can be dismissed as less relevant to our current water crisis because of its lack of technological sophistication. Nevertheless, in many areas of the world today, the energy requirements for even simple pumping and filtering devices – to say nothing about replacement-part acquisition – challenges access to potable sources. Tropical settings can be especially difficult regions because of high infectious disease loads borne by unfiltered water schemes. The ancient Maya, however, developed a clever rainwater catchment and delivery system based on elevated, seasonally charged reservoirs positioned in immediate proximity to the grand pavements and pyramidal architecture of their urban cores. Allocation and portability were developmental concerns from the outset of colonization. Perhaps the past can fundamentally inform the present, if we, too, can be clever.”

Featured image: Excavation of the dam identified by the UC-led team. A collapsed sluice gate is outlined in red. Credit: University of Cincinnati researchers