Are we facing an end of Antarctic as we know it?

Regional warming, over-fishing, pollution, invasive species creeping into the area, ocean acidification and loss of sea ice around South Pole region are the most immediate threats for waters around Antarctic. And all those threats are linked to global levels of carbon dioxide. Transformation of area is happening rapidly. Concerns have been raised about increased stress on Antarctic systems from global environmental change and growing interest in the region's resources. This concerns might escalate quickly, judging from recent rapid environmental change in parts of Antarctica and increasing human interest in the region .

Retreat of sea ice cover, which is crucial for fauna on and around icy continent, has already been reduced by warming. As the planet warms and the massive ice sheets break apart and melt, sea levels could continue to rise dramatically. 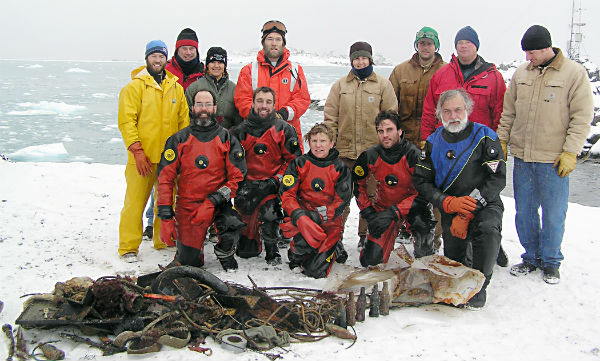 Tourism, sea hunt, research facilities and other, threaten to change Antarctic and its pristine environment. One of the longer-term concerns that could very well be the greatest threat to Antarctica is the potential for potential for oil, gas and mineral exploitation on the continent and in the surrounding ocean.

The polar regions are the most sensitive regions on Earth to global warming, responding rapidly, so what happens in Antarctica in response to this warming affects the entire Earth system in many ways that we barely understand. Antarctica contains over 90 percent of the fresh water in the world, locked up as solid water in its massive ice sheets. Research that develops fundamental knowledge and understanding of these complex systems conducted in and from Antarctica is critical to understanding many of the challenges facing Earth today according to Mahlon “Chuck” Kennicutt II, professor of oceanography at  Texas A&M University.

The continent is governed by the Antarctic Treaty System  since it was established in 1962 and 50 countries currently adhere to the treaty. Antarctic Treaty is a series of international agreements that regulates research and tourism. So far the treaty has done a good job of conserving Antarctica's environment and resources but changes are happening so fast that they need extra attention. The treaty is under pressure from global climate changes and the always increasing interest of companies looking to the regions natural resources, from fish to krill to oil to gas to minerals. 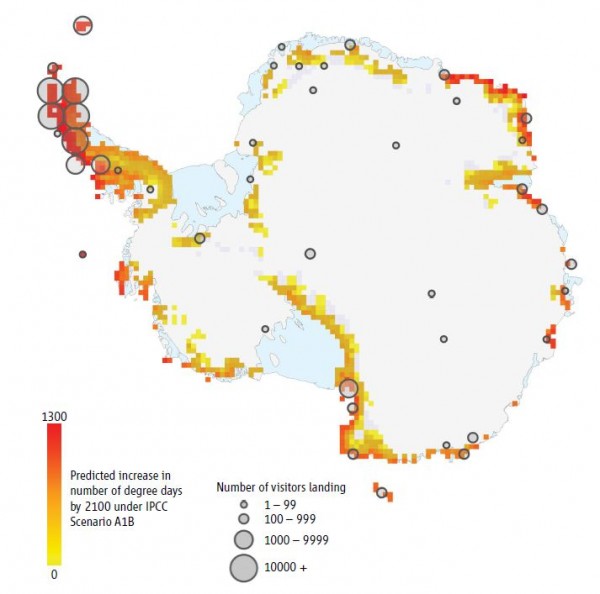 The Southern Ocean is one of the world’s major sinks of global atmospheric CO2. In recent decades, however, it has become less effective in absorbing global CO2 because the increasing westerly winds have caused an upwelling of CO2 rich water from other areas, minimizing its capability to absorb additional CO2. In addition, waters of the Antarctic Circumpolar Current have warmed around 0.2°C per decade, which is more than the global ocean average. It is not yet clear what effect that has on open ocean ecosystems.

The Southern Ocean’s change in chemical composition and temperature has implications for the marine ecosystem. The acidification of the ocean (caused by the absorption of global CO2) is expected to have a significant effect on ecologically key species and this will have cascading consequences through the ecosystem. Equally, if seawater temperatures continue to rise, some endemic species may be able to adapt, but others may become extinct if their physiological and ecological limits are exceeded. Then the marine ecosystem would be more susceptible to competition from nonnative species. 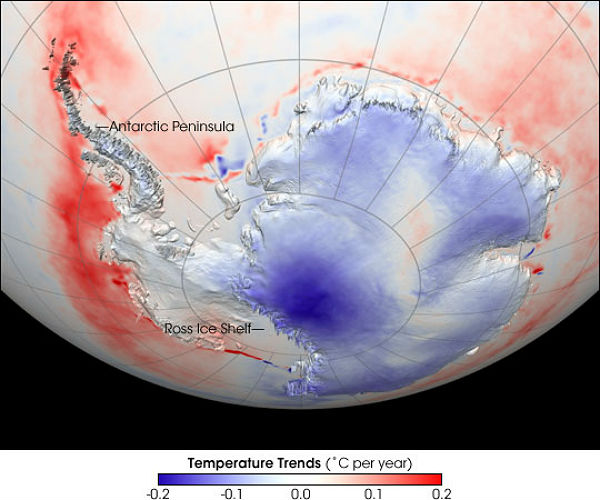 The Antarctic Peninsula is changing particularly quickly. The area is experiencing the fastest winter warming of any place on Earth. 87% of the peninsula's land-bound glaciers are in retreat, according to research by US Palmer's  station which is run on peninsula. However, the Antarctic Peninsula also represents only about 4% of the whole continent, the other 96% appears to have had a stable temperature over the last 40 years to the extent where the most remarkable aspect is the stability compared to other parts of the world.

Small rises in temperature that start to nibble away a little faster at the edges could eventually speed up the loss of ice and cause greater temperature rises to take place further inland. 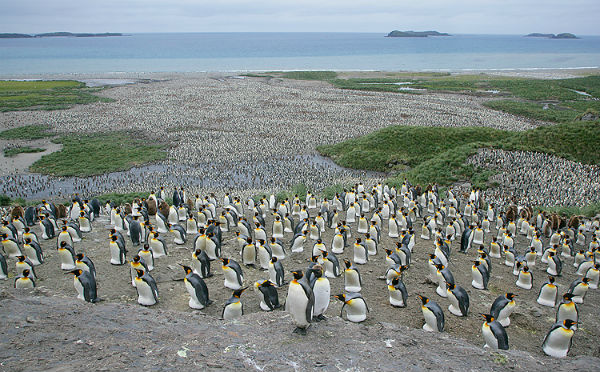 Species also can be more directly affected. In some areas of the Antarctic Ocean, sea ice is absent three months longer than it was a few decades ago. Population of Adelie penguins have decreased by 80% since 1975 because of loss of sea ice.  In contrast, Gentoo and Chinstrap penguins, which prefer the ecology typical of habitats without sea ice, are thriving along the Peninsula. Krill in the area (a primary food source for Adelies) also have decreased by 80% since 1991, according to a 2011 study in the journal Proceedings of the National Academy of Sciences. Fishing boats target krill and other species, stressing vulnerable populations.

Although  Antarctica is still the most pristine environment on Earth, its marine ecosystems are being degraded through the introduction of alien species, pollution, overfishing, and a mix of other human activity. Last year nearly 20,000 tourists visited the Antarctic Peninsula, according to the International Association of Antarctica Tour Operators. There are also more researchers, and there is more exploration for minerals and other resources. 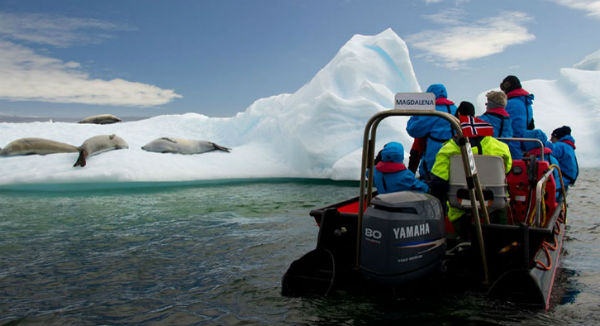 There are more scientists, more tourists, more research stations, more countries doing Antarctic research, and greater access to the continent in general, including the once-remote interior. An increase in visitors means more disturbances to the fragile ecosystem, more pollution and more opportunities to bring organisms onto the continent from elsewhere in the world. These organisms could include invasive species that significantly affect delicately balanced ecosystems.

The researchers identified a range of regional historical and ongoing human activities that have damaged or restructured food webs in the Southern Ocean over the past few decades; 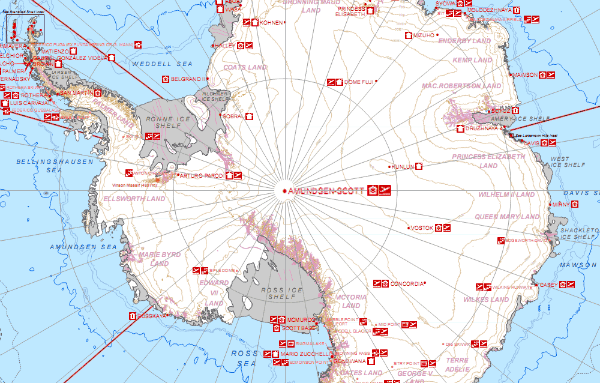 Oh, yes, don't forget drilling of Lake Vostok, or Lake Ellsworth...Lot's of theories there to tell.

As noted in the graph below, human activities in the sub-Antarctic islands have contributed to approximately 200 non-native species, both intentional (rabbits and reindeer for food) and unintentional (mice, rates, worms and grasses). They have come to survive in - and sometimes to dominate - their habitats, often causing alterations to the ecosystems through extinction or decreased abundance of native species. 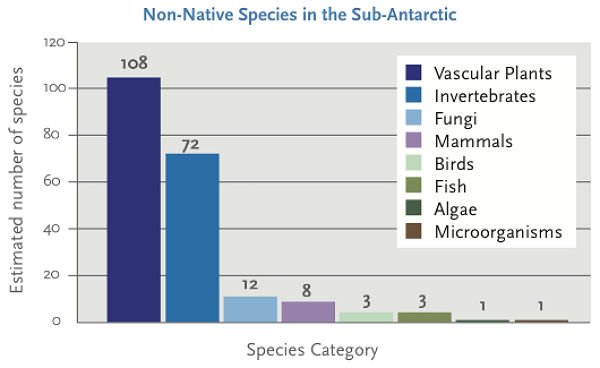 An increase in boats means a greater chance of an oil spill in an area that would be very difficult to clean up. More than a dozen "vessel emergencies" have been reported in the Southern Ocean in the past six years - that includes a Chilean vessel that went down in 2007 carrying 50,000 gallons (190,000 liters) of diesel. A Brazilian ship sank in April.

While the Antarctic Treaty forbids commercial mineral extraction on the continent, this provision is subject to change and doesn't stop the countries that haven't signed onto the treaty. With the increasing impact of climate change and need for fossil fuels and mineral resources, it seems inevitable that political and economic forces will lead people to consider exploiting Antarctica. Deep-water drilling today is practiced worldwide and subfloor completion technologies are rapidly advancing, so barriers in the past may soon be overcome increasing the threat to Antarctica in the not-so-distant future.

The treaty also doesn't prevent offshore exploration, which is becoming more feasible as technology advances and demand for oil and other resources grows.

“The bottom line is that we need to make sure that existing agreements and practices that address and respond to these threats are robust enough to last for the next 50 years, and that they truly provide the necessary protection of Antarctica that we all wish for and that we owe to future generations.” 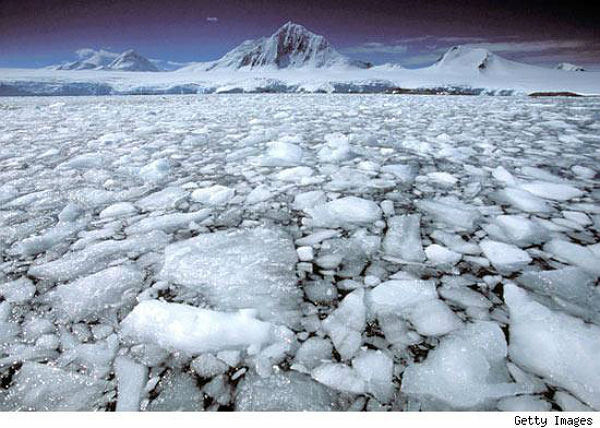 There is not enough data available to base predictions on and the way things work is not fully understood yet. That's what makes the future predictions hard work to do. Most models from different researchers and teams tend to agree however that there will be some small changes in temperature over the next 50 years. The rise in global temperature is adding more moisture into the atmosphere and more of this is reaching Antarctica so giving a greater snowfall to offset the melting ice. Despite all the snow and ice there, Antarctica is actually classed as a desert with very little snowfall. It is just that what does fall there stays there so it builds up over a long time period.

Anyhow, we must become aware of changes that we are facing right now, globally and one of the best ways is to observe the changes in pristine parts of our planet, because this places are the storytellers of future things to come.