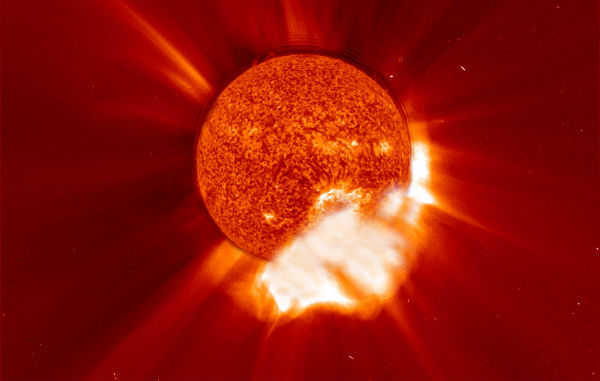 A powerful solar flare was unleashed from a massive sunspot 1520, blocking high-frequency radio communication in the Northern Hemisphere and producing the potential for auroras. It’s the second major solar storm to impact Earth in less than a week.

Giant sunspot AR1520 unleashed a X1.4-class solar flare on July 12, 2012 at 16:52 UTC and was accompanied by a large Coronal Mass Ejection (CME). CME particles are made up of solar plasma that damage Earth’s electrical grid.

The latest model run by NOAA/SWPC now indicates the Earth-directed CME associated with yesterday’s R3 (Strong) Radio Blackout event will impact the earth’s magnetic field around 13:00 UTC on Saturday, July 14 by the first estimate. However, it looks like CME launched toward Earth by yesterday’s X-flare is moving faster than originally thought. Analysts at the Goddard Space Weather Lab have revised their forecast accordingly, advancing the cloud’s expected arrival time to 09:17 UTC on Saturday, July 14th. The WSA-Enlil Solar Wind Prediction has been updated and is calling for the CME Plasma Cloud to sweep past Earth by 12:00 UTC early Saturday morning. The latest model shows a Solar Wind increase to near 700 km/s. 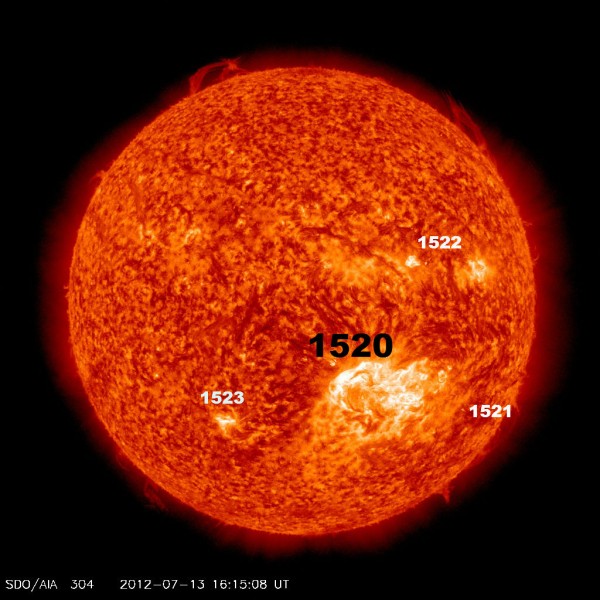 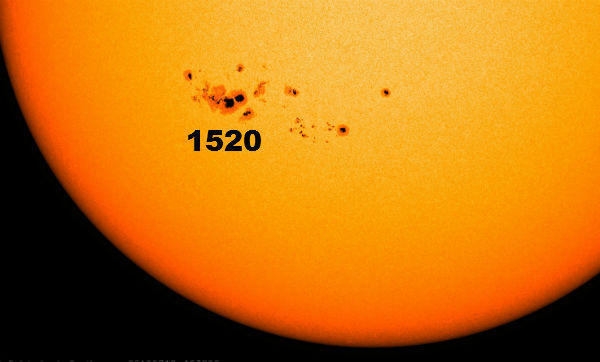 NOAA/SWPC estimates 80% chances for M-class and 35% for X-class solar flare in the next 24 hour. 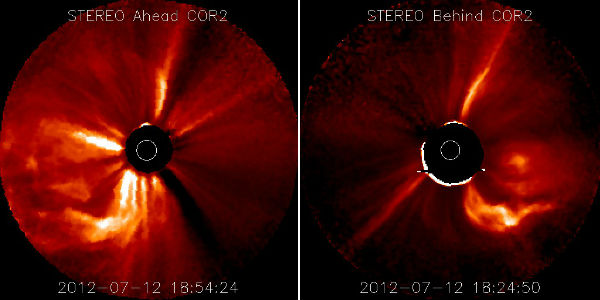 Sky watchers should be alert for auroras this weekend. G1 (minor) Geomagnetic Storm activity is expected to then ensue through the rest of the day. An S1 (minor) Solar Radiation Storm is now occurring, also a consequence of the flare/CME.

The pulse of extreme UV radiation partially ionized Earth’s upper atmosphere, disturbing the normal propagation of radio signals around the planet. Type II and IV Sweep Frequency Events were recorded. This event was also responsible for a Strong R3 Radio Blackout on the sunlit side of Earth with wide area blackout of HF radio communication on North Pole region and loss of radio contact for few hours on sunlit side of Earth. Low-frequency navigation signals were degraded for about an hour.

Monitoring stations in Europe recorded the sudden ionospheric disturbance. Solar protons accelerated by the blast are swarming around Earth. 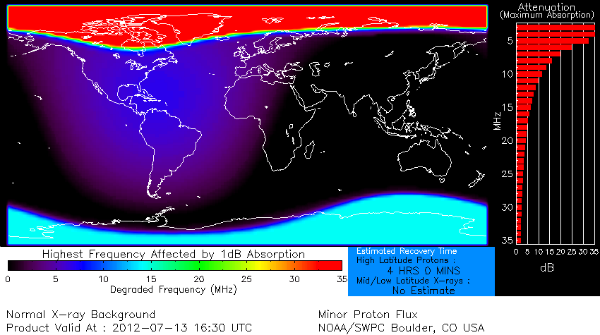 Solar activity was high. At 12/1649Z, a long-duration X1/2b flare was observed from Region 1520 (S16W09). The event was visible in GONG H-alpha imagery as a bright ribbon flare that erupted along the region’s long E/W oriented inversion line. Associated with this event were Type II (1268 km/s) and Type IV radio emissions along with an 800 sfu Tenflare. Limited satellite imagery indicated a CME was associated with this event. STEREO
Behind COR2 imagery observed a CME lifting off the west limb, first visible at 12/1710Z. Further analysis of this CME is ongoing. During the past 24 hours, Region 1520 grew in both area and spot count and maintained a complex beta-gamma-delta magnetic configuration. Region 1521 (S21W21) also grew in area and spot count and remained a beta-gamma magnetic classification. New Regions 1522 (N13W21) and 1523 (S27E31) emerged on the disk as simple bi-polar spot groups. Solar activity is expected to be moderate with a chance for X-class events for the next three days (13 – 15 July).

The geomagnetic field is expected to be at mostly quiet to unsettled levels for day one (13 July). Unsettled to active levels, with isolated minor storm intervals, are expected on days two and three (14 – 15 July) as effects from the 12 July CME are expected to become geoeffective.