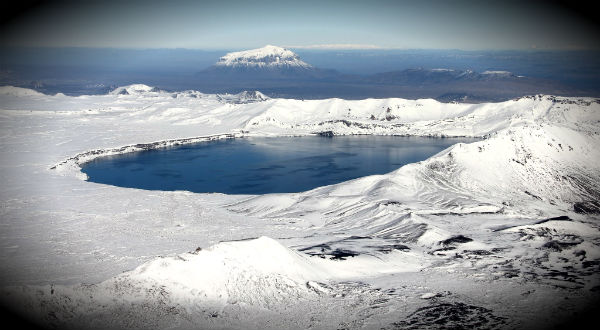 Something interesting going on up in Iceland – a few news reports have been talking about the crater lake on Askja caldera loosing  ice over the last month while other non-volcanic lakes around it and at lower elevations are still ice-covered. Normally, the lake isn’t ice-free until June or July. This increase in hydro-thermal activity seems to be located at the bottom of the lake. It could be that hot springs and fumaroles at the bottom of the lake are heating the water, causing the ice to melt.

It is very unlikely that meteorological factors are to blame for this effect, although it was unusually warm March. The other lakes in the highlands, for example Hágöngulón, are now ice-free. Apparently it seems that the strong, steady southwest winds in recent weeks and a light winter snow could be a factor. The question arises whether the geothermal heat is starting to simmer and are we facing an eruption of Askja.

Scientists from the Icelandic Meteorological Office and the University of Iceland will be trekking to Askja  after Easter to take measurements and set up instruments to help solve this mystery of the melting ice. In the meantime, the Icelandic government has declared the volcano “off-limits” to tourists on concerns of “the possibility of toxic gases”. 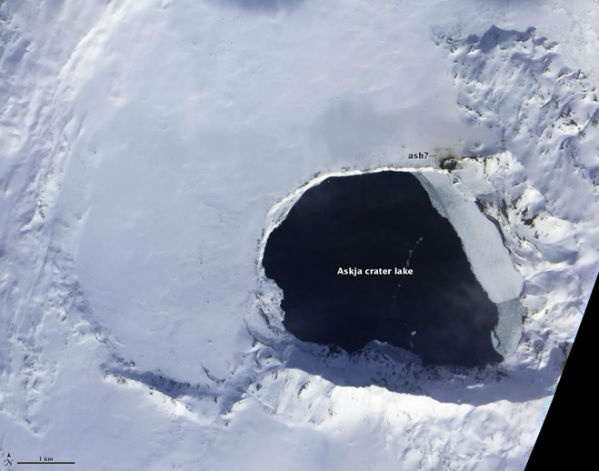 The current events in Askja volcano  started in Week 9 of the year 2010. Before that, Askja volcano has been showing signs of change since the year 2007 at least. In the year 2010, an earthquake swarm was recorded by Iceland Meteorological Office. Most of the earthquakes where at around 20 km depth, and it was followed by considerable amount of harmonic tremor activity. But this might have been an event in a series of event that started long time ago.

Last year (2011) there was a dike intrusion in north part of Askja volcano. This dike intrusion was clear by a earthquakes that took place. But it stopped and has not shown any activity again in this area. At the moment there is nothing that suggest eruption is imminent. But current progress in Askja volcano is something to keep an eye on.

As the activity at this moment suggests this is just starting, a long more might need to happen before an eruption. But that might change without warning as always. Since all volcanoes are impossible to predict what happens in them. Askja volcano has been having slight increase in earthquake activity during past few months. That suggests new magma is flowing into Askja volcano. But that earthquake activity has somewhat stopped completely and activity has quieted down from what it was few months ago. 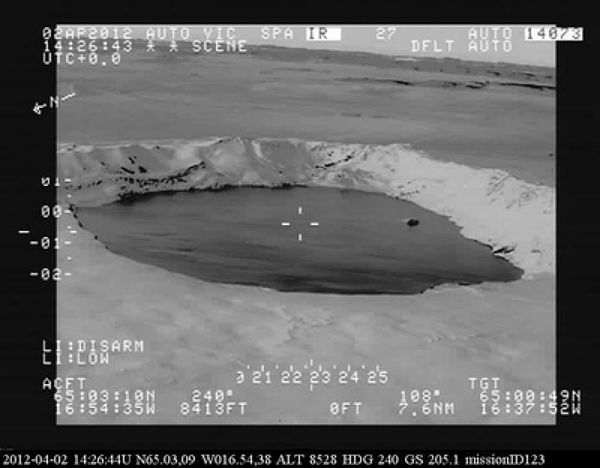 Askja is a large basaltic central volcano that forms the Dyngjufjöll massif. It is truncated by three overlapping calderas, the largest of which is 8 km wide and may have been produced primarily from subglacial ring-fracture eruptions rather than by subsidence. A major rhyolitic explosive eruption from Dyngjufjöll about 10,000 years ago was in part associated with the formation of Askja caldera. Many postglacial eruptions also occurred along the ring-fracture. A major explosive eruption on the SE caldera margin in 1875 was one of Iceland’s largest during historical time. It resulted in the formation of a smaller 4.5-km-wide caldera, now filled by Öskjuvatn lake, that truncates the rim of the larger central caldera. The 100-km-long Askja fissure swarm, which includes the Sveinagja graben, is also related to the Askja volcanic system, as are several small shield volcanoes such as Kollatadyngja. Twentieth-century eruptions at Askja have produced lava flows from vents located mostly near Öskjuvatn lake. (GVP)

The most recent activity at Askja was in 1961 that produced lava flows near Öskjuvatn – a pattern of eruption that was seen in numerous times since the VEI 5 eruption in 1875. That caldera-forming eruption in 1875 was large enough that ash and tephra fell as far away as Norway and Sweden. Much like the 2010 Eyjafjallajökull eruption, the explosivity of the eruption was likely aided by the meltwater that is readily available at Askja. If you go back to the rhyolite eruption in ~8910 B.C., that ash from that caldera-forming event is found over much of Europe.