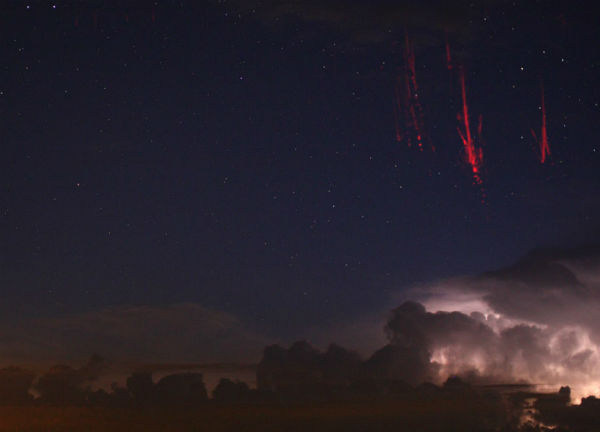 The first sprites of summer are starting to appear in the skies of North America. It looks like the sprite season is beginning early this year – summer is almost three months away. Sprites are electrical discharges that come out of the top of thunderclouds, or cumulonimbus, opposite ordinary lightning bolts which plunge toward Earth. They are triggered by the discharges of positive lightning between an underlying thundercloud and the ground. Sprites can tower as high as 90 km above ground. Sprites appear as luminous reddish-orange flashes. That makes them a form of space weather as they overlap the zone of auroras, meteors, and noctilucent clouds. Because they are associated with lightning, sprites are most often seen in summer months, but in the past few days sprites have been reported in Texas (particularly near the Mexican border) as well as in New Mexico. 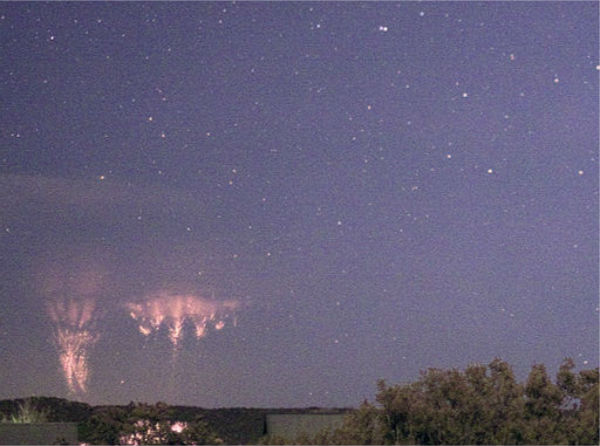 Sporadic visual reports of sprites go back at least to 1886, but they were first photographed on July 6, 1989 by scientists from the University of Minnesota and have subsequently been captured in video recordings many thousands of times. 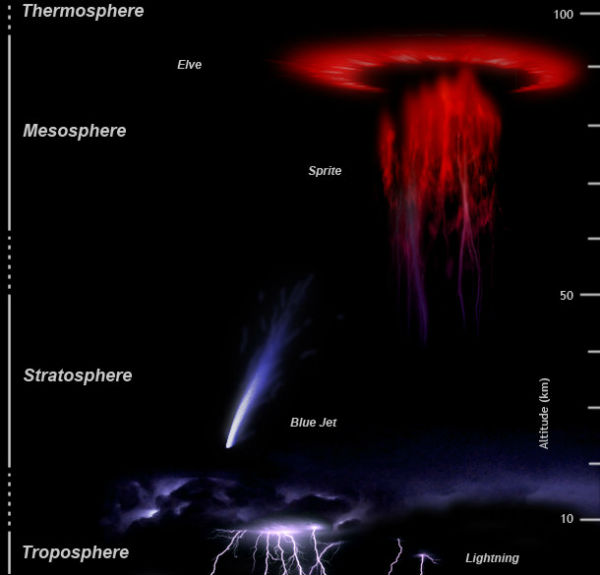 Sprites have been observed over North America, Central America, South America, Europe, Southern Africa (Zaire), Australia, the Sea of Japan and Asia and are believed to occur during most large thunderstorm systems. Sprites are colored reddish-orange  in their upper regions, with bluish hanging tendrils below, and can be preceded by a reddish halo. They last longer than normal lower stratospheric discharges, which last typically a few milliseconds, and are triggered by the discharges of positive lightning between the thundercloud and the ground. They often occur in clusters of two or more, and typically span the altitude range 50 kilometres (31 mi) to 90 kilometres (56 mi), with what appear to be tendrils hanging below, and branches reaching above. 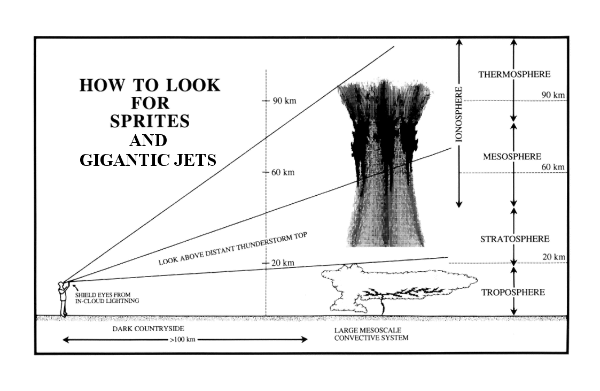 Optical imaging using a 10,000 frames per second high-speed camera shows that sprites are actually clusters of small (10–100 m, 30–300 ft) balls of ionization that are launched at an altitude of about 80 km and then move downward at speeds of up to ten percent the speed of light, followed a few milliseconds later by a separate set of upward moving balls of ionization. Sprites may be horizontally displaced by up to 50 km from the location of the underlying lightning strike, with a time delay following the lightning that is typically a few milliseconds, but on rare occasions may be up to 100 milliseconds.