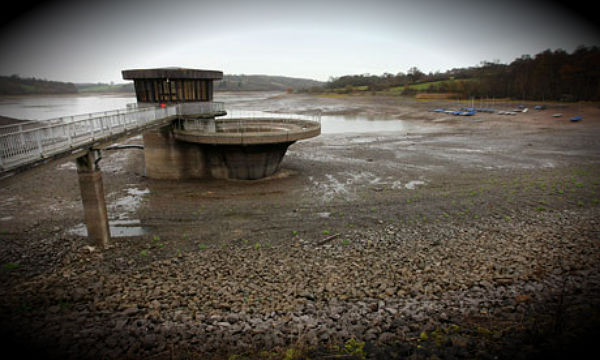 Drought  has put a squeeze on water supplies in parts of England and its now has begun to spread. It was underway in East and South East England earlier this year. As the drought-hit regions faced drastic restrictions on consumption, experts issued an extensive checklist to prevent households from exploiting loopholes. Predictions of continuing dry weather have raised fears that restrictions could be extended to car washes, road cleaning and public pools. The average person uses 150 litres of water a day. Water company infrastructure across England and Wales leaked 3.4billion litres a day in 2010/11 – a third of the UK’s usage – according to the regulator Ofwat. (Watch video of experts assess drought in the South East)

In Yorkshire, drought has lowered river levels and soil moisture, but reservoirs of a major area supplier were still at 94 percent. Some parts of Yorkshire have had the driest 12 months since 1910, and river levels are falling. Hosepipe bans may also be enforced in  East Yorkshire and Wiltshire which are at ‘high risk’ of drought conditions this summer, the agency’s Drought Prospects report said.

Britain is already facing the drought affecting fruit and cereal crops, as well as destroying wildlife habitats and causing fish to die in low rivers. If things continue to get worse, that’s when agriculture will be affected and public parks will struggle with maintaining their gardens. Vegetable crops such as potatoes, carrots, onions, broccoli and lettuce, which are being planted this month to be ready in late Spring, are set to be the worst affected by the low rainfall and parched soil. The price of a loaf of bread and a pint of beer could also be hit if the dry conditions continue as wheat and barley crops are harvested in late summer. During the last major drought of 2005-6 which affected a smaller area – only the South East – some vegetables prices spiked by as much as 40 per cent.

The last two years have been very dry across many parts of England with some areas seeing as little as 60% of their normal rainfall in that time. Even sustained rainfall over the next few months would have a limited impact, however we are working with the water industry to make sure they have the best weather forecast information available to help them manage their resources. (Rob Varley, Operations Director at the Met Office)

Seven water companies serving the East and South East stated early in March that they would put water conservation measures in place from April 5th – they would enforce Temporary Use Bans – affecting one in three UK homes. Customers of Anglian Water, Southern, Southeast, Thames, Veolia Southeast and Veolia  Central – which cover parts of London and the Home Counties – and Sutton and East Surrey Water will be affected. Water companies said that without persistent above-average rainfall for several weeks, the unpopular measures could last until the end of the summer in the 14 counties which are already officially in drought. 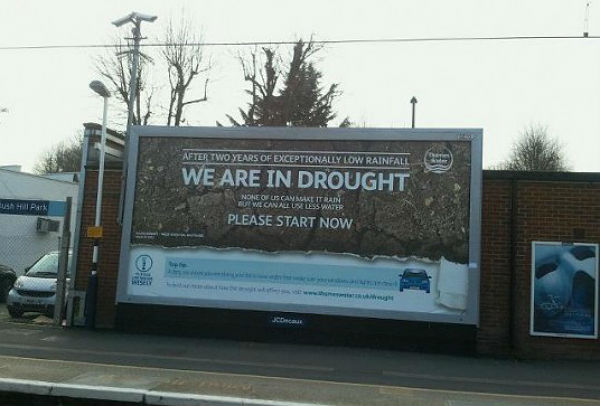 What you can’t do:

And while this bans are very unpopular we ask you how come they came so late. For years we were facing water shortages in “third world” countries, and yet, now when the rich counties starting to feel the impact of water shortages we starting to understand that we have a problem in our backyard. And all these years we were watching the problem outside our backyard and we didn’t give a damn about it. Yes, that is the truth people. We must act responsible, and start to educate ourselves, find out the real situation and start to take some action about it. We must start to act waterwise!

How to save water in your garden from National Trust on Vimeo.

The restrictions were brought in following two years of chronically low rainfall which has left rivers dry and reservoirs down to record low levels.  Importantly, this includes two dry winters – the periods when we would normally expect our rainfall to replenish river, reservoir and groundwater levels. The latest figures revealed that groundwater levels across the affected region are even lower than during the 1976 drought when taps were switched off in some cities, and residents had to use standpipe in the street. It was 1921 when the UK last went through a drought as bad as the current crisis. Martin Baggs, chief executive of Thames Water, said water levels in the underground aquifers were some of the lowest ever recorded.

2010 was the eleventh-driest year in the series from 1910 and the driest since 2003. The dry weather continued during 2011 with large parts of central, eastern and southern England having well below average rainfall – several Midland counties – such as Shropshire, Nottinghamshire, Leicestershire and Warwickshire – had their driest year on record according to MetOffice.

This week south and east Yorkshire have moved into drought. Areas from Sheffield in the south of Yorkshire to Scarborough in the east fall into the drought zone, with areas around Doncaster, Hull and Driffield also affected. But while the Rivers Don, Rother, Hull and Derwent are low or very low for the time of year, public water supplies are not currently affected.

East Anglia and south east England are also in drought. Parts of the Midlands and the south west are also experiencing the impacts of dry weather.

In Wales, the current position and outlook for summer is normal. However, an exceptionally dry spring and summer could mean the position in Wales may change.

March has been particularly dry and warm, with an average temperature of 8.5C, about 3C above the normal, making it potentially the third driest March since records began in 1659. Last week most areas of the UK received less than 1mm of rainfall and the dry conditions have caused streams and rivers in Herefordshire, Glouestershire Oxfordshire and Yorkshire to dry up. The Environmental Agency is now on standby to transfer fish to safety.

Experts say that twice the average rainfall will be required over the coming months to replenish the water table. During coming months, the warmth of spring and summer will cause drought impact will grow, barring a shift to at least normal rainfall. In the meantime, drought areas will have dry weather through at least Sunday, then rainfall next week will likely be less than normal according to AccuWeather.com analysis.

The Met Office’s long-range forecast, which is given to Government and businesses, revealed that the chances of heavy rain are as low as 10 per cent between March and May, compared with a long-term average of 20 per cent.