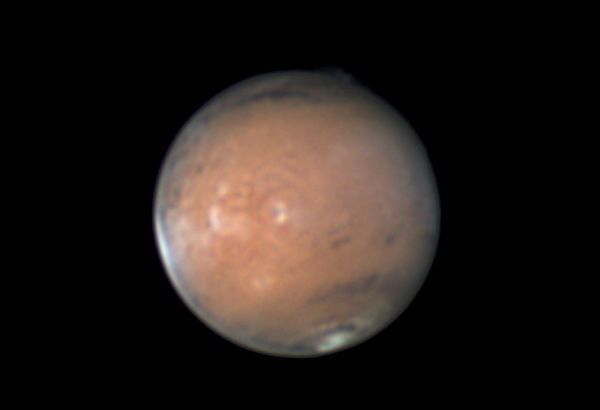 Strange phenomenon spotted over Mars two weeks ago puzzled astronomy community. An unusual protrusion has appeared in the planet’s southern hemisphere, preceding the sunrise terminator. Astrophotographer Wayne Jaeschke reports on his website of a “strange feature” over the Martian plain called Acidalia that moves with the planet and seems to rise over the limb, occurring at 190.5° east, 43.7° south. Some of the observers suggest the feature extend 150 miles up from the surface. Other planetary observers also report capturing the feature as the area rotated into view during the past few nights, and planetary photographers from Europe have identified it in their images as far back as March 12th. Although there has been plenty of conjecture as to what this strange extension might be, nothing has been proven as of yet. 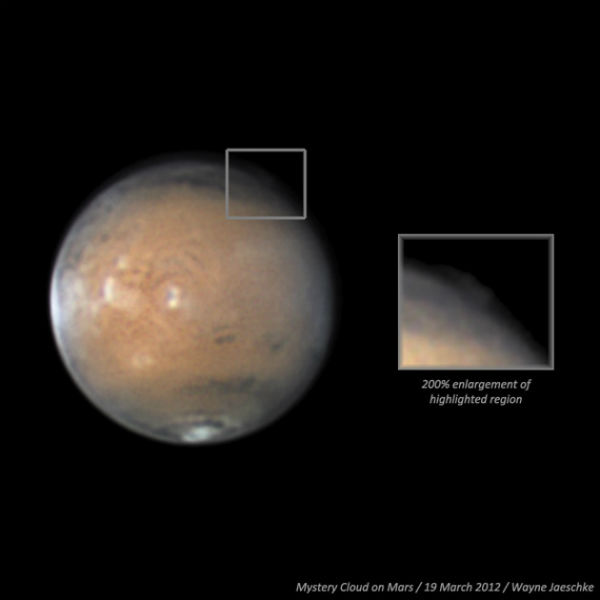 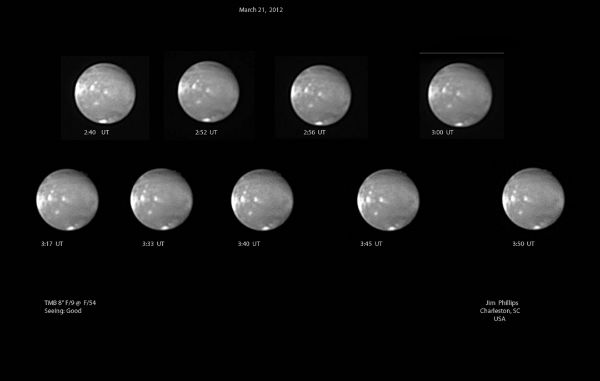 Atmospheric researchers from Arizona State University  are pretty excited about the possibility of not only getting a good look at the cloud structures, but also their temperatures. Whatever it is – or was – the feature is diminishing in size. This has led some to believe that it was some sort of transient-type event. Some suggestions are that it could be a dust cloud from a meteorite impact, a massive storm system or a trick of light. The THEMIS data for the area isn’t showing enough dust in the upper atmosphere to suggest a dust plume from an impact. The most likely scenario at this time is a major mesospheric cloud being caught in sunlight where the sun had risen at the cloud but not on the underlying ground. Some suggest that it could be aurora display but Mars doesn’t have a global magnetic like Earths, thus aurora wouldn’t be concentrated near the poles, if there is any aurora activity on Mars at all. Mars Global Surveyor mapped ‘umbrella-like’ localized fields back in 2004. Observations by the SPICAM instrument (Spectroscopy for the Investigations and the Characteristics of the Atmosphere on Mars) made on 11 August 2004, revealed light emissions now interpreted as an aurora. This feature is very localized and has shown up at the same time each day on Mars for at least 11 days in a row. Bruce Cantor at the Malin Space Science Institute says its most likely a condensate/haze cloud made up of water. 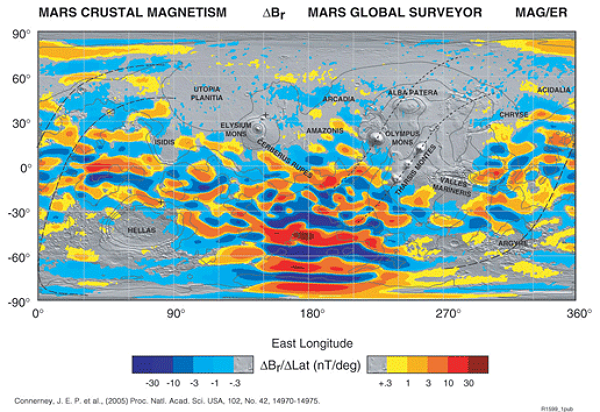 Arizona State University astronomer Jonathon Hill and his colleagues will be looking at the area where the cloud was spotted using the Thermal Emission Imaging System, or THEMIS, which is one of the instruments on NASA’s Mars Odyssey orbiter. THEMIS will be checking out heightened cloud activity around Mars’ shield volcanoes as well as around the southern site spotted by the amateurs. Pictures from a camera on NASA’s Mars Reconnaissance Orbiter, called the Mars Color Imager, or MARCI, might provide further clues about the southern cloud feature. And amateur astronomers are sending out the alert for observers to keep a close watch on the Red Planet over the coming days.

There’s been lots of buzz about the high-altitude cloud on Cloudy Nights and other online discussion forums for skywatchers. Sky & Telescope’s Sean Walker says the puff of white was first noticed on March 20 by Wayne Jaeschke, an amateur astrophotographer from Pennsylvania. Since then, other observers have identified the feature in images going back as far as March 12.

Although unusual, similar “terminator projections” have been noted throughout observational history of the Red Planet, the last being imaged by Japanese amateur Isao Miyazaki on November 8, 2003. 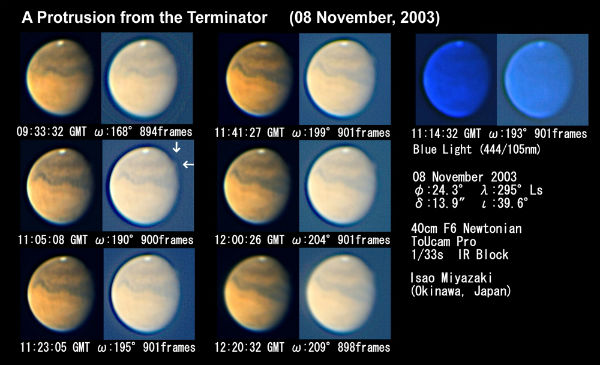