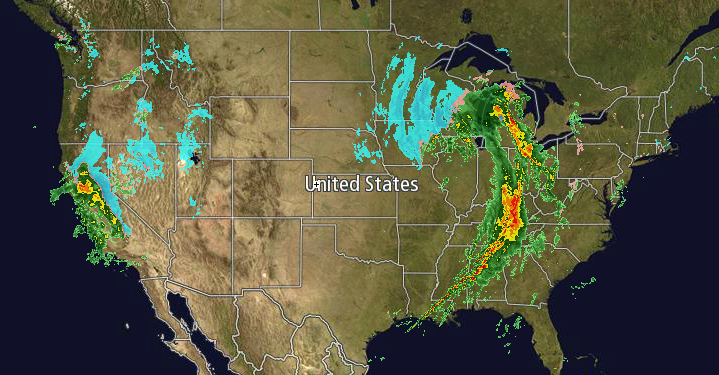 There have been several tornadic outbreaks with damaging winds and hail… in Arkansas, Illinois, Tennessee, Louisiana, Missouri, Kentucky, Ohio, Alabama, Mississippi, Indiana, Louisiana and Michigan… Be prepared if you live in any of these states!

Twisters downed trees and powerlines in Arkansas leaving thousands without power late Sunday, as forecasters warned that tornadoes and heavy storms could mete out damage to several southeast states into Monday.

About one third of Arkansas tornadoes occur at night and are difficult to see in the darkness, the national weather service said, recommending residents in the state to take cover as a precaution.

In Alabama, residents were bracing for storms that could hit after dark on Sunday or overnight with a strong cold front from the west combining with warm moist air flowing up from the Gulf of Mexico, according to the National Weather Service.

The weather service said thunderstorms could bring wind gusts up to 80 mph, tornadoes or golf ball-sized hail in Mississippi, although no damage or injuries were reported late on Sunday.

Farther west, the weather service warned of a high fire danger in Texas with wind gusts of up to 50 mph.

A second stormfront was expected to hit California late Sunday night, bringing significant snowfall to the mountain regions, according to the National Weather Service, before rolling into the southern United States later in the week.

Parts of central and southern California were under a winter weather warning as a storm system was expected to sweep into the area late Sunday into Monday morning, with the weather service predicting 6 to 12 inches of snow.

The Sierras and the Rockies may accumulate as much as 3 feet of snow, the weather service said, and driving in mountain passes will be “very hazardous” due to low visibility, gusting winds and heavy snowfall. (Reuters)

The weather service also warned of high winds along southern California’s desert roads that would pose a particular danger to trucks and motor homes.

In Reno, Nevada, meanwhile, snowfall provided welcome relief to firefighters who were monitoring remaining hotspots from a blaze that raged near the outskirts of the city beginning Thursday, destroying 30 houses and prompting thousands of people to flee their homes.

In the upper Midwest, freezing drizzle was expected to make roads and sidewalks slippery from southeastern Minnesota into Wisconsin, changing to snow later Sunday, the weather service said. Up to 4 inches of snow was expected farther north in southeast North Dakota and west central Minnesota.

In the northeast United States, a fast-moving storm from central Pennsylvania eastward dropped up to a foot of snow in parts of Rhode Island and Massachusetts on Saturday.