Reventador is waking up - Three volcanoes on alert in Ecuador

There is new activity recorded at Reventador volcano, as well as at Sangay and ongoing Tungurahua volcanoes in Ecuador. New reports are coming from nearby Colombian Galeras and Fuego volcanoes. Down North in Chile Lascar is waking up and Cordon-Puyehue Calle continues with ongoin activity.

Constant emissions of gas and steam rising about 300 m above the crater and drifting WNW was observed on January 6-7 by IG staff conducting fieldwork at Reventador volcano. The emissions originated from a growing lava dome that was a few tens of meters above the crater rim and almost filled the base.

Reventador is the most frequently active of a chain of Ecuadorian volcanoes in the Cordillera Real. A 3-km-wide caldera breached to the east was formed by edifice collapse and is partially filled by a young, unvegetated stratovolcano that rises about 1,300 m above the caldera floor. Reventador has been the source of numerous lava flows as well as explosive eruptions that were visible from Quito in historical time. Frequent lahars in this region of heavy rainfall have constructed a debris plain on the eastern floor of the caldera. The largest historical eruption at Reventador took place in 2002, producing a 17-km-high eruption column, pyroclastic flows that traveled up to 8 km, and lava flows from summit and flank vents. (GVP)

Based on information from Guayaquil MWO and a pilot report, a possible ash plume from Sangay was reported on 8 January.  The isolated Sangay volcano, located east of the Andean crest, is the southernmost of Ecuador's volcanoes, and its most active. The dominantly andesitic volcano has been in frequent eruption for the past several centuries. Constant eruptive activity has caused frequent changes to the morphology of the summit crater complex. (GVP) 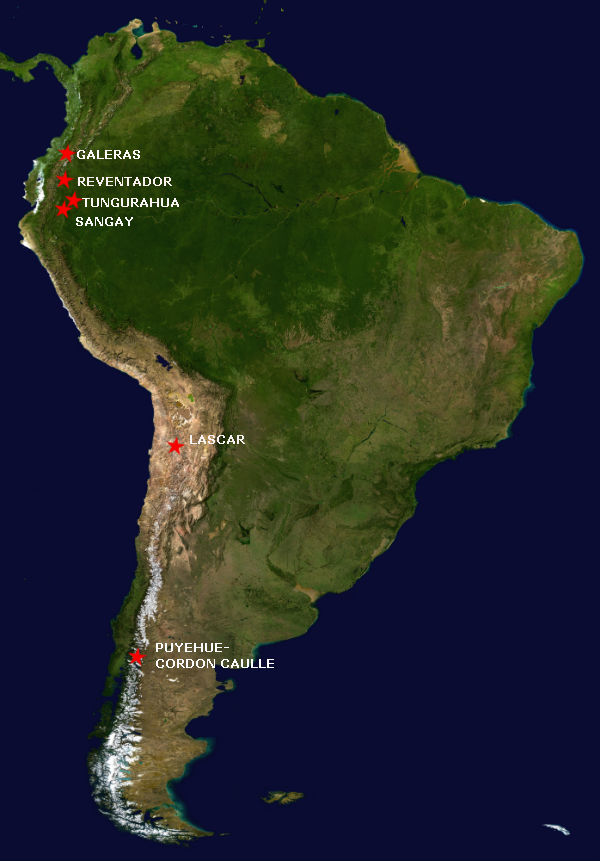 Decreasing activity at Tungurahua was reported during 4-10 January. On 4 January steam plumes rose as high as 500 m above the crater and drifted W. Additional steam plumes observed on 8 January also drifted West. The latest eruption began in October 1999 and prompted temporary evacuation of the town of Baños on the N side of the volcano.

Here is  a list of active and extinct volcanoes in Ecuador: