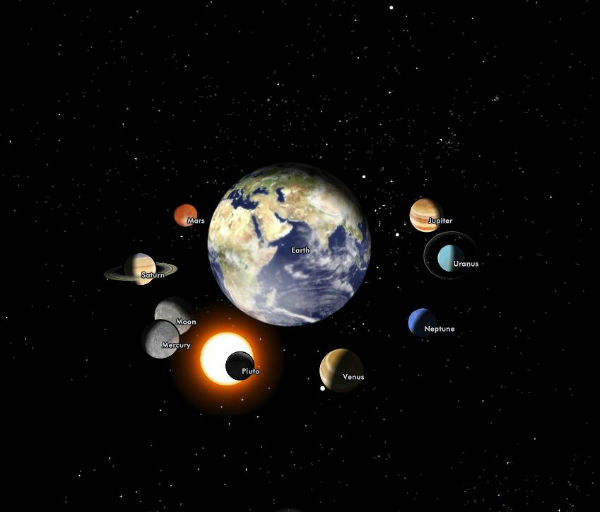 This week presents a rare opportunity to see all the major planets of the solar system in a single night.

Just after sunset tonight (Dec. 21) the two brightest planets will be shining, weather permitting. Venus, the brightest, rides low in the southwest just above the setting sun. Jupiter, the second brightest planet, is high in the south. If you have a telescope, you can find Uranus and Neptune between Venus and Jupiter. The sloping line across the sky that the four planets define is called the ecliptic, because it is the line along which eclipses take place.

Get up around 6 a.m. local time tomorrow morning, and you can see the rest of the planets. The ecliptic is now sloping in the opposite direction, and along it are arrayed Mercury, the moon, Saturn, and Mars. In the background are three of the brightest stars in the sky: Arcturus, Regulus, and Spica.

Pay particular attention to Spica because, over the next year, the moon will make numerous close passes near Spica, actually passing in front of the star and occulting it on a few occasions. Such close approaches between astronomical objects are called conjunctions. While not of much importance to modern astronomers, they are always interesting to observe. 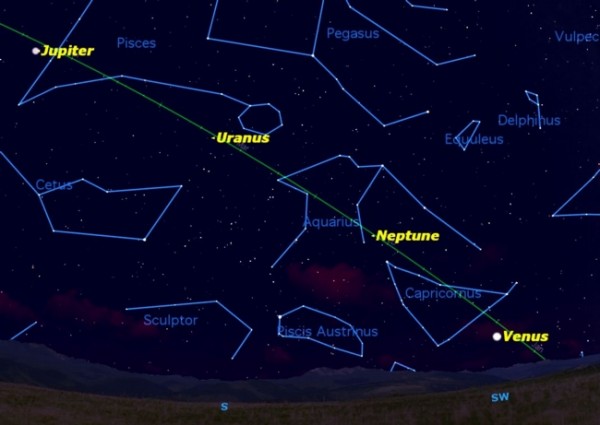 Tonight’s array of the planets is the opposite of a conjunction. None of the planets are particularly near each other. What makes this event special is that the planets are almost equally spaced around the ecliptic, the only large gap being between Mars and Jupiter, 135 degrees. Your closed fist held at arm’s length covers about 10 degrees of the night sky. The only time you can see both Mars and Jupiter tonight is around midnight. Jupiter will be setting in the west just as Mars is rising in the east.

Uranus and Neptune will be difficult in the evening, because they are faint and require a telescope. Mercury will be difficult in the morning because it will be close to the rising sun, but use the thin crescent moon as a guide to its location. If you’re clouded out tonight, keep trying over the next week, as the planets don’t move very quickly. (Space.com) 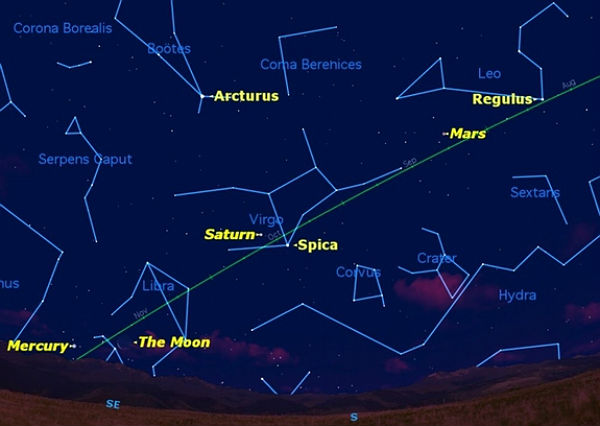 One planet might get overlooked: the Earth. After you’ve looked at the seven major planets in the sky, don’t forget to look down at your feet and see your home planet.

On Dec 24. every year, you can go out around 8 p.m., spot Orion well up in the southeast, and look down below it for bright Sirius on the rise. When Sirius is low it often twinkles vigorously with vivid, flashing colors, an effect that’s especially visible in binoculars. All stars do this, but Sirius is so bright that the effect is especially pronounced.

With amazing tail of Comet Lovejoy and incredible planets round up this Christmass will be something special for night sky watchers!