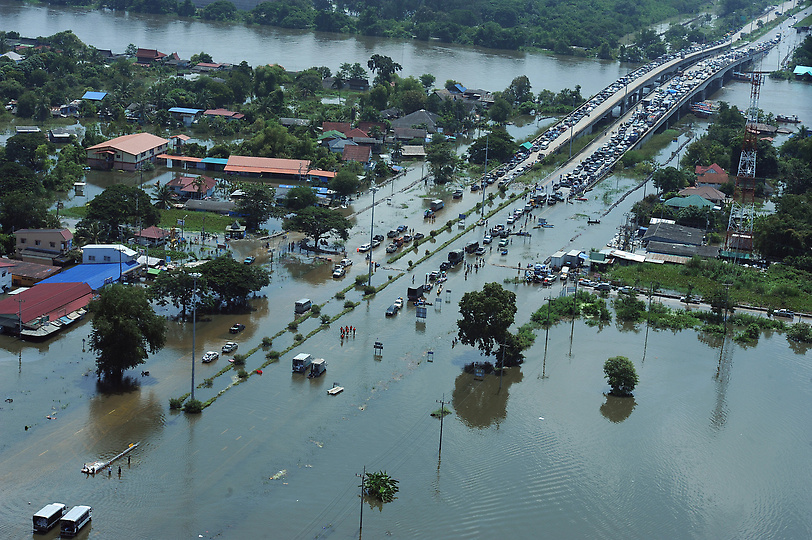 The Thai capital, built on swampland, is slowly sinking and the floods currently besieging Bangkok could be merely a foretaste of a grim future as climate change makes its impact felt, experts say. Bangkok is sinking! The low-lying metropolis lies just 30 kilometres (18 miles) north of the Gulf of Thailand, where various experts forecast sea level will rise by 19 to 29 centimetres (7 to 11 inches) by 2050 as a result of global warming. Water levels would also increase in Bangkok's main Chao Phraya river, which already overflows regularly.

The capital's gradual sinking has also been blamed on years of aggressive groundwater extraction to meet the growing needs of the city's factories and its 12 million inhabitants. As a result Bangkok was sinking by 10 centimetres a year in the late 1970s, according to a study published last year by the World Bank, the Asian Development Bank (ADB) and the Japan Bank for International Cooperation. In the Samunt Prakan harbor, about 15 kilometers away from Bangkok, the suburban houses along the river are already flooded certain months of the year.

That rate has since dropped to less than one centimetre annually thanks to measures of groundwater pumping control. But Bangkok is still sinking at "an alarming rate" of one to three centimetres per year. 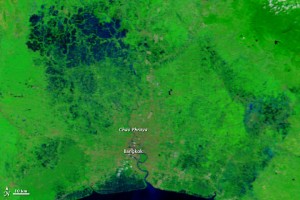 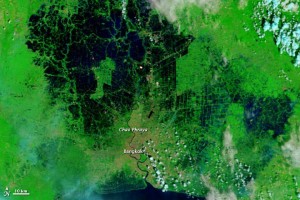 The Moderate Resolution Imaging Spectroradiometer (MODIS) on NASA’s Terra satellite captured these images on November 13, 208 (left), and November 8, 2011 (right). The image from 2008 shows relatively normal conditions in which the Chao Phraya River flows through a dry Bangkok. Three years later, water nearly surrounds the city, west to north to southeast. Floods started in northern Thailand in July and spread southward. By November 8, floods had been slowly encroaching on the Bangkok, just north of the Gulf of Thailand, for three weeks.

"There is no going back. The city is not going to rise again," said the ADB's lead climate change specialist David McCauley.

Faced with the combined threats of land subsidence and rising temperatures and sea levels, the World Bank has predicted that Bangkok's flood risk will increase four-fold from now by 2050. And the Organisation for Economic Cooperation and Development has classified the Thai capital among the 10 cities in the world facing the biggest potential impact from coastal flooding by 2070.

Francois Molle, a water management expert at France's Institut de Recherche pour le Developpement said that in the long term, Bangkok would eventually be under water. The only question is when. (TerraDaily)

The Chao Phraya River basin, the area surrounding Bangkok, and the nearby provinces comprise a series of plains and river deltas that lead into the Bay of Bangkok about 30 km (19 mi) south of the city center.  Bangkok lies about two meters (6.5 ft) above sea level, which causes problems for the protection of the city against floods during the monsoon season. Occasionally after a downpour, water in canals and the river overflows the banks, resulting in floods in some areas. The Bangkok Metropolitan Administration (BMA) has recently installed higher banks alongside some canals to keep water levels from reaching street level. There are however some downsides for Bangkok's extensive canal routes, as the city is rumored to be sinking an average of two inches a year as it lies entirely on a swampand there are fears that Thailand's capital will be submerged by 2030.

On Wednesday, the Bangkok Post reported that the government's Flood Relief Operations Command (FROC) officials say it's very difficult to evaluate the likelihood of floods entering the city center because the water is moving underground through the city's sewers. Given the rapidly changing nature of the flooding situation in Bangkok, visitors should check multiple sources of information to make an informed decision about whether they should visit central Bangkok at the present time. 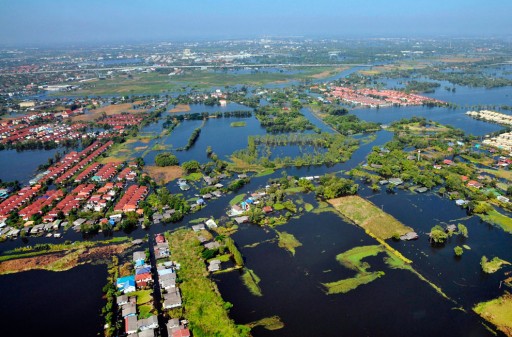 The sandbags erected to protect Bangkok have trapped a giant pocket of floodwater that extends for dozens of miles. Flood prevention workers had already laid the big bags of sand as a first 18km long flood barrier stretching from Khlong Prem Prachakorn southward. The wall cuts across Vibhavadi Rangsit Road through the northern boundary of Don Mueang airport. By sparing the low-lying capital, which lies in the delta of the country’s main river system, officials sacrificed the provinces to the north. Residents of a northern neighborhood clashed with the police during a protest calling to open a barrier that is flooding their homes but keeping an industrial area dry.

The floods have also disrupted Bangkok’s food- and water-supply chains. Many convenience stores and supermarket shelves are regularly short of items like bottled water, beer and non-perishable food. So far, city authorities has ordered evacuations in 11 of Bangkok’s 50 districts, and partial evacuations apply in seven more.

The Disaster Prevention and Mitigation Department reported that a total of 529 people were now confirmed dead and two people were missing in the great flood. Two more people were confirmed dead yesterday in central province of Phichit.
Today, flooding still prevailed in 24 of the 77 provinces and was affecting about 2.8 million people from 1.1 million households. Since mid-July the floods have affected about 3.3 million households and about 11.3 million people in 64 of 77 provinces, the department said. (Bangkok Post) 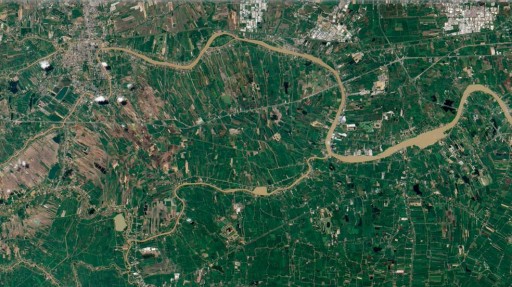 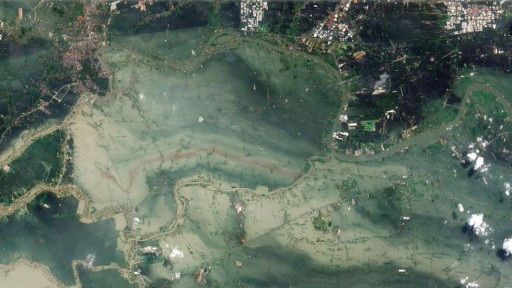 Data, except for 2011, from the Hydrology and Water Management Centre for the Upper/Lower Northern Region,Thai Meteorological Department: 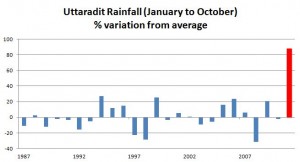 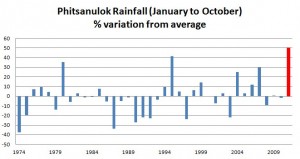 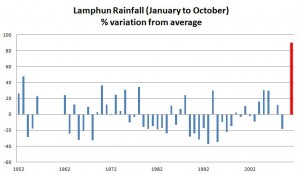