Severe flooding affected 2,000-year-old Roman amphitheatre as well as the nearby Roman Forum and Palatine Hill, and the ancient Roman port of Ostia, west of the capital. The Colosseum was particularly badly affected, with water pouring into the underground tunnels and galleries where gladiators and wild animals once waited before being hoisted into the ancient arena on wooden lifts for staged fights. At one point the tunnels, which were only recently opened to the public, were submerged to a depth of 4,5m (15ft).

The severity of the flooding of the amphitheatre was “unheard of and extraordinary”, said Francesco Giro, a senior heritage official.

The storm caused chaos to the city when it struck on Thursday morning (Oct 25), with public transport severely disrupted and cars submerged in flooded streets. Around 120mm of rain fell in just three hours, bringing Rome to a standstill, and there were around 7,000 lightning strikes. Gianni Alemanno, Rome’s mayor, declared a state of emergency and said the city had not known such a dramatic storm since 1953. (Telegraph) 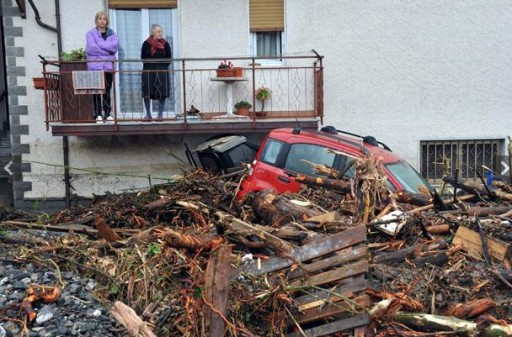 Authorities from Liguria, northeast Italy, have called for a regional disaster to be declared as tonnes of muddy water gushed through villages. Amateur video shows a violent torrent of water pouring through the centre of Monterosso, in Liguria. The water appears to reach the top of shop front windows.

"People are getting into their houses through the terraces, everything is flooded. Monterosso doesn't exist anymore," said Angelo Betta, mayor of Monterosso.

Diggers can be seen clearing roads blocked by fallen trees as cars struggled through water and debris. It has been reported that several bridges and houses have been destroyed by the flooding. Rescue teams said they were having difficulty reaching some of the flooded areas and people were being evacuated by sea from some towns along the spectacular coast. The Italian army has been put on standby to help in rescue efforts. (Telegraph) 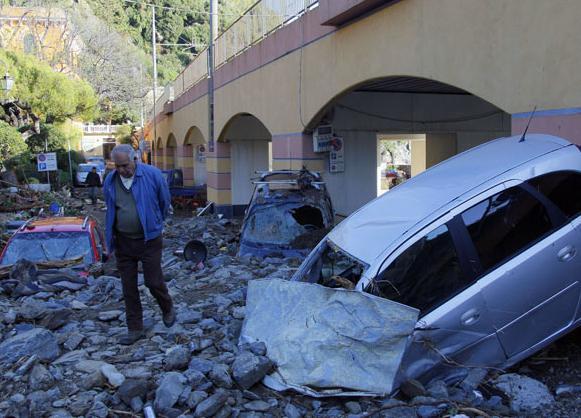 The worst affected region was Liguria, with at least two of the five World Heritage-listed 'Cinque Terre' coastal villages cut off as a result of roads being washed away. The walking trails and picturesque fishing villages of the Cinque Terre attract hundreds of thousands of international tourists, but two of them – Vernazza and Monterosso – were severely affected as rivers of mud poured down from the hills behind them. Huge amounts of mud had swept through the tiny settlement, causing an "unimaginable disaster". 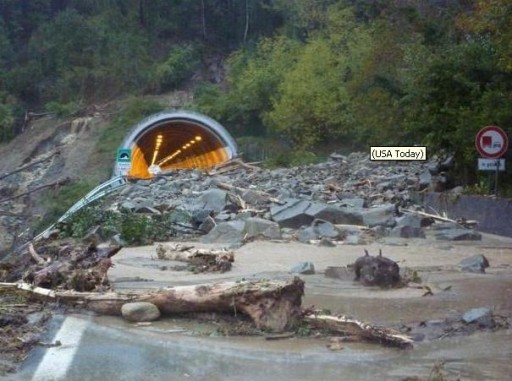 The civil protection department has issued a warning of more bad weather in northern Italy, particularly in Veneto and Friuli, throughout Wednesday. Rain is likely to spread to central and southern regions of Italy on Thursday. Civil protection officers have invited people in the areas involved not to travel and to stay away from rivers, bridges, gangways, flooded or otherwise affected areas, basements, underpasses and embankments. 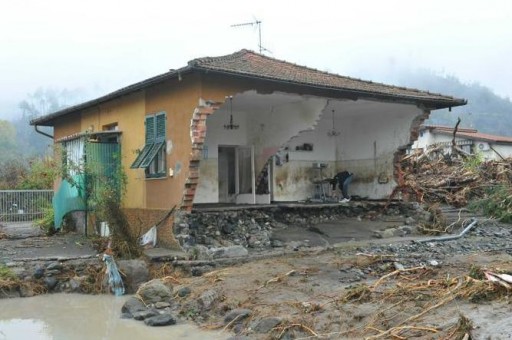 Disruptions to the road and rail systems have meant that it has so far been difficult to take assistance to storm-stricken parts of Liguria and Tuscany, including the municipalities of Ameglia, Beverino, Borghetto Vara, Brugnato, Calice al Carnoviglio, Monterosso, Pignone, Riccò del Golfo, Sesto Godano and Vernazze in the province of La Spezia, and municipalities in the upper Lunigiana area of the province of Massa Carrara. Communications also pose problems because damage to radio links has interrupted mobile and landline telephone services. (CorriereDellaSera)