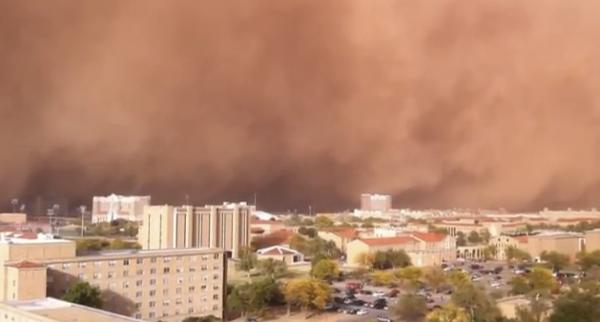 A giant dust storm known as a haboob swept through Lubbock, Texas, on Monday, blotting out the sun and turning everything a hazy copper.

Jerald Meadows, a meteorologist based in Lubbock, told the L.A. Times that smaller haboobs of around 1,000 feet (305 m) in height are fairly common in the area, but that yesterday’s whopper was “fairly rare.” He attributed the storm to the dry condition in the area, which have plagued most of Texas this year, and strong cold front with whipping winds that moved in from the Rockies. The storm traveled at an estimated 75 mph (120 kph). Haboob is Arabic for “strong wind.”

A haboob forms after a severe thunderstorm collapses. Rain-cooled air from the thunderstorm plummets to the ground at speeds up to 100 mph (161 kph), and with so much momentum that it can’t go into the ground. Instead, the winds kick up an enormous amount of dry, loose sand, which ripples outward. (OurAmazingPlanet) 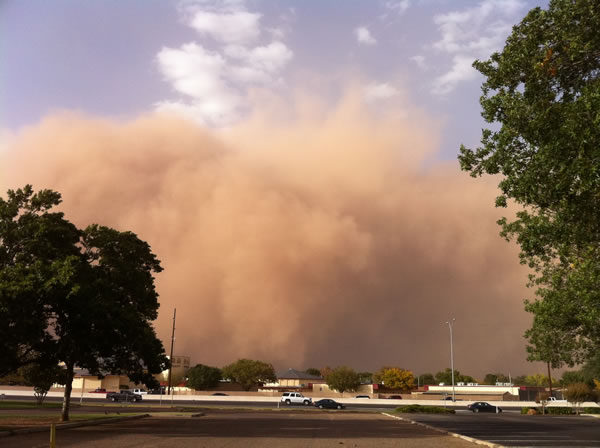 About 62% of the state was experiencing the worst two drought conditions last week, down slightly from the week before, according to the latest U.S. Drought Monitor report.

But many of Lubbock’s roughly 230,000 residents said they had never seen anything like Monday’s mammoth dust cloud, even during the state’s longest drought, which began in 1947 and lasted for a decade.