Intense swarms of tremors beneath one of the volcanic Canary Islands has placed residents of El Hierro on alert for a possible eruption. Spain’s Instituto Geografico Nacional (IGN) reported the nearly 9,000 seismic movements on the island since July 17 have caused measurable changes in the terrain.

El Hierro’s only eruption during recorded history was in 1793, when the Volcano de Lomo Negro vent rumbled for a month and produced lava flows.

Seismologists say they don’t know if the rising ball of lava causing the latest rumblings will break through the surface, but they have issued a “yellow” alert as a precaution.

IGN Director Maria Jose Blanco told reporters that any eruption would most likely have a “low explosive value.”

Tremors about 50,000 years ago produced an enormous landslide that cascaded into the ocean, creating a large tsunami that probably reached the North American coast.

The remains of a monstrous ancient landslide have been discovered in the Canary Islands. The remnants are one of the world’s best-preserved examples of a huge landslide that followed a mammoth volcanic eruption, allowing a team of researchers to pinpoint the date that the landslide occurred.

During what is known as a volcanic flank collapse, the southeast slopes of the island of Tenerife collapsed into the sea around 733,000 years ago during the eruption. A growing dome of hot lava pushed the side of the volcano outwards and triggered the landslide. The volcanic flank collapse traveled 10.5 miles (17 kilometers) to the shoreline and then farther into the ocean.

These landslides are poorly understood, largely because they happen about once every 25 years and the remains are spread out over the ocean floor, according to Dave Petley, author of the American Geophysical Union’s Landslide Blog. 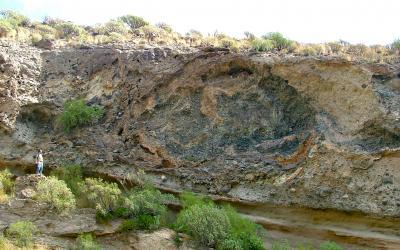 The onshore remains of the Tenerife landslide were discovered amid the canyons and ravines of the island’s desert landscape by volcanologists at the University of Leicester in the United Kingdom. The remains onshore were 164 feet (50 meters) thick over an area of 35 square miles (90 square km).

“It is one of the world’s best-preserved accessible examples of such an awesome phenomenon, because the debris from such landslides mostly spreads far across the deep ocean floor, inaccessible for close study,” said study team member Mike Branney of the University of Leicester. 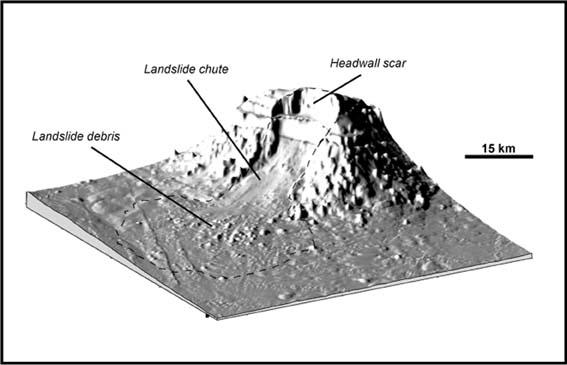 The Tenerife rubble includes blocks of rapidly chilled lava, added as the volcano erupted. Radioactive minerals within them enabled the researchers to provide such a precise date for this natural catastrophe. In the aftermath of the eruption and landslide, lakes formed as rivers were dammed by debris, and the change to the shape of the island altered the course of explosive volcanic eruptions there for hundreds of thousands of years afterwards, Branney said in a statement.

The researchers said that such phenomena are common but infrequent, and understanding them is vital so that researchers can better predict where and when landslides may occur. Their effects go far beyond a single ocean island. Tsunamis generated from such events may devastate coastlines thousands of miles away. (OurAmazingPlanet)

The findings have been published in the October edition of the journal Geology.

One of the most intriguing but poorly understood landslide types is that of the volcanic flank collapse.  In a volcanic flank collapse, the side of a volcano fails, usually catastrophically, generating a landslide.  These slides can be really big – tens or even hundreds of cubic kilometers – and they can travel huge distances along the sea floor.  Such failures grabbed attention a few years ago due to the potential for generating a catastrophic tsunami.

However, we understand such phenomena  really poorly.  There are a number of reasons for this, principally that:
a. They occur rarely (globally about one in every 25 years on average), so actually recording one is a challenge
b. The remains tend to lie in a very dispersed state on the floor of the deep ocean.  Fieldwork at 4 km water depth remains difficult, even if you are really good at holding your breath.

However, it is one particular aspect of these landslides that remains elusive, but is crucially important.  This is the trigger of the collapse event (i.e. of the landslide itself).  Numerous mechanisms have been proposed, including sea level change, climate change, hydrothermal pressure, intrusion of volcanic material, and various others.  It has proven very difficult to ascertain the importance of each of these.  This is an important question if we are to reliably estimate the hazard associated with future potential collapses.

In a paper published in Geology this month, Harris et al. 2011 report a very interesting find on the island of Tenerife, one of the Canary Islands. This is the remains of an ancient collapse event on the south-eastern part of Cañadas volcano.  The landslide deposit, which is up to 50 metres thick, has been mapped across a large area – 90 square kilometres – and this is just the onshore component of the mass, which may extend another 50 km offshore.  The deposit consists of a classic debris avalanche material, with large (typically up to 12 m long axis), shattered blocks in a highly disrupted, unsorted matrix.  This is typical of a highly energetic, very large collapse event. Intriguingly, in the upper part of the deposit some fluviolacustrine (water/lake) sediments are found in the remains of hollows, indicating that in the aftermath of the landslide shallow lakes formed on the surface, presumably as a result of blockages created by the landslide.  Associated with the landslide deposit are the remains of pyroclastic flows. 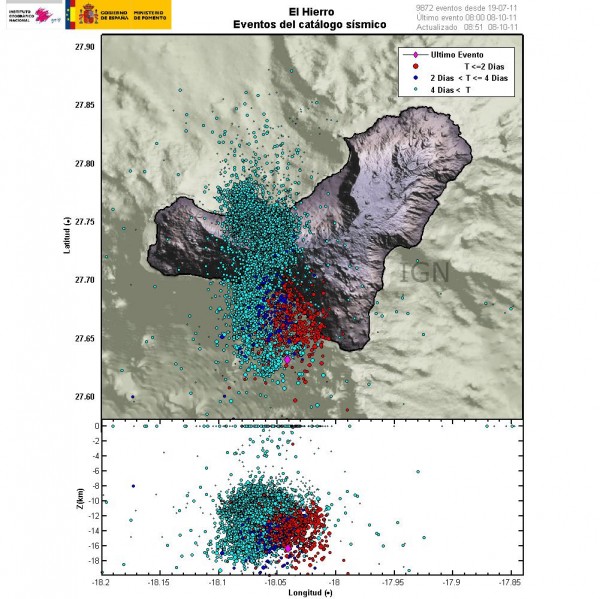 This is really interesting in itself, but the very well-preserved deposit allows both highly precise dating and a reconstruction of the events that occurred.  The dating yields a date of about 733,000 years ago, with an error of just 3,000 years.  So, the sequence of events is interpreted as being:
– An eruption event, termed the Helecho eruption started in the form of an explosive event that showered ash and then pyroclastic material across the local area;
– A dome grew on the volcano;
– This dome collapsed catastrophically, generating a landslide that travelled 17 km to the shoreline, and then probably much further in the ocean;
– Subsequent eruptions draped further pyroclastic, and then pumice, deposits on the surface of the landslide, and rainwater collected in hummocks to form small lakes; 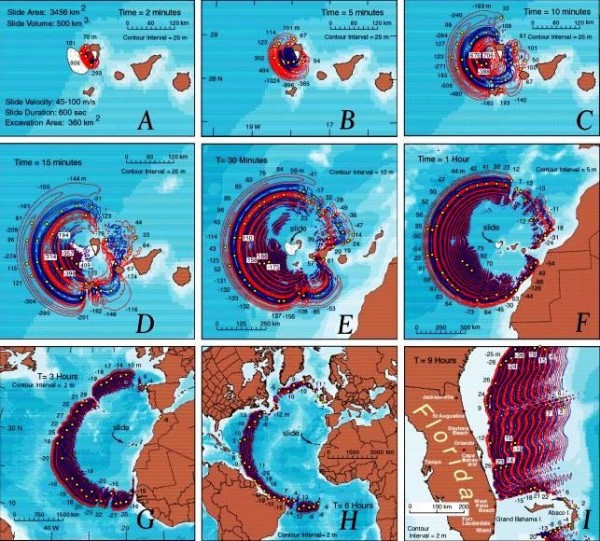 So, in this case the volcanic flank collapse was triggered by a large, explosive volcanic eruption.  Interestingly, the authors note that the landslide collapse left a gap in the rim of the caldera which subsequently channeled pyroclastic deposits to the south-east.

Of course this paper does not solve the question of what triggers volcanic flank collapses, but it is an important data point that validates one of the most likely mechanisms.  It also provides a great opportunity to study these landslides in detail, which should give us a much greater insight into the dynamics of these immense mass movements.“The Landslide Blog“