A large pumice raft was found floating to the west of Minerva Reef in an area about 600 km (372 miles) SE of Fiji and 500 km (310 miles) SW of Tonga, New Zealand's GeoNet reported today. Pumice rafts are created by submarine or near-ocean volcanic activity.

The rafts were discovered by an RNZAF flight on Wednesday, November 16, 2016 and later confirmed by GeoNet using satellite imagery acquired by NASA's MODIS on November 15 and 16.

GeoNet added that they are not aware of any active submarine volcanoes in this area.

"The nearest active submarine volcano is Monowai (400 km / 248 miles SE) and we know it was active on November 10 – 11," the agency said. However, this volcano 'usually does not produce pumice rafts, just discolored plumes.' 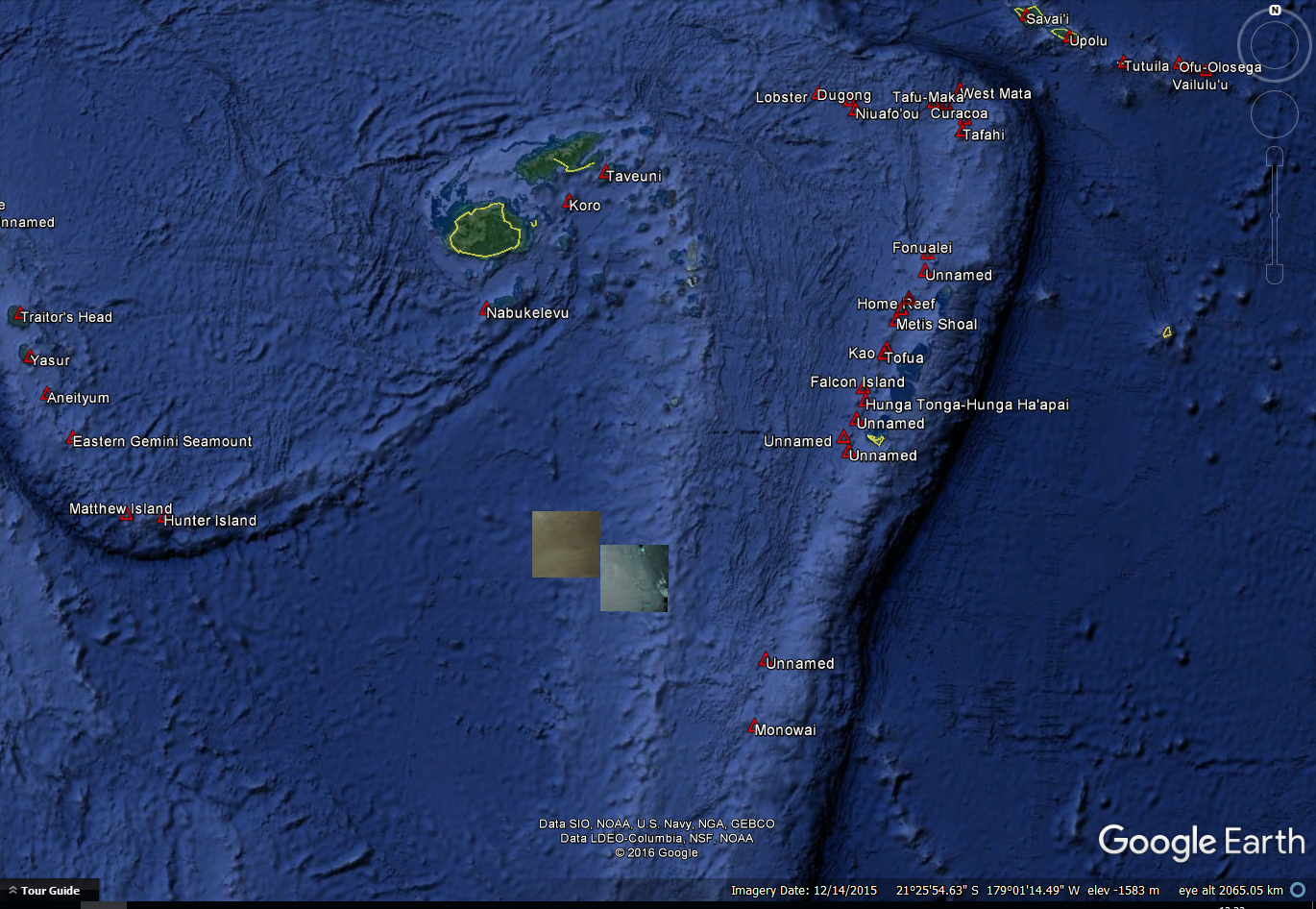 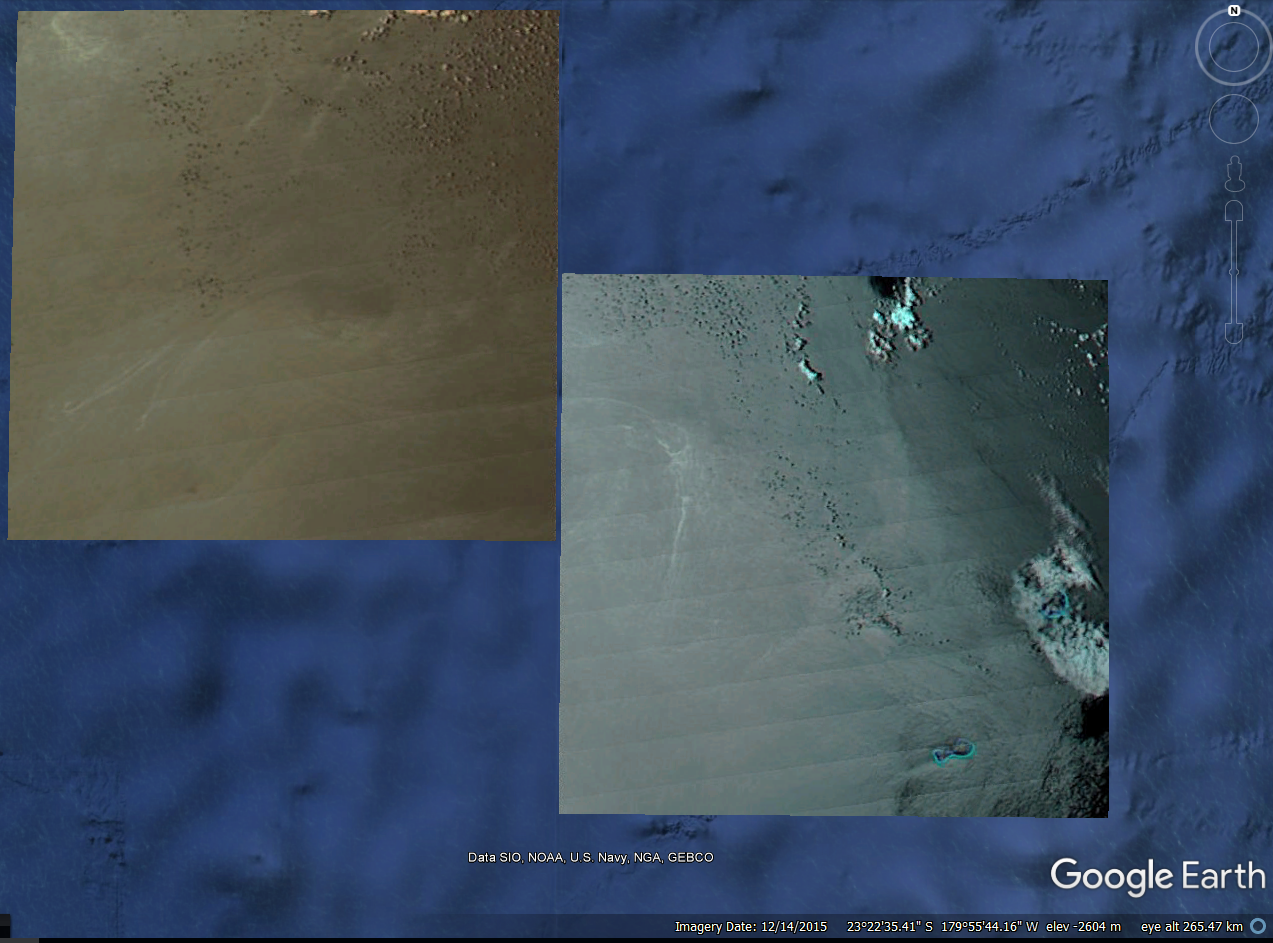 "We have not as yet been able to ‘back track’ the pumice in older images to confirm a source location," GeoNet added.

In October 2012, a much larger pumice raft was found in the Kermadec Islands north-east of New Zealand and later connected to the eruption of Havre submarine volcano.

Although the 2012 pumice was spread over a vast area of the South Pacific, the origin was initially a mystery, just like this one.

An undersea volcano several hundred kilometers to the north of the pumice – Monowai – had erupted on August 3, but an airline pilot reported seeing pumice as early as August 1. Two data sources provided clues to pinpoint the volcano: earthquake records and satellite imagery. After reports of the pumice rafts surfaced, scientists from Tahiti and New Zealand’s GNS Science connected the eruption with a cluster of earthquakes in the Kermadec Islands on July 17 and 18.

Working independently of GNS, volcanologist Erik Klemetti of the Eruptions Blog and NASA visualizer Robert Simmon examined a month’s worth of satellite imagery from NASA’s MODIS. They discovered the first signs of the eruption – ash-stained water, gray pumice, and a volcanic plume – in imagery from 9:50 a.m. and 2:10 p.m. (local time) on July 19, 2012. 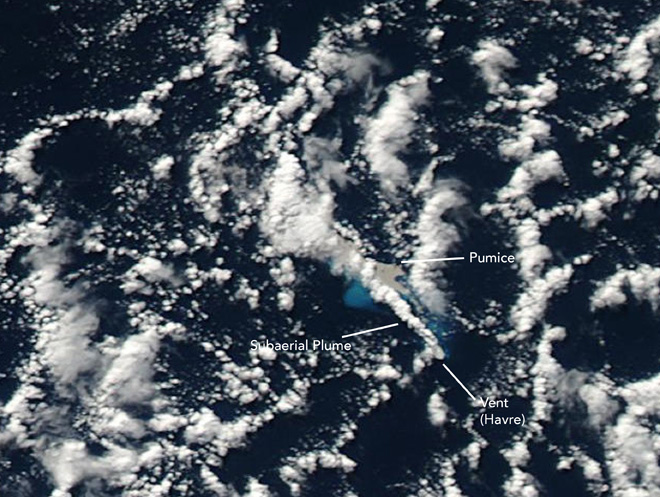 Although the recent pumice discovery coincides with New Zealand's major M7.8 Kaikoura earthquake of November 13, the connection cannot be confirmed at this time.

For reference, below is his full post published November 16, 2016. We've only made small edits (date where only a day of the week was mentioned) and our usual length and temperature conversions.

"Starting offshore North of New Zealand, we work our way south along the Kermadecs, beginning with Monowai submarine volcano, which had a brief bit of activity over the 11-12th November that lasted about 24 hours. This is normal behavior as we see a few days’ of activity every month.

Next is Raoul Island, nothing new is apparent there, only the Crater Lakes showing their usual summer warming cycle (climate induced). And it’s a similar situation at White Island. The volcanic tremor levels remain very low and although there have been a couple of earthquakes nearby we see that every other week as well. Auckland is quite too.

Moving on-shore, Okataina Volcanic Centre (this includes Tarawera) is quiet, just a couple of small shallow earthquakes near Kawerau and a half dozen to the south in Waikite Valley (a place no stranger to small earthquake swarms). There were also a couple of earthquakes near the Wairakei geothermal system.

Taupo Volcanic Centre is quiet, just 2 events so far this week. However, it is a very different story north of Kuratau (near Turangi) which experienced a sequence of earthquakes between the 10th and 13th of November. We had the story ready to run on Monday [November 14], but decided to hold off publishing it because we were focused on the bigger issues of the Kaikoura earthquake.

The sequence has come in four parts to date:

The earthquakes range in magnitude from a little less than 1.0 to magnitude 3.3. The earthquakes are located between 5 and 11 km [3.1 and 6.8 miles] deep, with the majority of these between 7 – 8 km [4.3 – 5 miles]. Small shallow earthquakes like these will be well felt by local residents and we have received many felt reports from the area. It is not clear if the sequence has finished yet. Prolonged earthquake swarms (sequences) are a regular feature of the Taupo Volcanic Zone. One near Matata in the mid-2000’s lasted several years.

Further south, the Tongariro-Ngauruhoe area is very quiet, just a couple of small earthquakes. The volcanic tremor at Ruapehu is slowly declining, heading back towards normal background levels. The lake temperature is now 31 ˚C [87.8 ˚F], slowly declining from the recent maximum of 39 ˚C [102.2 ˚F].

Mt. Taranaki continues its silent watch over the West Coast of the North Island.

So that ends our tour. And thankfully, it looks like the volcanoes have ignored the Kaikoura earthquake(s)."