The explosive activity at Guatemalan Fuego volcano has intensified since November 19, 2016 and has generated at least one 300 m (984 feet) high lava fountain, feeding three new lava flows. This is the 15th paroxysm at the volcano this year.

Moderate explosions are reported as well as several strong, accompanied by a column of ash that reaches an approximate height of 4.5 – 5 km (up to 16 404 feet) above sea level. 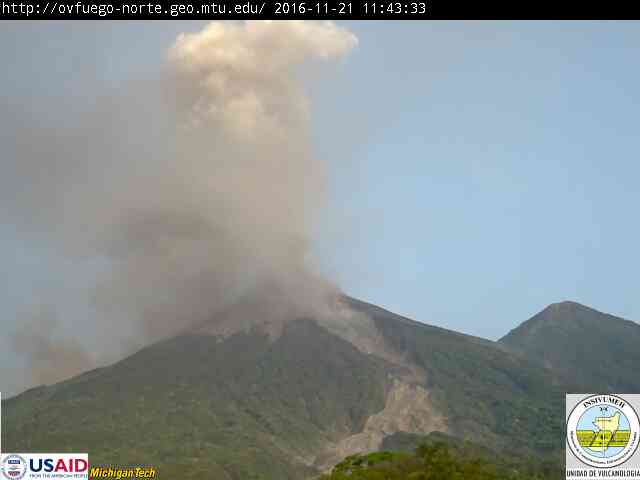 Ashfall was reported in Morelia, Santa Sofía and Panimaché I and II.

The eruption continues and there is a possibility of pyroclastic flows, INSIVUMEH said, and warned people not to stay inside or in the vicinity of the main ravines. 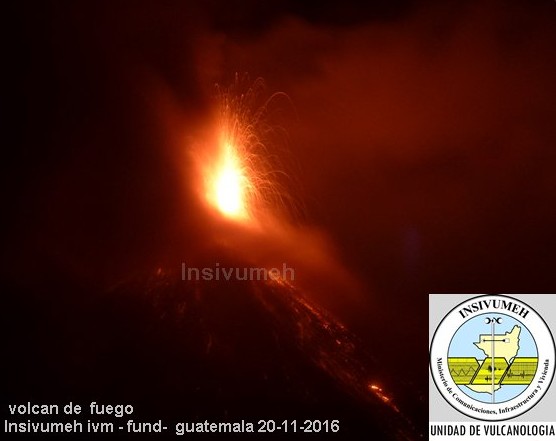 Volcán Fuego, one of Central America's most active volcanoes, is one of three large stratovolcanoes overlooking Guatemala's former capital, Antigua. The scarp of an older edifice, Meseta, lies between 3 763 m (12 345.8 feet high Fuego and its twin volcano to the north, Acatenango. Construction of Meseta dates back to about 230 000 years and continued until the late Pleistocene or early Holocene. Collapse of Meseta may have produced the massive Escuintla debris-avalanche deposit, which extends about 50 km (31 miles) onto the Pacific coastal plain.

Growth of the modern Fuego volcano followed, continuing the southward migration of volcanism that began at Acatenango. In contrast to the mostly andesitic Acatenango, eruptions at Fuego have become more mafic with time, and most historical activity has produced basaltic rocks. Frequent vigorous historical eruptions have been recorded since the onset of the Spanish era in 1524, and have produced major ashfalls, along with occasional pyroclastic flows and lava flows. (GVP)