A team of international scientists have found evidence that the sudden collapse of a volcano in the Cabo Verde Islands, off west Africa, generated a giant, 244 m (800 feet) tsunami that swallowed an island over 48 km (30 miles) away. The study was published in the Science Advances journal, on October 2, 2015, and it might provide new answers to an important question whether sudden giant collapses present a realistic hazard around volcanic islands today.

The massive collapse happened about 73 000 years ago at the Fogo volcano, one of the world's largest and most active island volcanoes. Today, the volcano is situated 2 829 m (9 300 feet) above the sea level, and erupts every 20 years. Its most recent eruption occurred during Autumn 2014. Generated tsunami most likely hit the today's Santiago Island, currently a home to about 250 000 people. 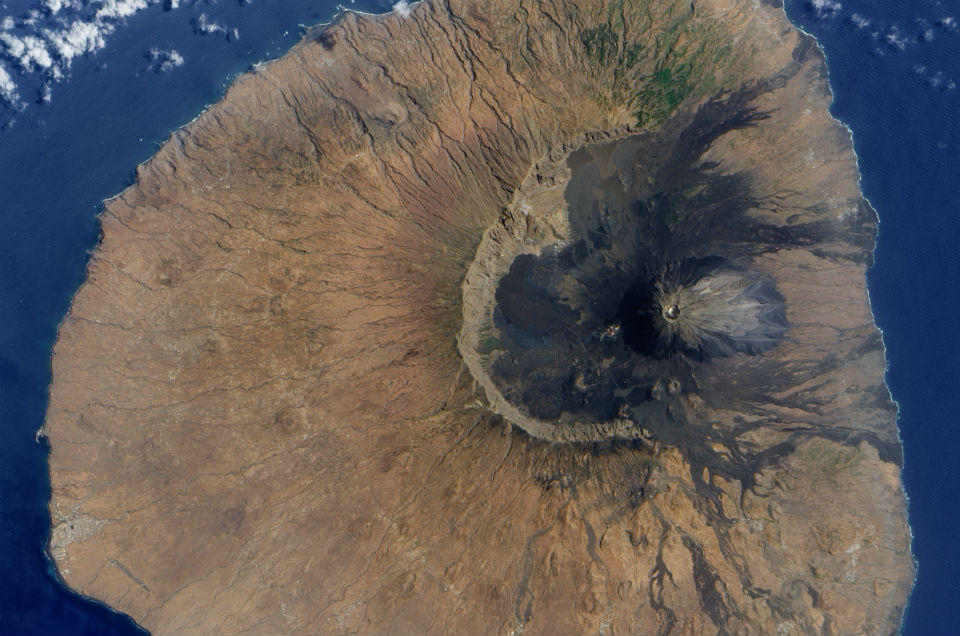 Geologists think the eastern flank of the Cape Verde islands' Fogo volcano crashed into the sea some 73,000 years ago, leaving this giant scar, and generating a gigantic tsunami. Image credit: NASA ​

It has already been established that volcanic collapse present a natural hazard, for example in the last few hundred years, at least 8 smaller collapses have occurred in Alaska region, some of which also produced deadly tsunamis. However, the new study suggests big volcanoes can collapse more suddenly and not gradually, as previously thought. For example, a French study conducted in 2011, has suggested the collapse happened about 124 000 – 65 000 years ago, in a series of landslides that generated multiple tsunamis reaching only 13.7 m (45 feet).

"Our point is that flank collapses can happen extremely fast and catastrophically, and therefore are capable of triggering giant tsunamis. They probably don't happen very often. But we need to take this into account when we think about the hazard potential of these kinds of volcanic features," said lead author Ricardo Ramalho, an adjunct scientist at Columbia University's Lamont-Doherty Earth Observatory. 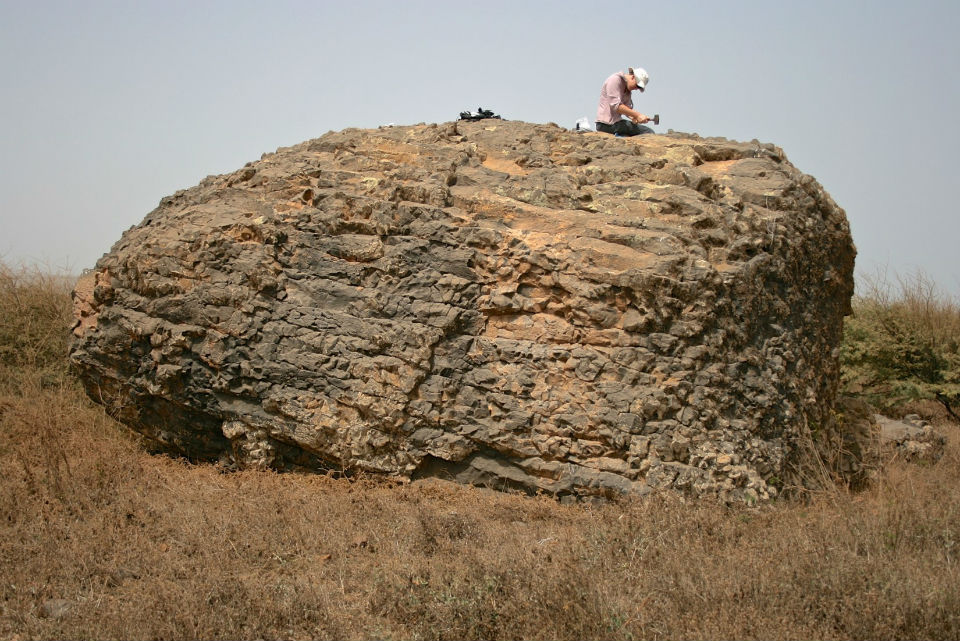 In order to test their hypothesis the scientists need to figure out when the big wave broke up shoreline cliffs into boulders carried inland. Ramalho and his colleagues have been collecting the samples to find out. Image credit: Ricardo Ramalho

Ramalho and his colleagues spotted unusual boulders lying 610 m (2 000 feet) inside Santiago, and about 198 m (650 feet) above sea level. Observed boulders are very different to the young volcanic terrain on which they lie are more similar to shoreline types of rocks, such as limestones, conglomerates and submarine basalts, with some of them weighing up to 770 tons (1 763 698 pounds). If they have been ripped off the shoreline and brought there by a gigantic wave, the size of the wave would have to be about 244 m (800 feet).

By measuring the isotopes of the helium embedded near the boulders' surfaces, the scientists estimated the event occurred about 73 000 years ago.

Tsunami expert Bill McGuire, a professor emeritus at University College London who was not involved in the research, said the study "provides robust evidence of megatsunami formation [and] confirms that when volcanoes collapse, they can do so extremely rapidly."

McGuire explained such megatsunamis most likely occur only once in about 10 000 years. "Nonetheless, the scale of such events, as the Fogo study testifies, and their potentially devastating impact, makes them a clear and serious hazard in ocean basins that host active volcanoes," he said.

The tsunami that inundated Santiago island is one of the largest known in the geological record. Boulders and other debris were ripped from the shoreline and hurled upward hundreds of feet. The wave was most likely about 244 m (800 feet) high, which is high enough to submerge the Statue of Liberty and reach the second-level observation deck of the Eiffel Tower. Image credit: Ricardo Ramalho

Ramalho cautions that the study should not be taken as a red flag that another big collapse is imminent here or elsewhere. "It doesn't mean every collapse happens catastrophically," he said. "But it's maybe not as rare as we thought."

James Hunt, a tsunami expert at the United Kingdom's National Oceanography Centre who was not involved in the study, said the research makes it clear that "even modest landslides could produce high-amplitude anomalous tsunami waves on opposing island coastlines." The question, he said, "is whether these translate into hazardous events in the far field, which is debatable."

Source: The Earth Institute, Columbia University, The Abstract of the paper – Science Advances

Featured image: Geologists think the eastern flank of the Cape Verde islands' Fogo volcano crashed into the sea some 73 000 years ago, leaving this giant scar, and generating a gigantic tsunami. Image credit: NASA