Yesterday, October 4th, something exploded on the far side of the sun and propelled a spectacular CME into space. The Solar and Heliospheric Observatory recorded the cloud as it emerged from behind the sun's limb: 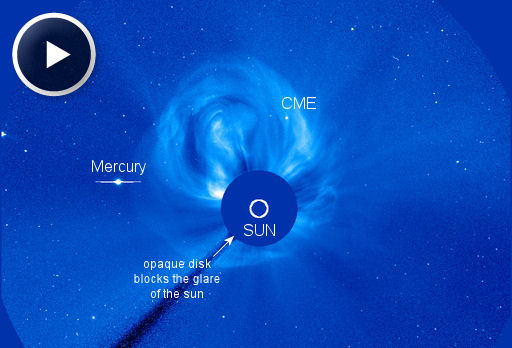 Analysts at the Goddard Space Weather Lab have combined observations from SOHO and the twin STEREO spacecraft to calculate the CME's trajectory: It is heading for Mercury. The CME will hit the innermost planet on Oct. 5th around 04:30 UT plus minus 7 hours. Energetic particles accelerated by shock waves at the leading edge of the cloud could also have minor effects on the MESSENGER probe in orbit around Mercury. The CME's forecast track shows that Venus might also receive a blow on Oct. 6th.

NOAA forecasters estimate a 30% chance of minor geomagnetic storms on Oct. 5th and 6th as a series of two to three CMEs sweeps past our planet. High-latitude sky watchers should be alert for auroras. (SpaceWeather)