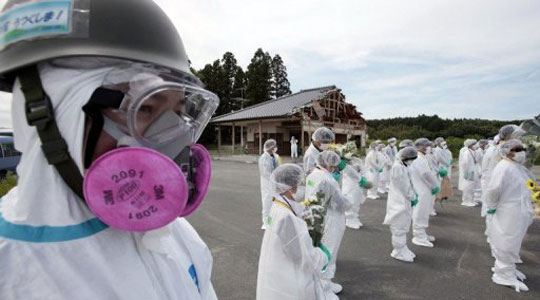 On 11 March 2011 there was a legal vacuum in Japan concerning radioactive waste resulting from a nuclear disaster. Current waste management Law places technical and financial responsibility for waste from natural disasters with local authorities. However, this excludes radioactive waste.

The Law on rehabilitation of contaminated soil excludes from its scope radioactive soils and waste. The Law on the management of radioactive materials and waste only concerns those inside the nuclear plants.

No lessons have been learnt from previous accidents on Japanese and Ukrainian soils. The case of a damaged and leaking reactor turning vegetation, buildings, roads, urban, natural, and aquatic areas outside a nuclear plant into radioactive waste had not been considered.

In Japan, incineration is the major means of waste disposal. There are hundreds of incinerators in urban areas. By the end of March, ash containing 100,000 to 140,000 Bq/kg of an “unknown radioactive substance” was recorded. Before the alert, a portion of the ash had been incorporated, according to usage, into the commercial production of cement. 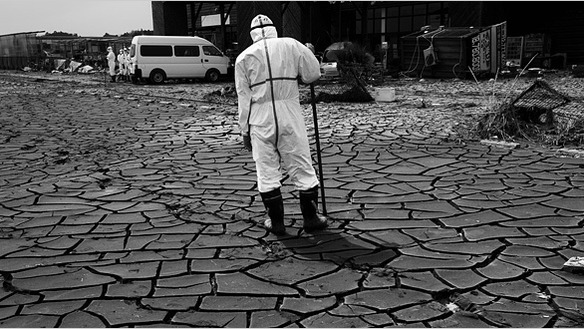 The ash contamination stems from the concentration of radioactivity incorporated into the biomass. Plants, tree leaves, bark, mosses, hedges, herbs and crops serve as the first receptacle for radioactive atmospheric fallout.

It seems that in a reflex action, to safeguard private property, citizens flocked to their lawnmowers, chainsaws, mowers, to significantly get rid of suspect vegetable matter just prior to, or just after the first explosions at the Fukushima Daiichi reactors. Additionally, these items of green waste were burned in household waste incinerators. The ashes concentrate in an order of magnitude of 10 times the radioactivity of the incinerated waste.

Since mid-March, radioactive contamination has spread to the northern half of the archipelago, without triggering a formal warning, technical and behavioural instructions, or even inter-regional solidarity. Furthermore, under an agreement signed 10 days prior to the disaster, incinerators in Matsudo in Chiba Prefecture exported to the remote Akita Prefecture, about 500 km to the north, 40 tons of ash containing nearly 50,000 Bq/kg of caesium-137.

They were partially buried in the municipal landfill in Kosamachi. Six containers were returned unopened to where they had originated. The city of Matsudo opened a temporary storage area in a car park for these ashes, whilst announcing that at the end of August the site would be saturated.

Sludge from water and sewage treatment plants have also became radioactive waste. They concentrated the radioactivity of rain and surface water running off roofs, buildings, roads, cars from both natural and wastewater sources. A rebound of radioactivity is anticipated following the disastrous flooding experienced this summer.

In mid-June, the Japanese Ministry of the Environment finally issued recommendations:

– Between 100 and 8,000 Bq/kg of Caesium-137: ash and sludge may be deposited in household waste landfills. The Tokyo electoral district buried 6000t in a disposal site along the bay.

– Between 8,000 and 100,000 Bq/kg: the waste can be landfilled in secure sites to be designated or existing sites dedicated to industrial waste. Constructive precautions such as roofing, the installation of geomembrane sealing or packaging, such as the encapsulation of drums of waste in concrete, shall be taken to reduce pollution of groundwater.

– Above 100,000 Bq/kg: the waste must be confined in sealed packaging and the storage perimeter will be surrounded by piles of concrete in order to absorb radiation. Sites remain to be designated and local population refusal has begun.

By way of comparison, in France, waste contaminated with 100 Bq/kg caesium-137 is normally considered Very Low Level waste and from 8000 Bq/kg as Intermediate Level waste. All these waste items should be stored in specialised ANDRA (National Agency for Radioactive Waste Management) sites.

As of 30 July, according to information released by the Japanese Ministry of Health, 37,000 tons of sludge are to be treated as radioactive waste.

As of the end of August, the Ministry of the Environment stated that the ash from 42 incinerators exceeds the threshold of 8000 Bq/kg and public service television and radio network Nihon Hoso Kyokai (NHK) surmised that there were now 50,000 tons of radioactive sludge. Some water treatment stations had to suspend their operations, their workers being exposed to unacceptable levels of radioactivity.

It has only been since 28 July that the Japanese government has made plans to develop legislation placing responsibility for radioactive waste scattered in Fukushima Prefecture and other affected prefectures under the technical and financial responsibility of the State. This law has still not been enacted and it would require TEPCO and all nuclear reactor operators to fund waste management.

Having failed to anticipate this type of radioactive contagion, Japan is in the process of simultaneously contaminating its logistical means and its household waste, water and sewage treatment facilities.

In May 2011, the government issued a waste management plan for the double disaster of the earthquake and tsunami: classification is encouraged. The roles of the three levels, governmental, prefectural, territorial, were reiterated and defined. Cooperation for the elimination of waste between the prefectures and regions is encouraged. The risks from asbestos, treated wood, dioxins and toxic waste in the wrecks of cars and ships were underlined. No mention about radioactivity.

In the port town of Ishinomachi, the tsunami waste was equivalent to 100 years of collection. The grouping of raw and sorted waste on temporary sites will take, according to estimations, another two to four years not to mention the complex recycling, disposal and monitoring phases which will last two to three decades.

The preliminary phase of consolidation has come up against a crisis regarding available space. Interim storage facilities are installed in parks, stadiums, wasteland, on tarmac. This sudden and significant intake is partly due to a shortage of legal landfills. Recycling of all materials is complicated by the presence or suspected radioactive contamination and salt deposits in plant or demolition waste submerged by the tsunami.

Incineration and co-incineration in cement kilns are encouraged by the government, prefectures and local authorities are eager to reduce waste volumes, while the radioactive contamination and salt deposits slow or prevent these operations.

The excess salt is a pollutant for cement and salt green waste emit dioxins while burning. The accumulation of wood waste could reach 20 million tons. It was also feared and found that around the demolition rubble there was high asbestos level. The Law on the total prohibition of the use of asbestos only dates back to 2006.

In the three tsunami target areas, one million tons of scrap metal would be available if they were to be eventually removed from the demolition magma and sorted, but even still recycling the second melting is going to cause problems with regard to technical acceptability due to radioactivity and subsequent risks for Japanese people and those further afield, should the scrap iron be exported.

This summer, a new aggravating factor emerged. The waste has been invaded by millions of flies and other insects attracted by decaying food and moisture. 200,000 tons of fish and other seafood products stored in ports in industrial freezers were destroyed or damaged.

A massive spraying of insecticide was carried out in June by the army or temporary fishing port workers. The Ministry of the Environment has stated that at least 55,000 tons of decomposing seafood were immersed across 50 miles of coastline.

Sludge and sediment, generated by the tsunami, will be ocean dumped under certain conditions subject to multiple interpretations, which open up new concerns for the sea and its resources. 130 plants processing and storing toxic products have been destroyed or damaged by the tsunami. Hundreds of oil spills have been visible to the naked eye. 25,000 hectares of land, greenhouses and agricultural cooperatives have been washed out. The sludge and sediment are poly-polluted.

Medical bodies have observed that amongst those most at risk from respiratory, asthma, skin and eye problems, a set of conditions had already been noticed after other disasters where the survivors were subjected to inhalation and clouds of toxic compounds and dust. (TerraDaily)