A severe geomagnetic storm (Kp=7 to 8) that began yesterday when a CME hit Earth's magnetic field is subsiding.

At the peak of the disturbance, auroras were sighted around both poles and in more than six US states including Michigan, New York, South Dakota, Maine, Massachusetts and Minnesota. Sky watchers at the highest latitudes should remain alert for auroras as Earth's magnetic field continues to reverberate from the CME impact.

The source of all this solar and geomagnetic activity is sunspot AR1302. Measuring more than 150,000 km from end to end, the sprawling active region is visible even without a solar telescope. 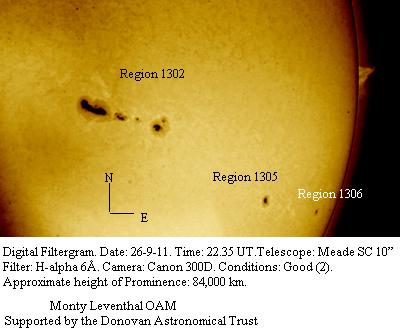 The sunspot has quieted down since unleashing dual X-flares on September 22nd and 24th. Nevertheless, NOAA forecasters estimate a 40% chance of more X-flares during the next 24 hours. Any such eruptions would be Earth-directed as the sunspot crosses the center of the solar disk. (SpaceWeather)