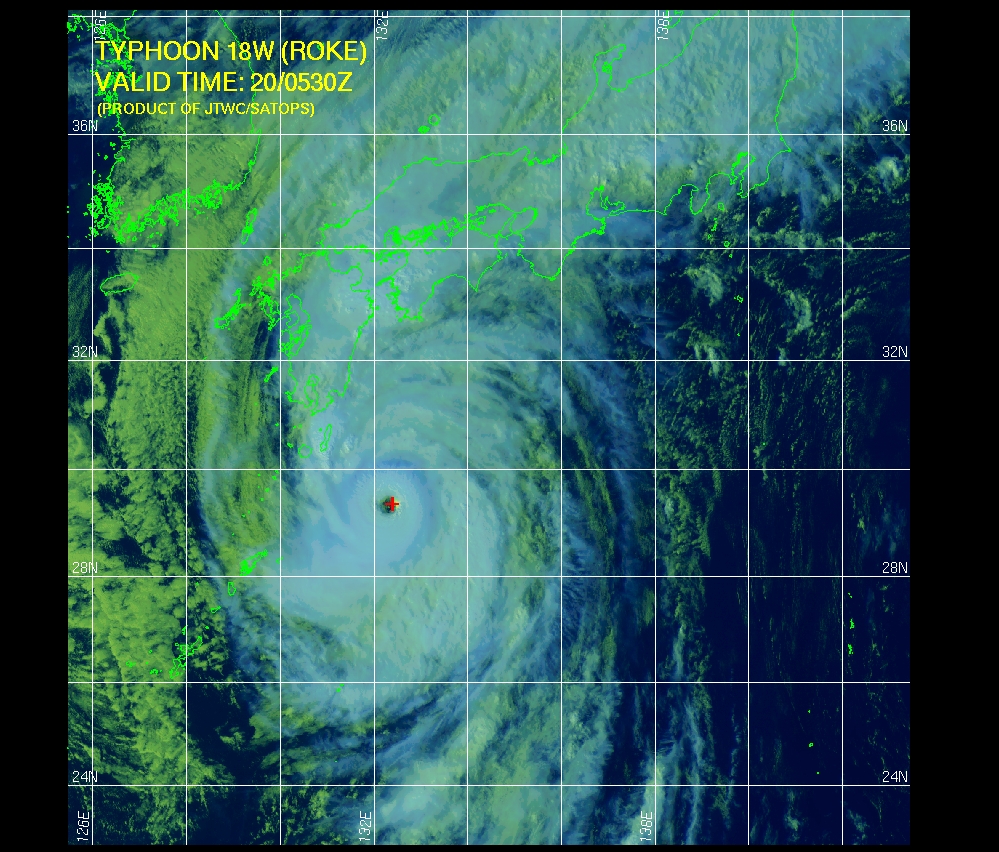 Typhoon Roke (Onyok) is the seventh typhoon and fifth major typhoon of the 2011 Asia Pacific typhoon season. The storm is currently located about 280 nautical miles south of Sasebo, Nagasaki Prefecture, Japan and is a category 3 typhoon with a maximum sustained wind speed of 100 knots (about 115 mph). Roke is expected to weaken to a strong tropical storm before making landfall over the southeastern coast of Honshu, Japan on September 21. A large portion of southern Japan, including more than 1.2 million people in Nagoya city, have been urged to evacuate ahead of the storm, which will impact areas that were devastated by mudslides and flooding from deadly Typhoon Talas earlier this month.

As of 1800 UTC, September 19, the center of Roke is located near 28.3N; 130.6E and moving north-northeast at 5 knots (6 mph). Roke is expected to accelerate northeast later today with gradual weakening and increasing in forward speed.

Roke rapidly intensified into a major typhoon within a few hours with a compact eye diameter of 18 km (10 nm). The storm is forecasted to move northeast, bringing it over the southeastern coast of Japan by Wednesday, September 21. The latest forecast indicates that the southeast coast of Honshu, Japan is likely to be affected by typhoon force winds from Tuesday night onward. Environment conditions are favorable and Roke is expected to remain at typhoon intensity for the next 24 hours. However, the storm is expected to weaken considerably on September 21 due to wind shear. Consequently, Roke is expected to make landfall as a strong tropical storm.

Roke is of moderate size with typhoon force winds extending 75 km (40 nmi) and tropical storm force winds extending out about 240 km (130 nmi). It is forecast to maintain its size for the next 24 hours. Atmospheric steering current would track Roke northeastward for the rest of the forecast period with an increase in forward speed as it encounters the northern westerlies. 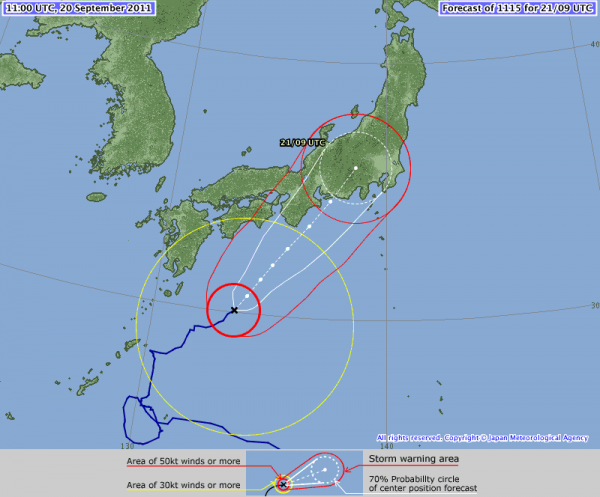 Warnings and advisories against typhoon force wind, ground loosening heavy rain, high waves and flooding have been issued for Kagoshima, Miyazaki, Oita, Fukuoka and Nagasaki region in southern Japan. Roke is expected to dump heavy rains at an estimated rate of 30 to 50 mm/hour within the warning area in southern Japan.

Workers trying to control leakage into the basements of nuclear reactors at the Fukushima-Dai-Ichi power plant may need to be evacuated ahead of the storm, with more than 6 inches (150 mm) of rain expected to fall over the reeling prefecture.

Already more than 16 inches (400 mm) of rain has been dumped on the southern province of Miyazaki, west of the storm’s center. The outlook for similar rainfall totals have prompted concerns of flooding and mudslides near Nagoya, where a main river could flood.

Meanwhile, Typhoon Sonca is a category 1 typhoon located approximately 500 nautical miles east of Misawa, Japan (38.8N, 151.6E). As of September 19 at 1800 UTC, the storm is moving east-northeast at 26 knots (30 mph) with maximum sustained winds of 65 knots (75 mph). Sonca is expected to weaken as it tracks over cooler water and higher wind shear. The storm poses no threat to East Asia. 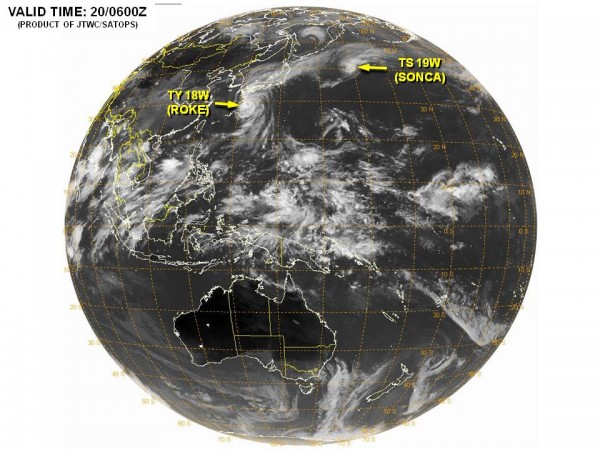