Dangerous Typhoon Roke, now the equivalent of a Category 3 hurricane, is set to be the strongest typhoon to hit Japan so far this year. Though the typhoon is expected to weaken to a Category 1 hurricane before roaring onshore over south-central Honshu Wednesday, it will unleash life-threatening flooding rain and mudslides. Near the point of landfall, wind damage could be severe. Tokyo and areas that were devastated by the massive earthquake and tsunami earlier this year will be affected.

Between 6 and 10 inches (150 to 250 mm) of rain is predicted to inundate places from Fukushima on north through northeastern Honshu, perhaps including Sendai. As of Tuesday, almost 22 inches of rain fell in Tokushima, Japan in only 36 hours.

Officials have already advised or ordered nearly 1.2 million people in central and western Japan to evacuate, reported NHK World. The majority of those evacuation orders and advisories have been for the city of Nagoya, which has already picked up roughly 9 inches (230 mm) of rain ahead of the typhoon.

As of Wednesday morning local time (Tuesday evening EDT), Roke was located approximately 330 nautical miles southwest of Yokosuka, Japan. Maximum winds were at 115 mph (185kph), making the typhoon the equivalent of a dangerous Category 3 hurricane. Wind gusts at landfall will range between 100 and 120 mph (160 and 190 kph) along the coast between Nagoya and Tokyo, according to Andrews. Typhoon-force gusts of 70 to 90 mph (110 to 145 kph) are possible in Tokyo by Wednesday afternoon.

Flight cancellations are a given for Tokyo’s bustling international airports, if they are not shut down entirely. 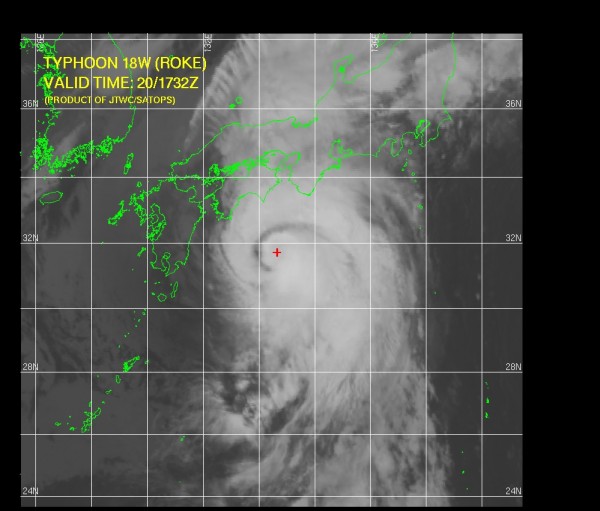 Once inland, Roke will weaken substantially. However, the threat for life-threatening flooding rain and mudslides will continue as it cuts across the middle of Japan, nearing the northeastern part of Honshu, which was devastated by earthquake and tsunami in March.

As of Tuesday evening local time (late Tuesday morning EDT), more than 16 inches (400 mm) of rain has fallen in the southern province of Miyazaki, which lies west of the storm’s center. Nearly 13 inches (330 mm) has inundated Tokushima on the island of Shikoku.

With similar rainfall totals projected for Nagoya, there is a major concern for mudslides and flooding along a main river in that area. (AccuWeather) 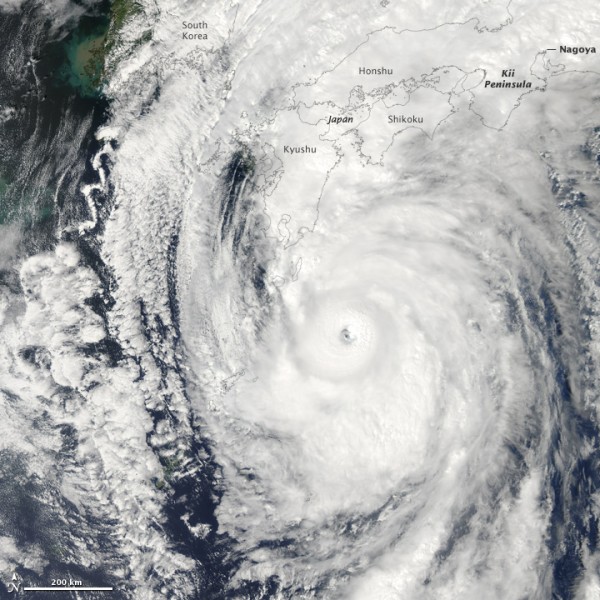 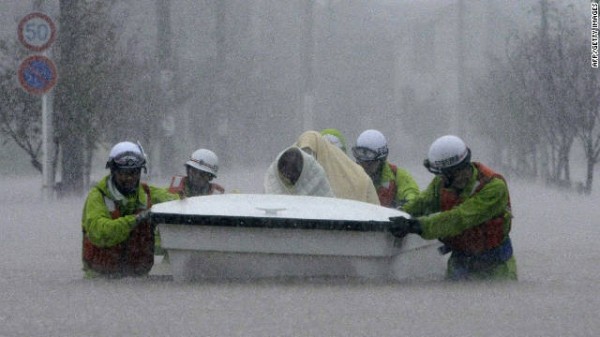