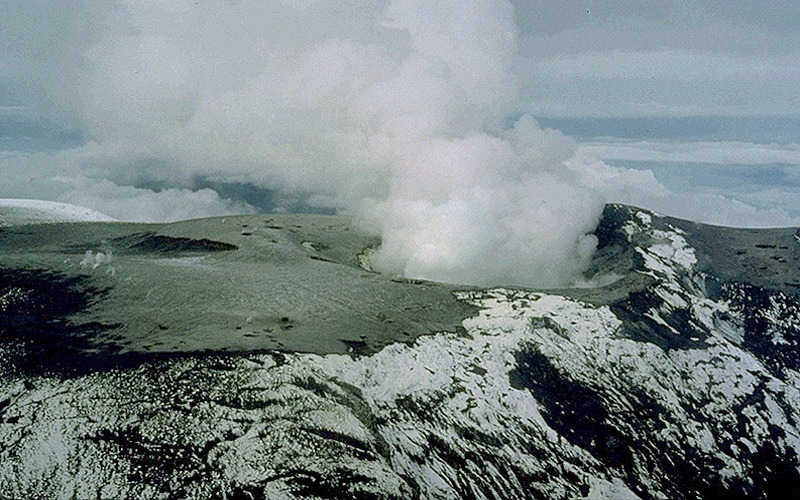 If you head over to the Colombian Survey, INGEOMINAS, you can find updates and statuses for all the major Colombian volcanoes. These include the well-known ones like Galeras and Ruiz, but also lesser known but no less interesting/hazardous like Huila or Machín. In fact, in the middle of the country is a stretch where four active volcanoes lie on a line that is only ~50 km long – Ruiz, Tolima, Santa Isabel and Machín. 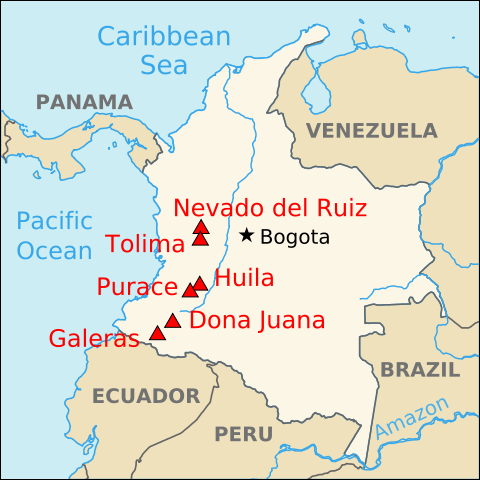 It has been almost 20 years since there has been any volcanic activity in these stretch of four volcanoes, but two are on yellow alert after signs that that dry spell of activity may be coming to an end soon. Ruiz and Machin are both on elevated alert status, but Machín is the more interesting of the two as it has likely been almost 900 years since it last erupted. The volcano is a dome complex that has produced pyroclastic flows and mudflows sourced from explosive eruptions, some of which traveled over 40 km from the domes in the ancestral caldera. There has been an increase in seismic activity – 139 earthquakes in August alone – under Machín for the past year or so (check out the webicorder), thus necessitating the increased alert status, but little else has changed. These earthquakes have been at two depths, from 1-5 km and 5-14 km below and to the southeast of the main domes. This potential activity has real ramifications in the region around Machín, such as decisions on where to build schools. 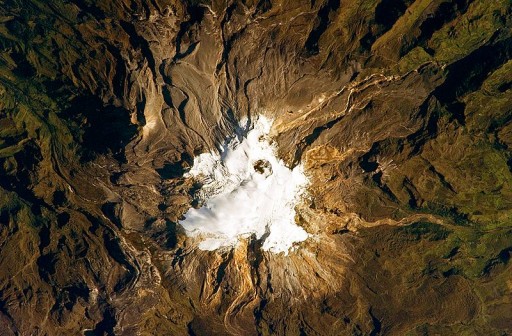 Over at the more famous Nevado del Ruiz, seismicity has increased dramatically over the course of 2011 (the 20 year anniversary since its last eruption). During the month of August alone, almost 400 likely volcanically-related earthquakes occurred at Ruiz. Sulfur dioxide measurements are listed as “moderate” but no signs of deformation have occurred at the volcano. All that shaking means that Ruiz is also on yellow alert status, suggesting that an eruption might be in the cards. There are no webcams that I have found for Ruiz, but you can see the live webicorder traces.

These two volcanoes are located close to populated areas – Manizalez and Pereira (my mother’s hometown) for Ruiz and Ibague for Machín, so they will be closely watched by INGEOMINAS for the slightest change in their activity. You can check out the hazard map for Ruiz and Machín to see where the likely damage will be done if either volcano decides to erupt again. (BigThink) 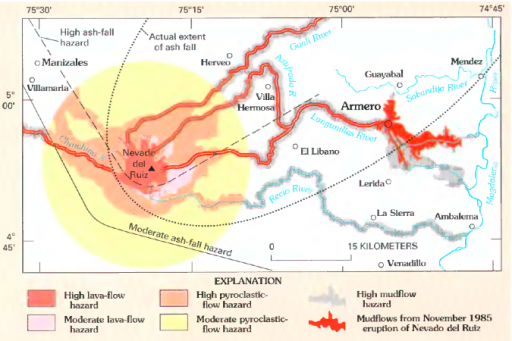 Nevado del Ruiz volcano in central Colombia, 130 km WNW of Bogota, is a broad, glacier covered volcano. A relatively small eruption in 1985 caused a devastating mud flow that killed almost 25,000 people in the town of Armero, marking one of the worst volcanic disasters in history. Sadly, this tragedy could have been easily avoided if clear warnings by volcanologists had been taken seriously. (GVP)

Nevado del Ruiz covers more 200 sq km and it is composed by 3 major andesitic and dacitic edificed of lavas and tuffs. The present-day cone is composed by lava domes built within the summit caldera of the older Ruiz volcano. Its summit contains the 1-km-wide and 240-m-deep Arenas crater. The prominent La Olleta flank cone on the SW flank was probably built in historic time. Nevado del Ruiz has repeatedly produced large mud flows (lahars), triggered by melting of the summit glacier during eruptions. Deposits of these mud flows are found on its broad flanks and these events have been known since the 16th century. (VolcanoDiscovery)