Australian Geoscience (instruments relatively close to PNG) has a magnitude of 6.3 but a far better depth of 62 km (much weaker shaking).

PNG houses are mostly build out of wood and have a very high resistance against earthquakes. This is the tenth major earthquake to strike the globe in the month of September. 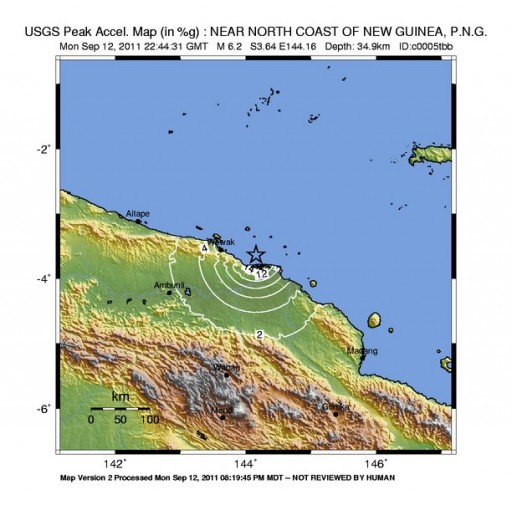 The island as a whole has an area of 868,000 km, which the eastern 462,800 km is part of Papua New Guinea. Both geologically and topographically, the country is very new. It is situated in a zone where the earth’s crust is very weak, on the boundary between two tectonic plates, those of the ancient continent of Australia and of the Pacific Ocean. It forms part of the so-called “Ring of Fire” around the edge of the Pacific, and most of the country has been formed by comparatively recent earth movements and volcanic activity.

The islands of New Britain and bougainville have active volcanoes and experience earthquakes of up to 5 on the richter scale from time to time. (PNGEmbassy)