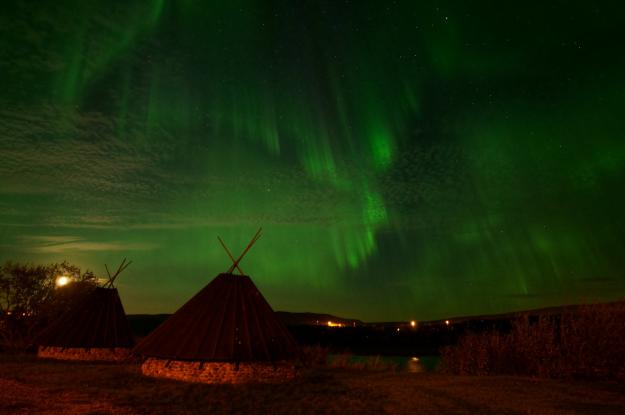 UPDATE: The Geomagnetic Storm has subsided over the past few hours. However, the solar wind remains energized and occasional pulses of activity are expected for another 24 hours. Region 1283, the responsible party back at the Sun, decayed today.

The Geomagnetic Storm intensified to G2 (Moderate) due to prolonged southward Bz. But the solar wind magnetic field vector has weakened in the last hour, so possibly the teeth of the storm has now just passed. More updates later. (SWPC)

A strong geomagnetic storm is in progress following the impact of a CME around 7:30 EDT on Sept. 9th. This could be the first of several hits from a series of CMEs expected to reach Earth during the weekend, related to the sunspot 1283 flares during the week. High-latitude sky watchers should be alert for auroras after nightfall.

A high-speed solar wind stream flowing from a large coronal hole should reach Earth on Sept. 11-12 sparking even more aurora.

A third and fourth flare have erupted from sunspot 1283. The third came on September 7 at 6:36 PM ET, and was categorized as an X1.8 by the GOES spacecraft, making it the second X-class flare within 24 hours. There was a coronal mass ejection (CME) associated with all three of the recent flares, but none of them are expected to travel directly toward Earth, and the first two were unlikely to cause aurora. NASA computer models suggest that the latest CME may give a glancing blow to Earth on the morning of September 11, and might create some aurora.

The fourth flare from this same sunspot was detected by GOES at 11:36 AM ET on September 8. This was an M6.7 flare, considered moderate. (NASA) 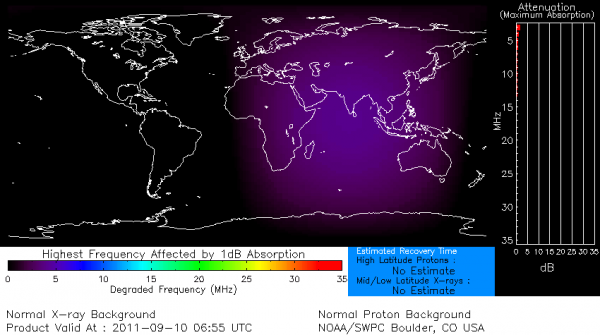 NOAA/SWPC Geophysical Activity Summary 08/2100Z to 09/2100Z:
Geomagnetic field activity began the period at quiet levels then increased to active to major storm levels after 09/1245Z. An isolated severe storm period was observed from 09/1500 – 1800Z. Two sudden impulses (SI) were observed at 09/1243Z and 09/1250Z (16nT and 28nT respectively, as measured by the Boulder USGS magnetometer).
At 09/1150Z, ACE data indicated an interplanetary shock arrival preceding the Boulder SIs. Bt reached up to 25nT, Bz dropped to -23nT, density spiked up to 35p/cc, wind speeds peaked at 602km/s, and temperature increased. Activity was due to combined CMEs associated with 06 – 07 September major flare activity. The greater than 2 MeV electron flux at geosynchronous orbit reached high levels during the period.

Solar Activity Forecast: Solar activity is expected to be moderate during the period (10 – 12 Sept.) with a slight chance for another X-class flare from Region 1283.

Geophysical Activity Forecast: The geomagnetic field is expected to be active on day 1 (10 Sept.) due to continuing CME effects. Activity is expected to decrease on day 2 (11 September) to unsettled levels with a chance for active periods as CME effects subside, but a recurrent coronal hole high speed stream (CH HSS) will become geoeffective. Day 3 (12 September) unsettled activity is expected to continue under the effects of the CH HSS. There will be a slight chance for a greater than 10 MeV proton event at geosynchronous orbit during the period.