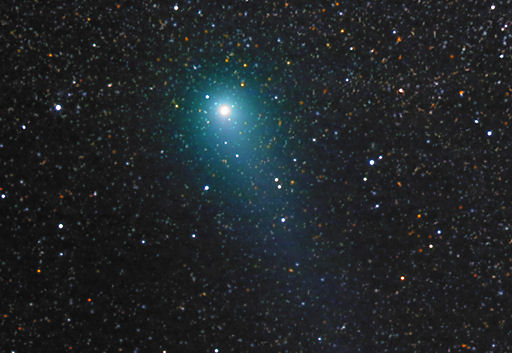 As September begins, green Comet Garradd is gliding across the star fields of the Milky Way in the early evening sky. The icy visitor from the outer solar system is not yet visible to the naked eye, but it looks great through amateur telescopes.

Astrophotographer Pete Lawrence of Selsey UK points out that Comet Garradd is approaching Brocchi’s Cluster, also known as “the Coathanger.” Lawrence photographed the approach on August 31st. The best night for a photo opportunity between Garradd and The Coathanger is on the 2nd of September leading into the morning of the 3rd, when the comet will pass very close to the hook of the hanger.

At the moment, Comet Garradd is a purely telescopic object. It is, however, approaching the sun and brightening. Recent projections place it at peak magnitude 6, on the threshold of naked-eye visibility, in February 2012. Because Comet Garradd is a first-time visitor to the inner solar system, it could behave in unexpected ways, perhaps exceeding those expectations. (SpaceWeather)

G. J. Garradd (Siding Spring Observatory, Australia) discovered this comet on four images obtained between 2009 August 13.77 and August 13.81. He was using the 0.5-m Uppsala Schmidt telescope and a CCD camera. The magnitude was given as 17.5-17.7 and the coma was described as circular and 15″ across. The first confirmation was obtained by W. Robledo (El Condor Observatory, Cordoba) on August 14.17.