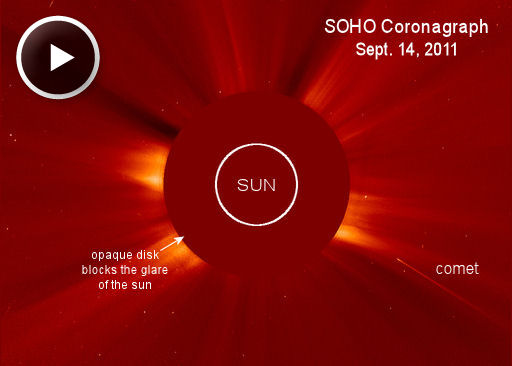 On September 14, the Solar and Heliospheric Observatory (SOHO) watched what happened when one comet got too close. Click on the arrow to play a 6-hour time lapse movie:

One icy comet went in, none came out. Discovered on Sept. 13th by Michal Kusiak of Poland and Sergei Schmalz of Germany, the doomed comet was a member of the Kreutz family. Kreutz sungrazers are fragments from the breakup of a single giant comet many centuries ago. They get their name from 19th century German astronomer Heinrich Kreutz, who studied them in detail. Several Kreutz fragments pass by the sun and disintegrate every day. Most, measuring less than a few meters across, are too small to see, but occasionally a big fragment like this one attracts attention.(SpaceWeather)

Sungrazing comets have been observed for many hundreds of years. In the late 1880's and early 1890's, Heinrich Kreutz studied the possible sungrazing comets which had been observed until then and determined that some were sungrazers and some were not. He also found that those which were indeed sungrazers all followed the same orbit. That is, they were all fragments of a single comet which had broken up. It is probable that the original comet, and its fragments, have broken up repeatedly as they orbit the sun with a period of about 800 years. In honor of his work, this group of comets is named the Kreutz sungrazers.

The Kreutz sungrazers come within about 50,000 km (perihelion distance of 0.005 AU) of the solar surface. Thus, sungrazing comets just pass through the solar atmosphere. For that matter, all known comets pass through the sun's atmosphere, because the sun's atmosphere — the corona — extends way, way beyond Pluto. (We don't yet know where the corona ends, but we may actually know in just a few years. One of the Voyager spacecraft will get to the boundary eventually) We only know about a comet when it becomes active. The reason a comet becomes active is because it is heated by the Sun. The distinct tails form because of the influence of the Sun, by radiation and by the solar wind. 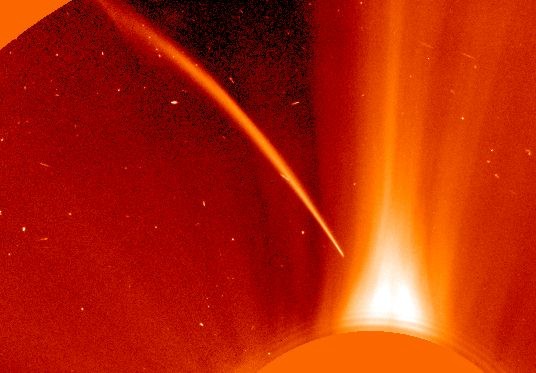 Sungrazing comets have been observed possibly as far back as the year -371. Brian Marsden has speculated that a comet seen by Aristotle and Ephorus may be a Kreutz sungrazer. However, until 1979, only about 9 sungrazing comets had been seen, all from the ground.

Then, beginning in 1979, space-based observatories began to detect sungrazing comets. These observatories are instruments known as coronagraphs. A coronagraph is designed to look at the solar atmosphere. In order to do that, an artificial eclipse is created by occulting (blocking out) the bright disk of the sun.

The SOLWIND instrument on the P78-1 satellite discovered 6 sungrazers between 1979 and 1984. You may remember the P78-1 satellite because it was actually destroyed, on purpose, from the ground in a US military exercise. It was a satellite which had lived out its scientifically useful life anyway.

The CP coronagraph on the Solar Maximum Mission (SMM) discovered 10 sungrazing comets between 1987 and 1989. SMM also observed the comet discovered by SOLWIND in 1984. You may remember the SMM satellite because it was retrieved by the Space Shuttle in 1984, repaired in space, and returned to orbit. That was the first time the shuttle had ever retrieved an object in space, so it was also the first time a satellite had been repaired in space. (sungrazer.nrl.navy.mil)