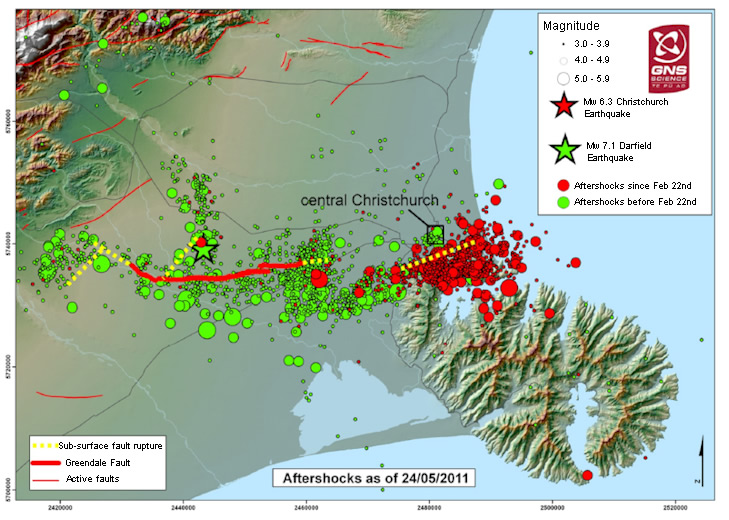 The work, involving refined earthquake analysis and geophysical surveys, is part of the effort by the Natural Hazards Research Platform to help inform recovery work in Christchurch. Scientists from GNS Science, NIWA, the University of Canterbury, University of Otago, and the University of Calgary are contributing to this ongoing project. The aim of the investigations has been to understand more about the pattern of aftershocks and shed light on where future earthquakes might occur.

The forecasting of aftershocks and possible triggered earthquakes is based on New Zealand and worldwide earthquake statistics. These point to the possibility of earthquakes in the magnitude 6 to 7 range in Canterbury in the coming year, and possibly beyond. Scientists have estimated the probability of an earthquake of this size occurring in the next year at 23 percent for the entire aftershock region, and about 6 percent for the Christchurch city area. Geophysical surveys have been carried out over the past two months to identify possible bedrock faults that might generate earthquakes of this size.

Manager of the Natural Hazards Research Platform, Kelvin Berryman, emphasised that even though the findings were preliminary they had confirmed there is a complex arrangement of faults in the bedrock under Canterbury and offshore under Pegasus Bay. Most of these faults had their major period of movement prior to about 50 million years ago.

“The focus of the investigation is to identify the length, orientation and spatial arrangement of faults in the aftershock zone in Canterbury,” Dr Berryman said. “For an earthquake of magnitude 6 or greater to be generated, a fault of 10km or more in length is needed.” 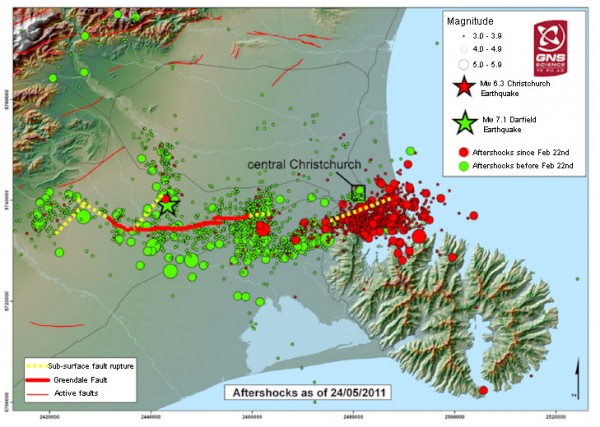 It was important that data from the earthquakes and the three different geophysical techniques – seismic, gravity, and magnetics – was taken as a whole. Even before the investigation started, it was widely known that there were several dozen active faults within an 80km radius of Christchurch and many were capable of producing a damaging earthquake.

In April the University of Canterbury, working with the University of Calgary, undertook a total of 45km of seismic reflection surveys at four separate areas across Canterbury and in Christchurch City. The focus was mainly on areas where particularly rich patterns of aftershocks had occurred to identify the bedrock faults that these were occurring on. The profiling produced images of the subsurface geological structure to a depth of up to 2km.

Professor Jarg Pettinga, of the University of Canterbury, who led the onshore seismic surveys, said the data had revealed several previously unknown fault structures mostly trending northeast-southwest. Preliminary analysis of the data suggests that scientists have been able to identify bedrock structures on which the magnitude 5.3 Boxing Day and magnitude 6.3 February 22 earthquakes occurred.

“They appear to be very old faults in the basement rock that may have been weakly reactivated. Cantabrians live in a seismically active area, and finding previously unknown faults that seem to have very long intervals between ruptures won’t have significantly increased the level of earthquake hazard in the region,” Prof Pettinga said.

During March NIWA’s research vessel Kaharoa, equipped with seismic gear surveyed an area of about 800 square kilometres of southern Pegasus Bay to map fault structures under the seabed.

The survey, undertaken in collaboration with the University of Otago, confirmed widespread offshore faulting in basement rocks with a small number of faults showing evidence of reactivation in the more recent geological past.

“There are younger fault structures that are active and they are reactivating the older faults,” said NIWA principal scientist Philip Barnes.

The survey had revealed a previously unknown offshore fault that was about 25km-long – similar in length to the Greendale Fault and therefore potentially capable of generating an earthquake of magnitude 6 to 7. Overall, most of the offshore faults are slow moving and their rates of activity are similar to the slowest moving faults anywhere in New Zealand.

“Understanding the earthquake hazard for the coming years and decades requires an assessment of all the faults in the region, and learning about their rates of activity and earthquake potential.”

This continuing assessment would be conducted in parallel with the evolving aftershock sequence, Dr Barnes said (GNS Science)