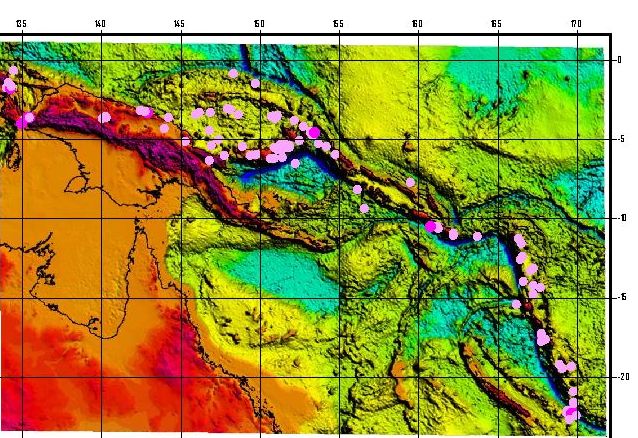 A powerful earthquake of 6.5 degrees in the Richter scale was recorded at Bouganville region, Papua New Guinea at 18:37 UTC (15/05). The violent quake had its epicenter estimated to 43 km depth, under the coordinates 6.15S and 154.44E. Despite the great intensity, depth at which the event ocurred favors the dissipation of energy before reaching the surface. When it occurs in the ocean, events in this intensity and depth can trigger the formation and alerts of tsunamis. Of the total number of events, 36 of them were classified as mild and 6 reached the status of moderates. 2 tremors were rated between strong and very strong. 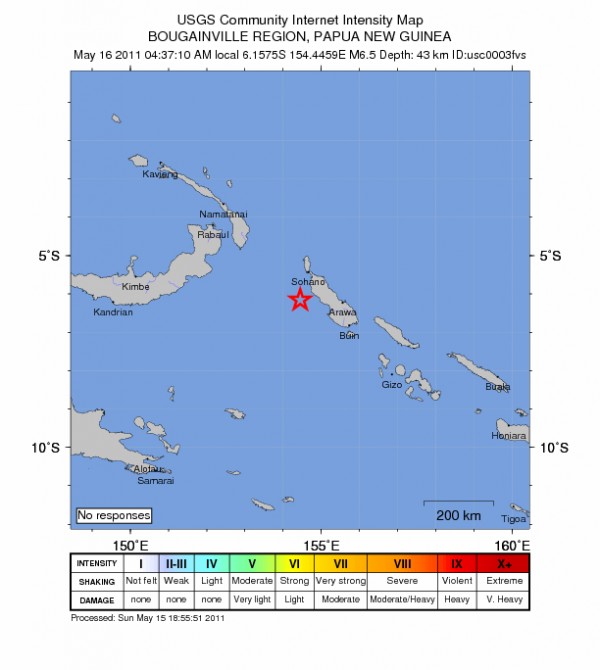 Seismic geology of Papua New Guinea
The details of the Cenozoic tectonic evolution of New Guinea are the subject of some debate. The most commonly published scenario is the subduction polarity reversal (or arc reversal) model which entails movement of the Australian continental crust and mantle into a northward dipping subduction zone, followed by collision and initiation of southward subduction of the Pacific plate at the New Guinea Trench (Dewey and Bird, 1970; Hamilton, 1979; Milsom, 1985, Dow et al., 1988; Katili, 1991). A second model proposed to explain relationships in eastern New Guinea shows the island underlain by a doubly-dipping slab of oceanic lithosphere (“zippering” model), which is the westward continuation of the subducted Solomon plate (Ripper and McCue, 1983; Cooper and Taylor, 1987). A third model is similar to the first, but the subducted Australian plate is simply dipping vertical without a reversal in subduction direction (Johnson and Jaques, 1980). Both of these later models require significant oblique convergence across most of the island.

All of these authors agree that southern New Guinea is underlain by the passive northern margin of the Australian continent which was thickly blanketed from the early Mesozoic by siliciclastics grading into Cenozoic carbonate strata. Most of these authors argue for one major collisional event with an oceanic island arc. Based on the change from carbonate sedimentation to widespread clastic sedimentation derived from orogenic uplifts, the collision apparently began in the late Miocene (Visser and Hermes, 1966; Dow and Sukamto, 1984a; Dow et al., 1988). However, based on the metamorphic age of rocks in Papua New Guinea and the island arc terrane, some workers conclude that the collision began in the early Oligocene (Pigram et al., 1989; Davies, 1990). To account for these relationships, Dow et al. (1988) propose that New Guinea is the product of two distinct island arc-continent collisions: one during the Oligocene and a second during the Miocene (Melanesian Orogeny). Quarles van Ufford (1996) proposes that the island is the site of two orogenic events that are spatially and temporally distinct. The earlier (Eocene-Oligocene) event, termed the “Peninsular orogeny,” was restricted to the Bird’s Tail region of easternmost New Guinea. 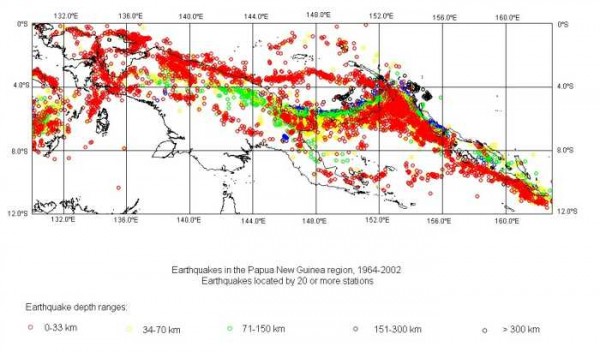 The generation and erosion of a significant landmass is recorded in Oligocene and younger clastic sedimentation in the Aure Trough. The “Central Range orogeny,” on the other hand, was an event that began in the middle Miocene and generated the present width of the island and caused widespread clastic sedimentation. Importantly, Quarles van Ufford (1996) divided the Central Range orogeny into pre-collisional and collisional stages. The pre-collisional stage is related to the bulldozing and metamorphism of passive margin sediments in a northward-dipping subduction zone. The collisional stage only occurs when buoyant Australian lithosphere actually jams the subduction zone (Cloos, 1993) and crystalline continental basement becomes involved in the deformation. Collisional delamination is proposed as the tectonic process that occurred within the subducting Australian lithosphere between 7 to 3 Ma. Besides involvement of crystalline basement, this process causes late-stage igneous activity and a vertical mountain uplift of 1 to 2 km. This process culminated with the initiation of the E-W trending, left-lateral strike-slip that dominates the recent tectonics of western New Guinea. (Wikibooks)