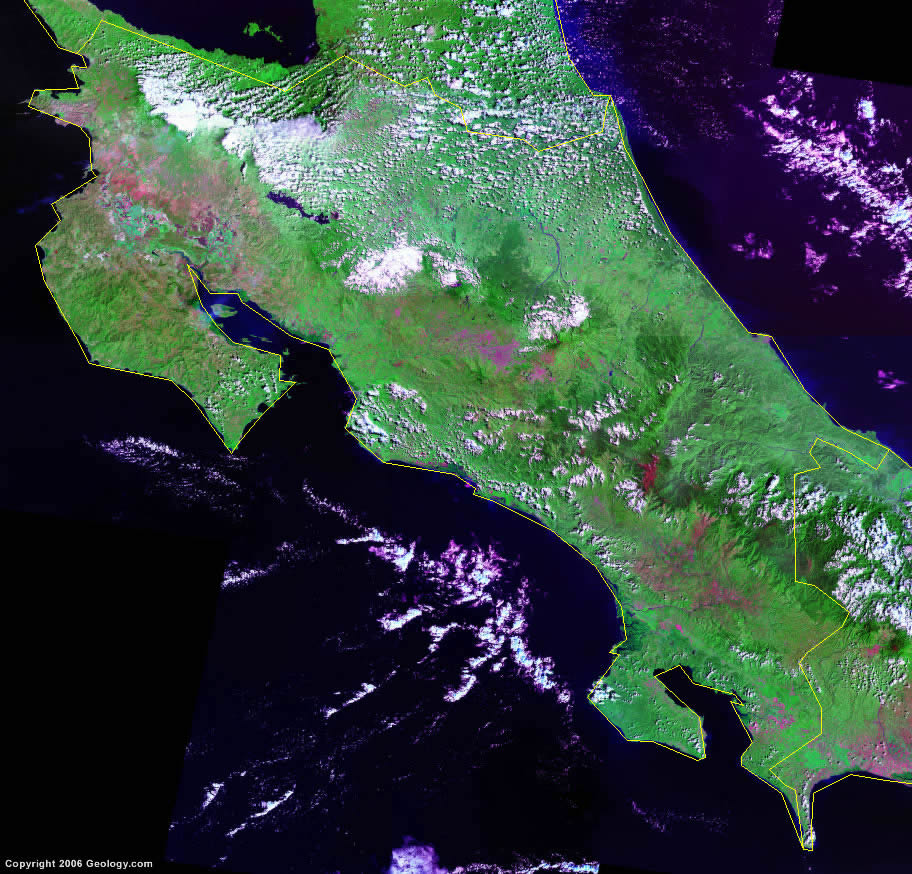 A deep 6.0 magnitude earthquake struck in the middle of Costa Rica at a depth of 70 km. A 6.0 magnitude earthquake shook the capital city of Costa Rica on Friday afternoon, the U.S. Geological Survey said. The quake was felt strongly in San Jose but there were no immediate reports of damage or injuries, said Juan de Dios Castillo, spokesman for Seismological and Volcanic Institute. The quake’s epicenter was in Santiago de Puriscal, a province west of San Jose. It struck about 4:48 p.m. local time and had a depth of about 44 miles. (NPR) 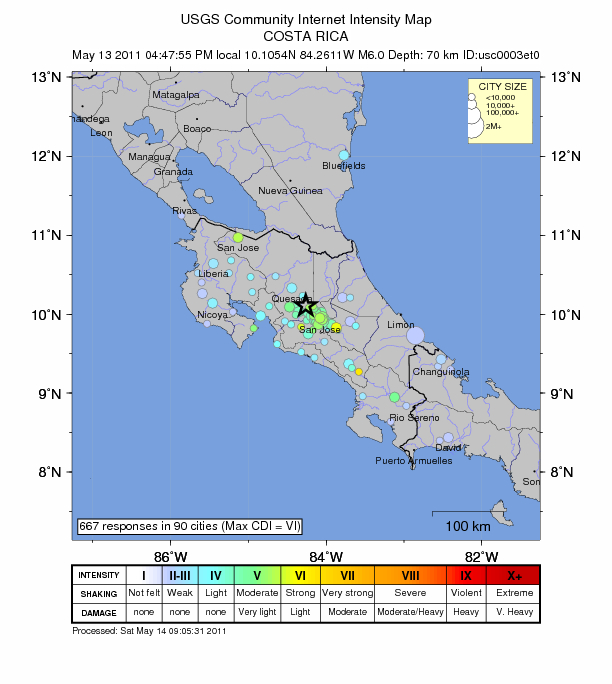 Costa Rica lies at the boundary where the Pacific’s Cocos Plate–a piece of the earth’s crust some 510 km wide–meets the crustal plate underlying the Caribbean. The two are converging as the Cocos Plate moves east at a rate of about 10 cm a year. It is a classic subduction zone in which the Caribbean Plate is forced under the Cocos–one of the most dynamic junctures on earth. Central America has been an isthmus, a peninsula, and even an archipelago in the not-so-distant geological past. It has therefore been both a corridor for and a barrier to landward movements, and it has been an area in which migrants have flourished, new life forms have emerged, and new ways of life have evolved. Yet a semblance of the Central America we know today became recognizable only in recent geological history. In fact, Costa Rica has one of the youngest surface areas in the Americas–only three million years old–for the volatile region has only recently been thrust from beneath the sea.

In its travels eastward, the Cocos Plate gradually broke into seven fragments, which today move forward at varying depths and angles. This fracturing and competitive movement causes the frequent earthquakes with which Costa Ricans contend. The forces that thrust the Cocos and Caribbean Plates together continue to build inexorably.

From insignificant tremors to catastrophic blockbusters, most earthquakes are caused by the slippage of masses of rock along earth fractures or faults. Rocks possess elastic properties, and in time this elasticity allows rocks to accumulate strain energy as tectonic plates or their component sections jostle each other. Friction can contain the strain and hold the rocks in place for years. But eventually, as with a rubber band stretched beyond its breaking point, strain overcomes frictional lock and the fault ruptures at its weakest point.

Suddenly, the pent-up energy is released in the form of an earthquake–seismic waves that radiate in all directions from the point of rupture, the “focus.” This seismic activity can last for a fraction of a second to, for a major earthquake, several minutes. Pressure waves traveling at five miles per second race from the quake’s epicenter through the bedrock, compressing and extending the ground like an accordion. Following in their wake come waves that thrust the earth up and down, whipping along at three miles per second.

For Costa Ricans, the bad news is that the most devastating earthquakes generally occur in subduction zones, when one tectonic plate plunges beneath another. Ocean trench quakes off the coast of Costa Rica have been recorded at 8.9 on the Richter scale and are among history’s most awesome, heaving the sea floor sometimes scores of feet. These ruptures often propagate upward, touching off other, lower-magnitude tremors. This is what happened when the powerful 7.4 quake struck Costa Rica on 22 April 1991. That massive quake, which originated near the Caribbean town of Pandora (112 km southeast of San José), left at least 27 people dead, more than 400 injured, 13,000 homeless, and more than 3,260 buildings destroyed in Limón Province. The earthquake caused the Atlantic coastline to rise permanently–in parts by as much as 1.5 meters. In consequence, many of the beaches are deeper, and coral reefs have been thrust above the ocean surface and reduced to bleached calcareous skeletons. 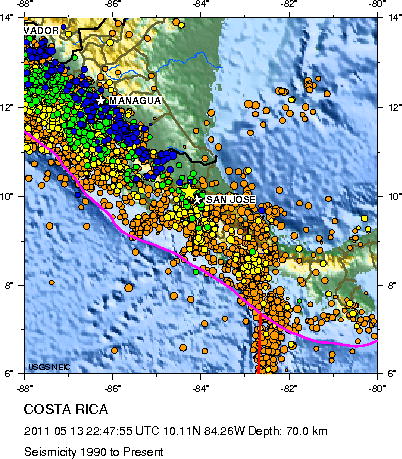 Until the 1960s, when the theory of plate tectontics revolutionized the earth sciences, geologists trying to explain the distribution of earthquakes and volcanoes were at a loss. When earthquakes and volcanoes were plotted on a map, geologists realized that the planet is a puzzle–literally. The pieces of the terrestrial jigsaw are some 25 tectonic plates, interconnected pieces of the earth’s crust (the lithosphere), 40-95 miles thick. Seven major plates carry the continents and ocean basins on their backs.These plates are in continual motion, ponderously inching along on endless journeys across the surface of the earth, powered by forces originating deep within the earth. They ride on a viscous layer called the aesthenosphere, with a molten component welling up to the earth’s surface on great convection currents fueled by heat from the core of our planet.

As the plates move, they pull apart or collide, unleashing titanic geological forces. When two plates slide past each other or converge–as off the Pacific coast of Central America–the geological forces generally drive one plate beneath the other, causing earthquakes. The friction created by one plate grinding beneath another melts part of both crusts, forming magma–molten rock–which wells up under pressure, erupting to form a chain of volcanoes.(CentralAmerica.com)